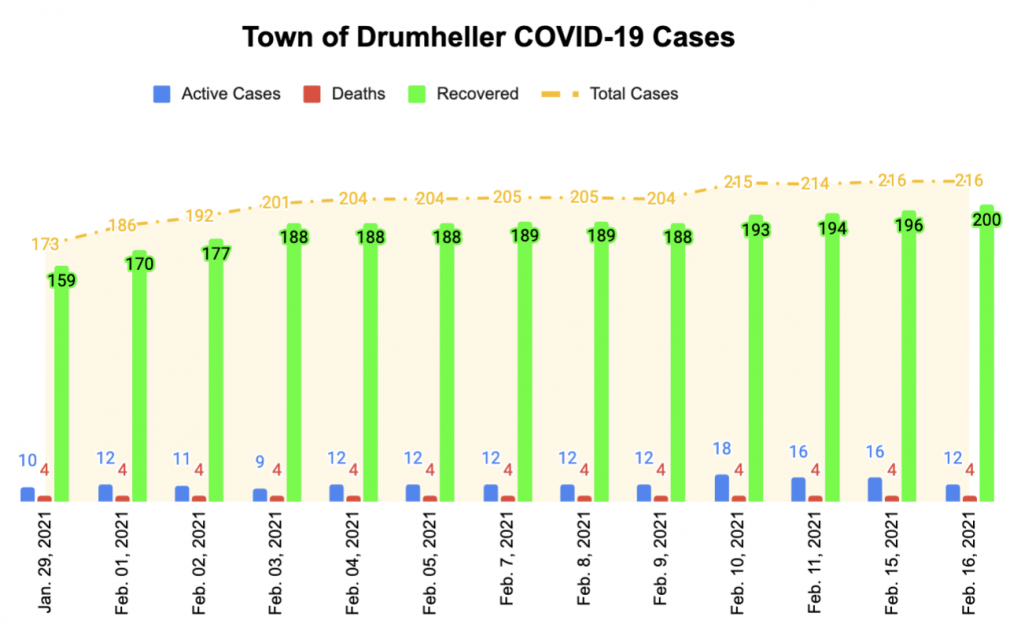 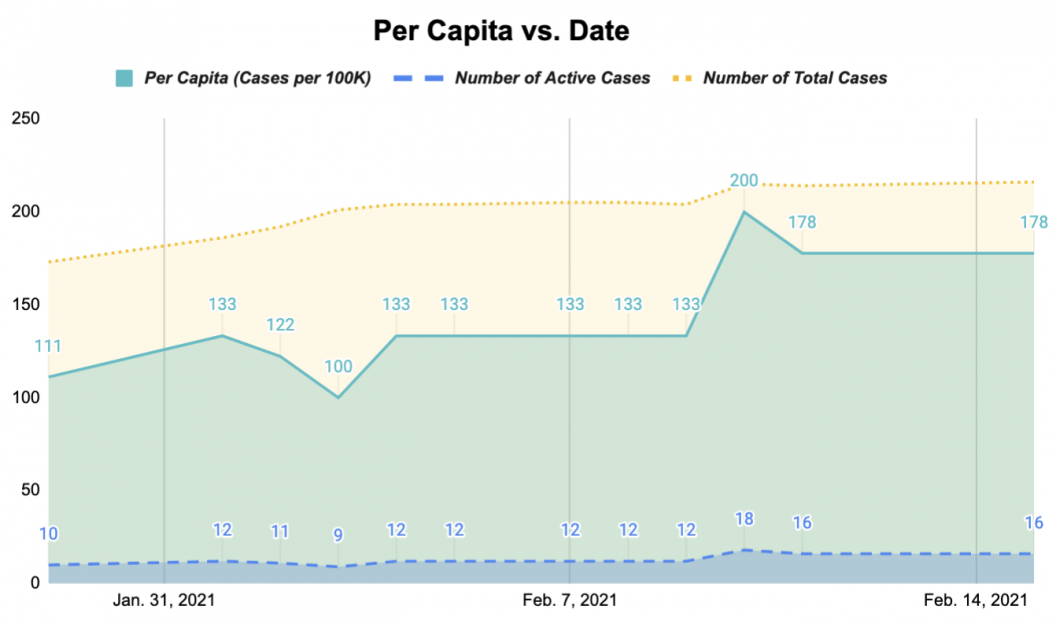 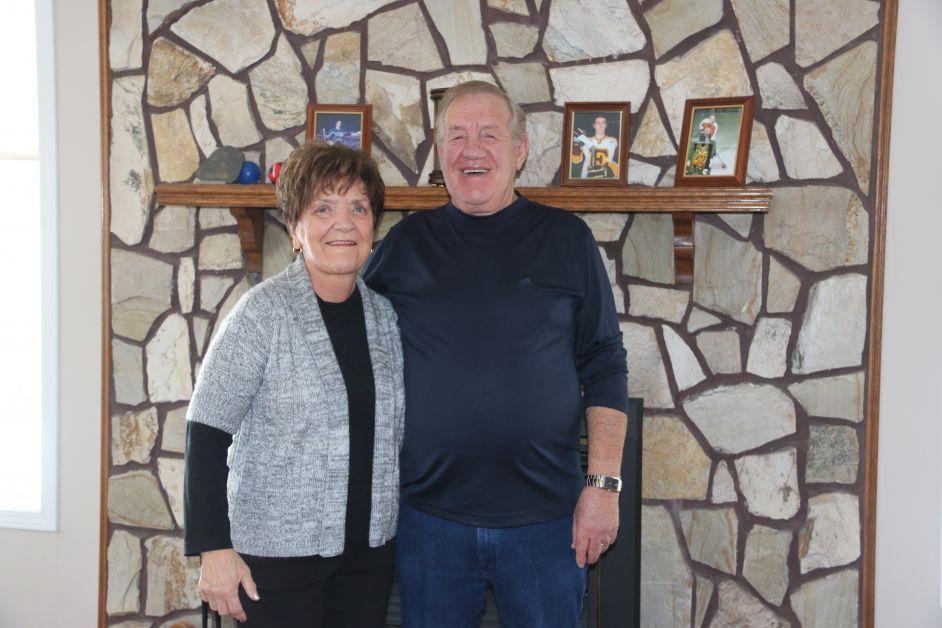 Was it charm? Was it a sense of humour? Was it good looks? When Doug Stanford was asked what he thought the reason was that he caught Carol’s eye more than five decades ago?
“I don’t know, she always liked convertibles, and I always had a convertible,” he laughs. I was driving a 1967 Impala convertible, I bought that pretty new.”
Kidding aside, there was a bit more to the story. Doug was long out of high school and working as an apprentice plumber for Bloxom Plumbing. Carol had moved from the Acadia Valley area to Stettler and then Drumheller and was working for AGT (Telus).
Carol recalls that one of their first meetings was at a laundromat and figures Doug and his friends might have come in because there were a few girls there at the time. She does admit he was a big, handsome brute.
None the less they hit it off.
“Back then, I used to play a lot of fastball, and we would have a lot of parties, so we had a large group of friends, it was a pretty big thing in those days,” he said.
Among their friend group, Doug was one of the last hold outs. While many of his friends were married around 21 or 22, he was about 25. They had a two-year courtship, which included a few nights cruising around in said convertible. They married in 1969.
Doug said it was a tradition in those days to leave for the honeymoon right from the reception, and that’s what they did. They headed out on a road trip through BC and the United States. Travelling was something they have continued to do throughout their married life.
He continued working for a couple of years as a plumber. He then became a steamfitter and began working on building gas plants. This put him out on the road for while. They were able to save up and buy a house and then build a home.
After Carol left AGT, she went back to school and studied to be a hairdresser. She worked at Marg’s Coiffures and then bought the business.
They have two sons, John and Shane, and a daughter, Shannon. They have three grandsons and a three-month-old great granddaughter.
When asked what the secret to a lasting marriage? He said it is having a partnership and trying to find a mutual agreement. 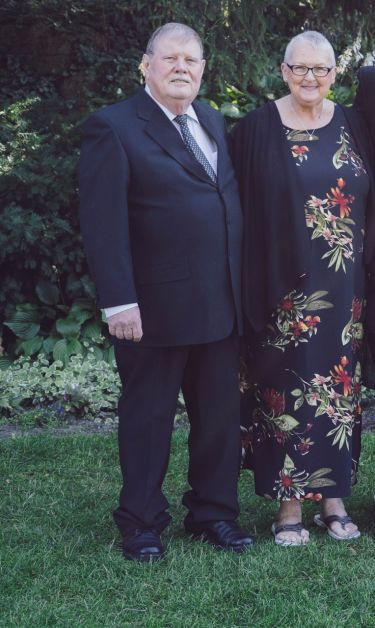 There are few loves that last from high school, but that is the story of Don and Linda Ewing.
Don tells the Mail he was in Grade 12 and the manager of the senior boy’s basketball team. Linda was in Grade 11 on the girl’s team.
“One bus trip, on the way to Strathmore, is when our romance started. We’ve been married over 50 years,” Don tells the Mail.
He said she was really cute and just a nice person and that piqued his interest.
When asked what he thought she saw in him? “It may have been my humour, it couldn’t have been my good looks,” he chuckles.
Being a senior, the next year he began studying engineering at the University of Calgary. He soon decided it wasn’t for him. The distance became even greater, but they kept on.
“By Christmas, I was looking for a job and did get one with Canadian Utilities, and I worked power line construction up north, so that put me even further away,” he said.
The couple was married in the summer of 1969. The wedding was at Knox United Church, and the reception was at the golf course. That fall, Don began the next step of his career, and began studying education in the fall.
“We were again quite separated back then physically but it worked out,” he said.
During his first year of studies, Linda was working for the school division, and Don had received a bursary to study from the school division, with the provision he would return and teach for three years. That’s when he learned where their love began, would also be where his long-time career would be.
At the end of that first year, Linda moved to Calgary and got a job at the School of Nursing.
“It was in the same building as education, so it worked out really fine,” he said.
When he graduated, they made the valley their home. Linda worked at AGT (Telus), Social Services, and is currently working at Anderson Drug located in Freson Bros.
A few years later they started a family with two children; Ryan in Drumheller and Chad in Kitchener, Ontario. They have twin grandchildren, Brody and Duncan, who are now the third generation to study at DVSS.
When asked the secret to 52 years of marriage, come this July 19, Don says, “To me, it is not to stress out over stupid things. If you stay away from that, it will save a whole lot of problems.”