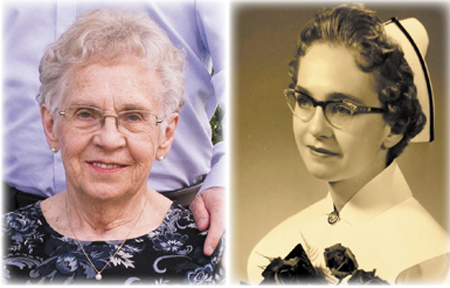 It is with profound sadness we announce the passing of Agnes Victoria Lovsin (Eisler) of Stony Plain, Alberta and formerly of Peace River, Alberta on May 11, 2021.
Agnes was born March 16, 1936 in the small town of Cadomin, Alberta and her affection for this community plus the entire Coal Branch was clear to all who knew her. Cadomin was the place she loved all her life. The mountains, the air, the wind and the people.
As the coal mines closed down in the early 1950s, the Eisler family relocated to Edmonton where Agnes completed high school and quickly thereafter started her nurse’s training at the Misericordia Hospital graduating in 1957. Subsequent to her graduation, she was employed as an RN at the Oliver Institution, as well as at the Royal Alexandra hospital. Her family remembers how sharp she looked in her nurse’s uniform with her white hat when she worked with June Skip at the cancer clinic in Peace River for many, many years. As many of her generation were, Mom was very thrifty and delayed gratification was her norm. One story was how she purchased her nurse's shoes after graduation; $2.00 down and $2.00 per month until the $10.95 required nurse's footwear were fully paid for.
The Coal Branch influence came calling again when our grandparents attended a wedding in Edson, and Agnes attended with them. At that wedding, a young fellow caught her eye and within a year, our folks were married on June 13, 1959. They started building a life together in Hinton followed up with a move to Peace River in 1962, which would be home to them for the following fifty-eight years. In Peace River, Agnes immersed herself in the community and as a busy Mom of four rambunctious kids plus the pals that we brought home for lunch, supper, cinnamon toast and hot chocolate.
We remember our Mom being involved in figure skating as a judge for over ten years and as club President, being the hockey arena food booth co-ordinator for over fifteen years plus being engaged with us in Brownies, Ukrainian dance, track meets, baseball, minor hockey and of course, school. We recall many times a cheer of, “Let’s go Peace River” at our sporting events and it provided us comfort that our biggest fan was there, rooting us and our team on. Mom was our fiercest defender and a shoulder to cry on, when we needed it or when we didn’t need it. We just knew she was always there with us, always.
She was forever busy and working on another project. From the Octoberfest functions with Dr. Dave Willox where she had our Dad stirring the sauerkraut getting supper ready for 900 people, to being a proud member of the CWL for over fifty years, our Mom put her all into helping Peace River, the surrounding communities and her friends. Many of her friends received a piece of her world-famous Christmas fruit cake made with her special, secret recipe. It was, as our Mom said often, “wonderful”. Regular visits to TJ’s restaurant with the Mitchell’s, the Weaver’s and the Siry’s provided our folks with many, many lively discussions and very fond memories.
Gardening and cooking were central to our Mom’s life. Whether it was goulash, strudel, chocolate chip cookies or cross rib roast, she loved that we enjoyed eating and nothing gave her more pleasure than dishing out seconds. The spring, summer and fall were ruled by the flower beds and garden. Watering became a skill only surpassed by weeding and of course, ice tea at the break, listening to CBC on the radio. The best of times in the backyard were spent laughing, playing and enjoying the fire pit. At Christmas for the past many years, Mom became focused on making personalized gingerbread men for her own kids, her grandchildren and other special children in her life. Granny knew exactly how many she had to create and last Christmas, more than sixty of us were lucky enough to receive one.
She was our Dad’s biggest fan and as the old saying goes, “Behind every successful man, is a strong woman. “Often, he has mentioned that he could not have built our company, Freson Bros., without her. She was with him every step of the way and although they are two people, they are one person with similar aspirations, dreams and beliefs. She shared with our Dad the range of emotions of a sixty-five year company that was born, developed and one that continues to change to this day.
Most of all though, she was a proud wife, mother, grandmother and great-grandmother who will be missed every day by her husband of sixty-two years, Frank Lovsin; her four children Mike (Gloria), Paula (Henry), Doug (Deanna), Ken (Maureen); her grandchildren John, Nick (Ally), Kate (Ryan), Markus (Madison), Abby, Paul, Victoria, Eva, Sophie, Maria, Emma, Madeleine, Julia, Sena, Jacob, Michael, Simon and Max as well as great-grandchildren Amelia and Nyla. Our most sincere appreciation goes out to the team at the Cross Cancer facility, Dr. Eric Bedard, our family physician of over fifty years Dr. George Douchet plus of course, Dr. Peter Hum along with Dr. Janet Chiu for their extraordinary consideration, compassion and commitment to our Mom over these past twenty-four months.
Agnes was the proud daughter of new immigrants to Canada and she navigated life with compassion, faith and grace. A poem by R.L Sharpe epitomized her journey as she stepped through her entire, well-lived life.

“Each is given a bag of tools.
A shapeless mass, a book of rules.
And each must make - ere life is flown,
A stumbling block or a stepping stone.”

Due to COVID-19, a celebration of Agnes Lovsin’s life will be held at a later date. 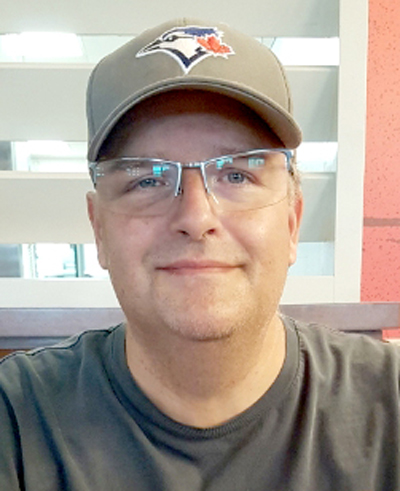 It is with great sorrow and sadness we announce the passing of John Koopmans on May 5, 2021 surrounded by his loving family at the Drumheller Health Centre at the age of 55 years.
John was born November 7, 1965 in Lethbridge to Dirk and Maaike Koopmans. The Koopmans family moved to the Drumheller Valley when John was 14. John made many friends in the Valley, he graduated from DCHS in 1983.
John had many achievements in his life, after completion of high school he attained his pilot’s license becoming an accomplished pilot, he could renovate any room with ease, he also spent time working in the grocery business, he was a well-respected CX1 with Corrections Canada. John married the love of his life Darlene Pearce August 31, 1991. John’s greatest accomplishment of all was his family.
John made sure that his children shared in his love of renovations, mechanic and the knowledge in many other tasks that will serve them well in life. John enjoyed spending time with his family especially his two granddaughters. He will be missed by his loving family and a lifetime of friends.
John will be cherished by his loving wife Darlene, his children; Joanna (Tim), Amanda, Kenny, his granddaughters Chloe, Annabelle, his mom Maaike, his parent’s in-law Ken and Georgina, his siblings Alice (Peter), Stephen (Gwen), Barb (Bob), Greg (Jennifer), Sylvia (James), his
sister-in-law Sharon (Mark), numerous nieces, nephews, cousins, and extended family.
John was predeceased by his baby girl Carrie-Lynn, and his dad Dirk.
Due to Covid, there will not be any formal funeral services. If friends so desire memorial donations may be made to Tom Baker Cancer Clinic or Neuro Oncology Clinic (1331 29th St. N.W., Calgary, Alberta, T2N 4N2).
Courtney-Winter’s Funeral Homes are in care of the funeral arrangements.
“Fleet Canuck John” 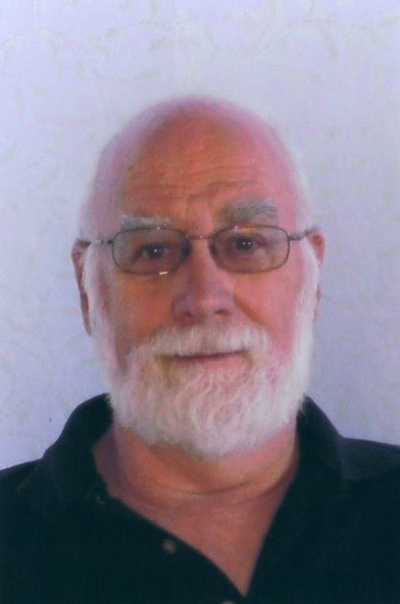 Frederick “Alex” Alexander Clark, 78, of Victoria, BC, passed away peacefully on Tuesday, May 4, 2021 at Saanich Peninsula Long term care.
Alex is survived by his wife, Dorothy of 33 years, together they saw much of the world and shared a lot of adventures. His son Michael and wife Teddi, 3 grandkids, Calvin, Paige and Tiffany and 3 amazing great-grandkids, River, Silas and Grayson, his sisters, Marilyn Hogan (Pat, deceased) and Elaine Johnston (Richard, deceased) and brother Eric Giles (Shawna DeGagne), plus many cousins, nieces, and nephews.
Schoolteacher, sea captain and archaeologist were only a few of the adventures Alex Clark pursued in his lifetime. Born in Kimberley in 1942, Alex spent his younger years hunting, camping and exploring the wilderness with his step-dad. After graduating high school, he enrolled in
Millwrighting at Nelson Millwright Vocational school. That was just the start of his lifelong passion for learning and teaching.
Years passed, more adventures than Indiana Jones, Alex discovers his love of the ocean. In the 1970’s Alex embarks on the start of his sailing career as 1st mate on the Robertson II with the SALTS society. He sailed on the “Robbie” until 1980 when he took an opportunity of a
lifetime to sail on the Danish ship, the Svanen. After several years and voyages to Mexico, Hawaii and the West Coast of North America, Alex dropped anchor and set his sights on teaching.
Being very artistic, charismatic and sociable it was not a surprise he found his calling in teaching Indigenous Arts and storytelling. For the next 35 years he taught thousands of children and their children and even their children. He encouraged many a young talented student to embrace their skills and talent, to succeed and to be confident in their abilities.
Alex, worked with SFU during his summer breaks on the The Tseshaht Archaeological Project. Venturing up the west coast of Vancouver Island to Benson Island. There they would do archeological digs on ancient villages of the coastal people. His love of adventure and cultural sharing was a big part of his life.
Alex stayed teaching up until 2015 when he retired to pursue his hobbies and embark on many more adventures. Sadly a few months after his retirement, Alex would suffer a massive stroke and spend the remaining days in the great care of his new family, the nursing staff of Saanich Peninsula Long term care.
During the many years at Saanich Peninsula Long term care, the dedication of his good friend Carole, helped him settle in to the daily routines of life. Something for which he was forever grateful.
In true Alex fashion he shared a wealth of knowledge and created many strong friendships that continue to this day. He leaves a legacy of happiness and genuine kindness everywhere he has been.
A Celebration of Life will be arranged when the Covid restrictions are lifted and we can all be there to celebrate together.
In lieu of flowers please consider donating to his passion, Indigenous Education and Arts https://ied.sd61.bc.ca/
I love you dad and miss you dearly.