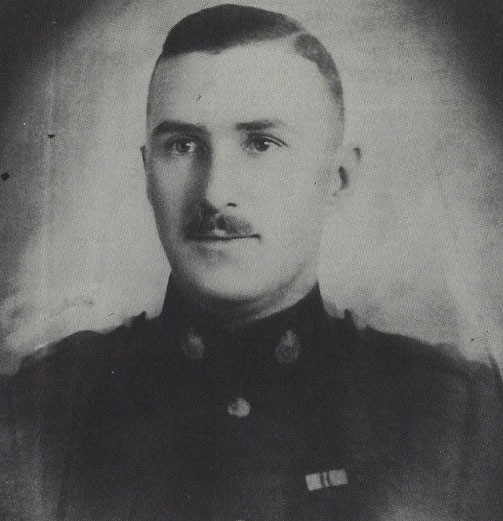 The last Sunday of September is dedicated to the observance of both the Alberta and Canada Police and Peace Officers’ Memorial Day. Flags were at half staff on Sunday, September 27 in honour of those who made the ultimate sacrifice in the line of duty.
This is the story of Drumheller’s fallen officer, Corporal Michael Moriarty.

Michael Moriarty was born in Castlegregory, a small village on the southwestern coast of Ireland.
Prior to immigrating to Canada, Moriarty served with Glasgow City Police in Scotland between 1908 and 1911, and the London Metropolitan Police from 1911 to 1913.
After immigrating to Canada, Moriarty joined the Royal Northwest Mounted Police (RNWMP) in 1914, serving until 1917 when he left to join the Saskatchewan Provincial Police.
He joined the newly-formed Alberta Provincial Police in 1918 until the provincial force was dissolved and became the Royal Canadian Mounted Police in 1932. Moriarty was re-engaged in service in the RCMP as a Mountie.
He served as acting corporal in 1933 and became an official corporal the following year in 1934.
On April 26, 1935 Cpl. Moriarty was killed while attempting to serve a court summons to Rosebud man, David S. Knox.
According to an archived copy of The Drumheller Mail dated May 2, 1935, Knox’s lease had expired when the property, owned by Canadian Pacific Railway, was sold.
On March 25, bailiff David Oliver of Drumheller went to Knox’s residence with a court order of eviction, but Knox pointed a rifle at Oliver and demanded him to get off the property.
Knox made threats to “kill any policeman who set food in his farmyard.”
Cpl. Moriarty and another officer, Constable Roy Allen, went to the residence on April 25, 1935 to serve Knox with a court summons for unlawfully pointing the firearm at the bailiff, but Knox could not be found on the property despite a search of the property.
The summons was nailed to the door of Knox’s residence by Cpl. Moriarty, but Knox failed to appear at court the next day.
Cpl. Moriarty and Cst. Allen returned to the farm on April 26 to serve Knox with another summons.
The farm gate was shut across the road and Cpl. Moriarty stepped out of the vehicle to open the gate and let Cst. Allen through.
As Cpl. Moriarty closed the gate, with his back turned to the house, Knox fired a shot from the window of his home. The bullet hit Cpl. Moriarty in the back of the shoulder, tearing through his chest, dropping the corporal.
Cst. Allen attempted to provide assistance, but Knox continued to shoot as the officer fled the scene.
Cst. Allen was able to make a call for reinforcements from a farm, approximately three-quarters of a mile from the Knox residence. Five RCMP officers, along with a number of armed farmers, arrived as reinforcements.
They followed Knox approximately four miles west where he had taken shelter in a granary. Knox shot at the officers and farmers from a granary window and used a large haystack next to the building as cover.
The ensuing gunfight lasted for two hours.
Archived newspapers from the time of the incident had conflicting reports of how Knox died--some claimed Knox died as a result of being pinned or run over, others claimed Knox was killed by police gunfire.
G.C. Duncan, proprietor and publisher of The Drumheller Mail at the time, commented on the events saying, “The manner in which Mr. Knox met his death was speculative, until evidence placed before the jury at the coroner’s inquest proved almost conclusively that he died from a bullet discharged from his own rifle--whether suicidal or accidental will never be known.”
Knox was laid to rest in Drumheller. Cst. Allen and Cst. Gillespie were in attendance.
A funeral was held at St. Anthony’s church for Cpl. Moriarty where he received full police honours.
Cpl. Moriarty was unmarried at the time of his death, and his only family in North America was a brother in Buffalo, New York. At the request of his brother, the corporal’s body was sent to New York for burial where he received last rites on May 7, 1935 at the Holy Cross cemetery in Lackawanna, New York according to The Calgary Daily Herald.
A road at the training division Depot is named after Cpl. Moriarty and his name is included in the Cenotaph and Book of Remembrance. 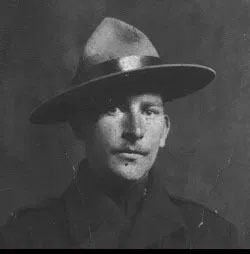 The last Sunday of September is dedicated to the observance of both the Alberta and Canada Police and Peace Officers’ Memorial Day. Flags were at half staff in Drumheller on Sunday, September 27 in honour of those who made the ultimate sacrifice in the line of duty.
This is the story of Drumheller’s first fallen officer, Constable Charles N. Paris.

Charles Nicolay Paris was born in Greenock, Scotland--approximately 41 kilometres west of Glasgow--on September 26, 1892. He was the first-born and only son of Herbert George and Marie (nee Keiding) Paris.
The Paris family immigrated to Canada, settling in the area of Drumheller.
Charles signed up for the Royal North-West Mounted Police (RNWMP) in October 1912 and was stationed as the first police officer in Drumheller. Around this time he wed Beryl Louise Greentree, the daughter of one of Drumheller’s founders, Thomas Patrick “T.P.” Greentree.
According to The Hills of Home, Drumheller history book, a year before joining the RNWMP, Charles saved the life of his younger brother-in-law, Richard Greentree when a fire broke out at the homestead of T.P Greentree. Richard crawled under his bed in fright and would have perished in the fire were it not for Charles’ quick action to pull him out.
Charles left RNWMP at the start of World War I, joining the Canadian Army in July 1916 where he served as Lieutenant of the 187th Central Alberta “Overseas” Battalion.
He was wounded overseas in the war.
Upon returning to Canada, Charles re-joined the RNWMP and purchased a homestead while serving with the Drumheller Detachment. Purchase of the homestead was frowned upon by Paris’ superior officers.
In 1917 Charles and Beryl welcomed a son, Charles Oliver Paris.
Charles left the RNWMP once more in 1921 and joined the Drumheller Police Department where he served for a period of two years.
On the evening of May 2, 1923 Cst. Paris and Police Chief Fletcher attempted to arrest bootlegger, Elmo E. “Ike” Trider. During the arrest attempt, both officers jumped onto the running board of Trider’s McLauglin roadster and Cst. Paris attempted to remove the ignition keys.
Trider attempted to make a getaway, speeding down Railway Avenue in Drumheller towards Parkdale (approximately where the Nazarene Church is located today). Unknown to Trider, the street had been cut off and the vehicle crashed into a board fence at the intersection of Railway Avenue and Sixth Avenue.
Cst. Paris was fatally injured when he was impaled by a piece of fencing and died of his injuries on May 3, 1923.
He was 30 years old and is the first fallen officer in Drumheller’s history.
On his deathbed, Cst. Paris gave an account of the events of that evening. Record of the statement was included in an archived May 10, 1923 edition of the Hanna Herald.
“I, Charles N. Paris, entertaining no hope of recovery from my present illness and conscious that my death is imminent, do solemnly declare that I jumped on the automobile and told Trider to stop. I had a warrant for him. He kept on going and finally he said ‘I am going to run her into the fence,’ and he deliberately ran her (the vehicle) into the fence. That is all I know. He tried to brush us off by the old McKinnon warehouse. I told him to stop three or four times. I saw him behind the Club bar in the alley. Dan Buchanan was in the car with him,” the statement reads.
Following Cst. Paris’ death, Trider was put on trial for his murder. The vehicle’s other occupant, Dan Buchanan, gave an account stating neither Paris or Fletcher interfered with the vehicle’s steering, though Trider claimed otherwise.
Trider was later found not guilty in Cst. Paris’ murder according to a June 2, 1923 archived article from The Lethbridge Daily Herald, though he was sentenced three years on a different charge. The jury was out for a total of 19 minutes.
“This is a lesson that I hope will serve you for the rest of your life, and I hope that nothing will blot from your mind the memory of Constable Paris who died doing what he thought was his duty,” Justice Walsh told Trider according to the article.
Cst. Paris’ name is included in the Memorial Book at the National Police and Peace Officers Memorial in Ottawa. 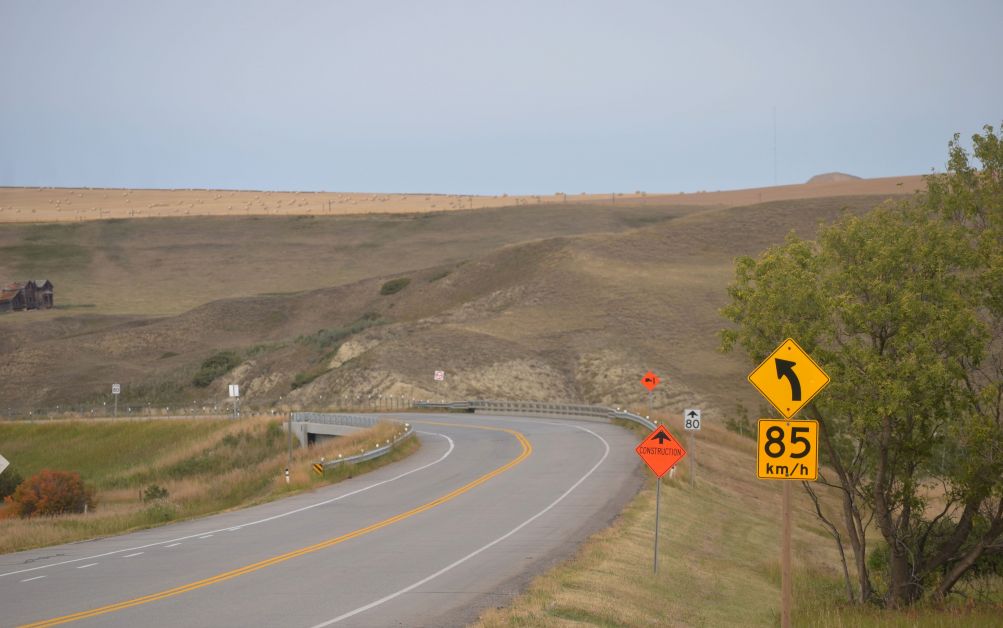 Roadwork is underway to improve and repair roads both in Drumheller and on the roads and highways surrounding the valley.
The work includes replacing Bridge 4 over the Rosebud River south of Wayne, slide repairs along Highway 575, and two projects repairing and repaving sections of Highway 9.
James Klassen, constituency assistant for Drumheller-Stettler MLA Nate Horner, shared information from Alberta Transportation regarding the two Highway 9 projects with the Mail. “Alberta’s government is investing nearly $2 billion in 2020-2021 under the Capital Maintenance and Renewal program to fix bridges, resurface roads, and fill potholes to get thousands of Albertans back to work.”
Locally, repairs were made to a section of Highway 9 that runs from Railway Avenue to 2nd Avenue W. Although the road runs through Drumheller, it is maintained by Alberta Transportation and was part of a number of highway improvement projects province-wide.
Improvements outside of Drumheller municipal limits have also begun.
Repaving to a 20 kilometre section of Highway 9 between Beiseker and Drumheller began on September 3. The project will involve “milling out failing asphalt” and repaving. It is anticipated this project will be completed within 45 days.
Another 15 kilometre stretch of Highway 9, from west of Highway 21 to east of Highway 836 (Carbon corner), will undergo crack sealing and paving. This work has not yet started, though the work “is expected to last 28 days” according to Klassen.
Highway 10X will also see road work to replace Bridge 4, which crosses the Rosebud River approximately three kilometres south of Wayne.
The existing bridge was originally built in 1928 and has reached the end of its service life; to maintain public safety, the bridge will be replaced with a new, two lane steel truss bridge, “similar to the existing structure,” according to a public fact sheet from Alberta Transportation.
The tender to replace Bridge 4 was awarded to Alberco and is estimated to cost $5.1 million. Work is anticipated to begin later in September, and final completion is projected to be summer 2021. Residents and visitors can expect delays and detours starting in October according to the fact sheet.
Street Improvement Program projects within Drumheller, which includes resurfacing of the parking lot at Shopper Drug Mart and repairs to Cedar Crescent, are wrapping up.