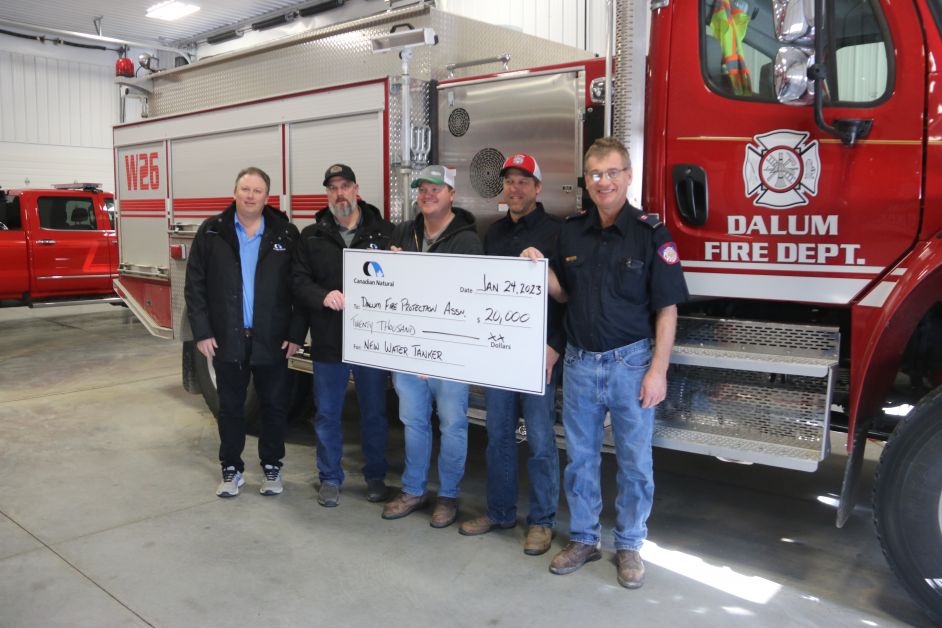 The Dalum Fire Protection Association is actively working on fundraising for a new apparatus crucial to fighting rural and remote fires.
Water to extinguish fires is crucial for a rural department. While the department has tankers, they typically carry 2,000 to 2,500 gallons. In a rural setting where hydrants are nonexistent and natural water supplies are diminishing, when a tender runs out of water, it has to go searching for a source.
Currently, the department is fundraising for a mandated replacement of an aging tender. To replace it they are looking at a modern high-capacity tanker system that will help protect its Fire Protection Area, as well as Wheatland County, and surrounding areas. This will be a tractor unit with a high-capacity tanker.
The tanks will be fully insulated so they are ready to use in any conditions, and will have the ability to carry 12,000 gallons of water to help fight fires.
Fire Chief Albert Jensen says the unit would not be an initial responder but would come on the scene as a supporting unit where tenders would be able to refill and continue the important work of fighting the fire, and potentially saving lives and property. The high-capacity system would only require one operator.
“With this new tender we will be able to allocate more firefighters to fighting fire, than to delivering water,” states a letter from the Dalum Fire Protection Association.
The tender has been ordered and they are anticipating it being in service in the late spring. The truck is a Kenworth coming from the United States and the tanks are being manufactured in Quebec.
The tender comes with a price tag of $875,000 and the Dalum Fire Protection Association is responsible for fundraising for 40 per cent of the cost.
Last week CNRL stepped up to the plate and helped the department with a donation of $20,000 towards the efforts.
The Dalum Fire Protection Association is pounding the pavement for sponsorship and is offering different levels of donor recognition.
For more information, contact Dalum Fire Protection Association president Colin Jensen at
colinejensen@gmail.com.

Rising costs and inflation did not put a damper on development in the Drumheller Valley as the Town saw increases to both the number of development permits and total construction values in 2022.
The number of development permits approved in 2022 increased some 29 per cent, from a total of 85 development permits in 2021 to 110 development permits in 2022.
“We had a steady year for applications,” shares Antonia Knight, Town of Drumheller Development officer.
Among the development permits approved included 24 commercial, 32 sign placements, seven mobile vendors, and two institutional projects.
There were also 41 residential development permits which included one new build and one home relocation, seven manufactured homes, and other permits for decks, garages or sheds, and home additions and home occupations.
June was the busiest month for the development office as there were 19 applications with a total value over $15 million.
The total construction value for the year was $18,811,707.
This is up some 252 per cent over 2021, which saw a total construction value of some $5.3 million.
Ms. Knight shares this increase is partly attributed to rising costs, but is mostly due to some large projects which accounted for much of the approval values. This includes the redevelopment of the 500 wing senior residences at the Sunshine Lodge, the two story SL4 building project at Hillview Lodge which is currently delayed, and approval for development of a new Bottle Depot which is also facing delays.
Along with developments, there were also several demolitions carried out over the last year. However, these fall under building permits rather than development permits and do not impact these totals.
Ms. Knight notes there were a total of 15 building permits issued for demolition in 2022, which included seven houses, the old Co-op Mall, old Drumheller Hospital, Consortium, Nacmine Hotel, and some accessory buildings.
The total demolition value, which does not take into consideration the assessed value of the lost building, was approximately $109,000. 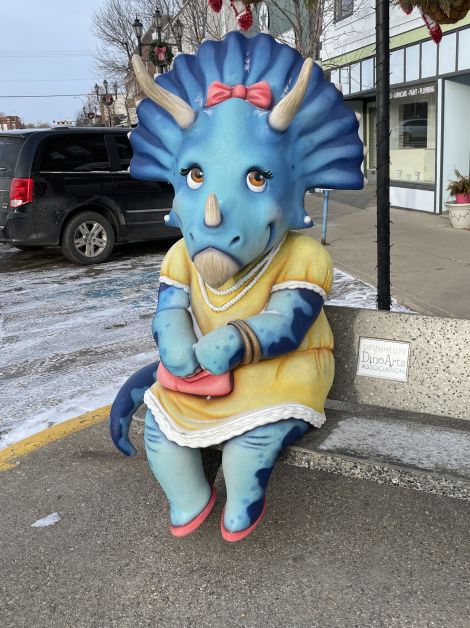 Effie the Dinosaur was up early on a brisk Thursday morning, February 2. She was happy that when she looked down, she did not see her shadow. This means that spring will come early, and along with it, many visitors from all over the world coming to say hi!