Drumheller Dragons fans had cause to cheer this weekend as the Dragons were home for a back-to-back homestand. The Dragons came away with three of four possible points on the weekend.
On Saturday, the Dragons hosted the Lloydminster Bobcats for their first meeting of the season.
The Dragons came roaring out of the gate early. During the first period, the Dragons kept up the offensive pressure and generated a few great scoring opportunities. Hunter Mills gave the Dragons a 1-0 lead 5 minutes in with a snap shot over the blocker of Bobcats goalie Sean Kuehn. 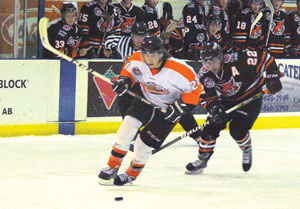 Hunter Mills gave the Dragons an early lead in Saturday’s game against the Lloydminster Bobcats, scoring his fifth goal of the season. The Dragons made some headway in the standings over the weekend, earning three points with an overtime loss to the Bobcats and a win over the Canmore Eagles. The Dragons are now in fourth place of the AJHL southern division.

The Dragons kept the Bobcats’ shots to a minimum in the first, but the Bobcats managed to tie things up with 10 seconds left in the period.
From there, they turned the tables on the Dragons, scoring two quick goals late in the second, and a fourth goal 4 minutes into the third.
The Dragons took advantage of a powerplay following a rumble between Shayne Gwinner of the Dragons and Cole Porter. Christopher Rauckman brought the score to 4-2 at 6:15 into the third.
Rauckman struck again on the powerplay ten minutes later and Dakota Zaharichuk tied the game in the dying minute.
The Dragons were charged heading into overtime, but the Bobcats put the game away a mere 40 seconds in to win it 5-4.
The Dragons had little rest, playing again the following afternoon against the Canmore Eagles.
The Dragons got off to a shaky start, allowing two goals by the Eagles in under five minutes. However, the Dragons soon found their game and turned the tide.
Rory Davidson started the Dragons scoring at 8:08 into the first period. Trent Oulette and Davidson followed up with two more goals in the final minute of the first.
Davidson was on fire and put his third goal of the game away late in the second.
The Eagles took advantage of a tripping penalty by the Dragons a minute into the third to make it 4-3. Mitchell Cook struck back with a powerplay goal for the Dragons a few minutes later.
The Dragons and Eagles battled back and forth for the remainder of the game. The Eagles brought the score to 5-4 with just over a minute left in the game. The Dragons held on for the win.
Tempers flared when the buzzer sounded. The Dragons were slapped with a team penalty and Shayne Gwinner was handed a one game suspension.
The games bring the Dragons to fourth in the AJHL southern division, though tied at 12 points with the Eagles.
The Dragons are at home again tonight at 7 p.m. as they take on the Calgary Canucks. They then head on the road to face the Fort McMurray Oil Barons on Friday and the Bonnyville Pontiacs the following afternoon.

The Drumheller Dragons are turning things around.
On Monday, October 7, the Dragons, reeling from a 5-2 loss at home three nights prior, dished out a decisive 6-2 win over the Calgary Canucks.
The Canucks struck first with a goal 4:45 into the game, but the teams appeared evenly matched until Dallas Smith tied things up for the Dragons ten minutes later. Trent Ouellete would bring the score to 2-1 in the dying minute of the first period on the powerplay.
The Dragons remained on the top for the rest of the game. In the second, Ryan Suchorab increased the Dragons lead to 3-1.
Though the teams remained fairly even on shots, Dragons goalie Curtis Skip ensured the Dragons lead with some key saves. 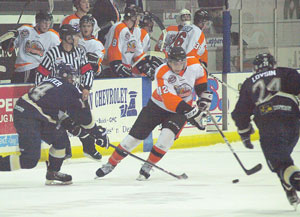 The Drumheller Dragons scored a big 6-2 win on Monday evening on the road versus the Calgary Canucks. Three nights prior, the Dragons were at home, where they lost 5-2 to the Spruce Grove Saints. The Dragons will be at home this weekend for two back-to-back games; on Saturday at 7 p.m. versus the Lloyminster Bobcats and on Sunday at 2 p.m. against the Canmore Eagles.

Suchorab would strike again with a powerplay goal two minutes into the third. Hunter Mills brought the game to 5-1 at 11:12 into the third. The Canucks finally managed to get the puck past Skip to make the game 5-2. The Canucks pulled their goalie in the final minute of the game, but only succeeded in helping Mills get his second goal of the night.
Despite the win, the weekend began with hardship for the Dragons.
On Friday, October 4, the Dragons were at home in front of a crowded Drumheller Memorial Arena for their first game in two weeks, where they took on the Spruce Grove Saints. It was the first time the two teams have seen each other this season.
Dragons heavyweight Cody Fiala attempted to pump up his teammates early on with a huge fight a mere eight seconds after the opening face-off. However, the Saints  gained momentum early, pinning the Dragons in their own zone.
Only seconds after Tyler Poskus took a two minute tripping penalty, the Saints sent the puck flying by Steven Glass for a Saints 1-0 lead. Former Dragon Tristan Reimer then followed up with another goal 20 seconds later to make it 2-0.
The Dragons couldn’t make any headway with their dump-and-chase tactics until Dragons points leader Dallas Smith brought the Dragons back into the game with an unassisted effort at 7:41 into the first.
The Saints retaliated with their third goal of the night a minute later. Glass, who had started in goal for the Dragons, was replaced by Skip.
In the second half of the first, the Dragons were able to break out of their end, play some end-to-end hockey with the Saints, and were better at controlling the puck.
The Saints scored their fourth goal 8 minutes into the second on the powerplay to make it 4-1 after Skip was incurred a delay of game penalty for flicking the puck over the boards.
They would add to their lead early in the third with another goal. Smith, off of Hunter Mills, scored again with just over six minutes left in the game to make the final score 5-2.
The Dragons have suffered through a string of losses early in the season and are currently sitting at a 4-6-1 record and in 5th place of the AJHL Southern Division.
The Dragons will be back at home for a weekend double-bill against the Lloydminster Bobcats and Canmore Eagles. First game starts at 7 p.m. on Saturday, with the second on Sunday at 2 p.m.

The Drumheller Dragons seem to be turning things around, getting a crucial win this weekend after suffering through a six game losing streak.
Over the weekend, the Dragons were in Spruce Grove for the annual AJHL showcase. On Friday, they lost their first game of the showcase 4-3 to the Grande Prairie Storm, but finished the weekend with a 4-2 win over the Sherwood Park Crusaders.

Versus the Storm, the Dragons were on the defensive and fell behind early on. At 8:24 into the first period, Dragons newcomer Lindsay MacLellan was sent away for roughing.  The Storm were able to take the lead 14 seconds later with a powerplay goal past Dragons goalie Curtis Skip.
The Storm followed with a second goal immediately after the next face off, 12 seconds later.
A powerplay goal by the Storm two minutes into the second period gave the Storm a 3-0 lead.
Mitchell Cook gave the Dragons their first goal of the night just under two minutes later. Early in the third, the Dragons tied things up with back-to-back goals by Dakota Zaharichuk and Christopher Rauckman. However, it didn’t last and the Storm scored again under a minute later to make it 4-3. They would hold the lead, despite a flurry of shots by the Dragons.
The Dragons broke their six-game losing streak the next evening against the Crusaders.
The Dragons changed their lineup slightly for the game, putting Steven Glass in net.
The Crusaders made the scoreboard first at 13:27 after Robin Yew was sent to the box for hooking. However, Cook got a powerplay goal of his own soon after to tie the game at 1-1.
The Crusaders would take a tenuous 2-1 lead at 1:26 in the second, but the Dragons Dallas Smith tied the game up again.
The Dragons gained a significant morale boost and the game winning goal at 12:58 into the second with a short handed shot by Hunter Mills.
The Dragons would hold on to a 3-2 lead in the third, despite the Crusaders onslaught of 16 shots on Glass, compared to the Dragons 3 shots in the third. Glass and the Dragons would hold steadfast even when the Crusaders pulled their goalie in the final minute for an extra attacker. Rauchman would put the game out of reach with an empty net goal to make it 4-2.
The Dragons return to home ice on Friday when they host the Spruce Grove Saints.