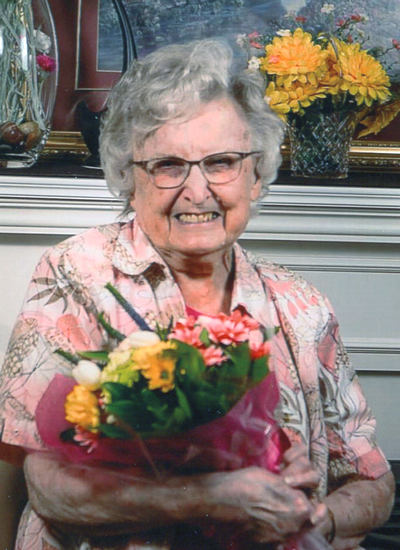 It is with great sadness and broken hearts that we announce that our Matriarch of the Garrett family has passed to be with her Saviour the Lord. Vera Bernice Garrett of Carbon, Alberta beloved wife of the late Robert (Bob) Garrett peacefully passed at the Drumheller Hospital on September 3, 2022 at the age of 92 years young.
Vera Bernice was born April 30, 1930 to Karl and Lena Berreth in Beiseker. Vera was one of five children raised on the family farm between Carbon and Acme. She attended Berean Bible College in Calgary after high school. She lived and worked in Calgary, she was hired on at the Calgary City Hall in Parks and Recreation in the office.
While on a trip to Banff, Alberta with Johnston and Mary Hart, brother and sister, they happened to meet up with Sam, Grace, Bob and Wayne Garrett whom were also mutual friends of the Hart’s. This encounter with Bob was the turning point to a beautiful relationship. They met in 1959 in Banff and married on October 15, 1960. Banff was their go to destination especially around October.
Vera and Bob built their home in Carbon at 309 Bruce Ave. where they resided for over 60 years and raised two boys, Bentley and Clark.
Vera’s love for the Lord was so passionate you could hear it as she played the piano in the Carbon United Church every Sunday. She would play the organ at home and listen to her records and later CD’s of all the gospel music. She loved to sew, crochet, do crossword and puzzles, her and Bob also loved to travel, they went everywhere.
Vera loved her grandchildren and loved it when they would come and have lunch with her and Bob, and she loved it when they had sleep-overs. Her love grew when the great-grandchildren came along, she loved interacting and telling stories and watching them play and to have them around her. Vera loved her family and lived for her children, grandchildren and great-grandchildren. Family was very important to her.
Vera is survived by her son Clark (Kelly) Garrett, son Bentley Garrett, granddaughter, Jessica (Randy) Sharpe, granddaughter Karlee (Byron) Thompson, great-grandchildren: Rachel Sharpe, Kate Sharpe, Wyatt Thompson, Jolene Thompson. Her brother Paul (Valerie) Berreth, and brother-in-law Wayne (Elaine) Garrett, sister-in-law Miriam Berreth, numerous nieces and nephews, and cousins.
Vera was predeceased by her loving husband Robert (Bob) Garrett, her parents Karl and Lena Berreth, brother Leo (Eunice) Ivan Berreth, sister Gladys (Bill) Strohschien, her father-in-law and mother-in-law Samuel and Grace Garrett, brother-in-law Richard Garrett.
Those who knew Vera knew her love for the Lord her Saviour. She was carried away peacefully to be in His loving arms. God be with you all.
A funeral service will be held at the Courtney-Winters Funeral Home in Drumheller, Alberta on Friday,
September 9th, 2022, at 1:00 p.m. A gathering of friends and family to follow at the Carbon Cemetery and a fellowship luncheon at the Carbon Community Hall after.