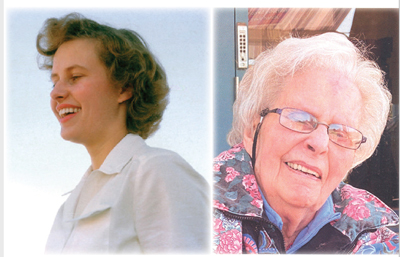 Evelyn Cecilia Christensen (nee Jensen) passed away peacefully at the Drumheller Hospital on August 9, 2020, after a long and interesting life.
Evelyn, a true prairie girl, was born on May 11, 1930 in Standard, Alberta. She was the only child of Ragnhild and Tony Jensen. Even from a young age Evelyn loved to learn, and with her father’s tutorage she leapt directly into grade three at South Valley School. After attending high school in Cluny, with her best friend Muggs by her side she continued her education at the University of Alberta, graduating with a degree in psychology.
It took going all the way to Edmonton for her to meet a hometown boy, Harry Christensen – whose smart appearance and genuine smile she couldn’t resist.
Harry and Evelyn married in 1953. Before long they welcomed their first-born son, Barry, followed shortly by Bob and Leigh, completing the family. Evelyn and Harry had a successful farming career in the Standard area, eventually passing the farm on to their sons.
In 1983, as Harry put it, ‘they finally got a girl’, when Leigh married Yvonne Way, and in 1985 they welcomed their second daughter-in-law when Barry married Jutta Trapp.
Evelyn was an attentive and loving Bedstemoder to her four grandchildren. Her dry sense of humour, generosity, and love of politics - among other things, will be remembered by her family and friends.
Evelyn was always up-to-date on current and political events, even right up to her passing. Over the years, Evelyn travelled to many countries, and learning from her experiences abroad, she would relish in the stories of her grandchildren visiting the same countries years later. She was an avid reader of history and geography, which led her to being a valued volunteer at the Glenbow Museum. Her Danish heritage played a large part in her life, and to this day Evelyn is the reason her family loves all
things Danish. Some of Evelyn’s favourite things were dachshunds, croissants and macadamia nut chocolates - in that order.
Evelyn was a much-loved mother, mother-in-law, grandmother and friend. She will be fondly remembered by her sons and their families: Barry (Jutta), Bob, Leigh (Yvonne), her grandchildren: Fraser, Julie, Andrea and Shawna, and her lifelong friend: Lois Paulson. Thank you Lois for being such a true friend to Evelyn. Also remembering Evelyn are several cousins, brother-and-sister-in-laws, and nieces and nephews. Evelyn was pre-deceased by Harry in 2006.
Many thanks and big hugs to the staff at Homestead, Drumheller Continuing Care! Evelyn’s care at Homestead for the last nine years was exemplary - to her, Homestead was home. Your gentle teasing, kindness and loving care made Evelyn’s last years happy ones. Thank you to the staff at Drumheller Hospital Acute Care, you do your job so well! You made Evelyn’s transition so much easier for her and all of us.
For those who wish, memorial donations may be made to Drumheller Valley Bus Society, Box 2848, Drumheller, Alberta, T0J 0Y0.
A private family service will be held at a later date.
Courtney-Winter's Funeral Home in care of arrangements 403-823-2666.