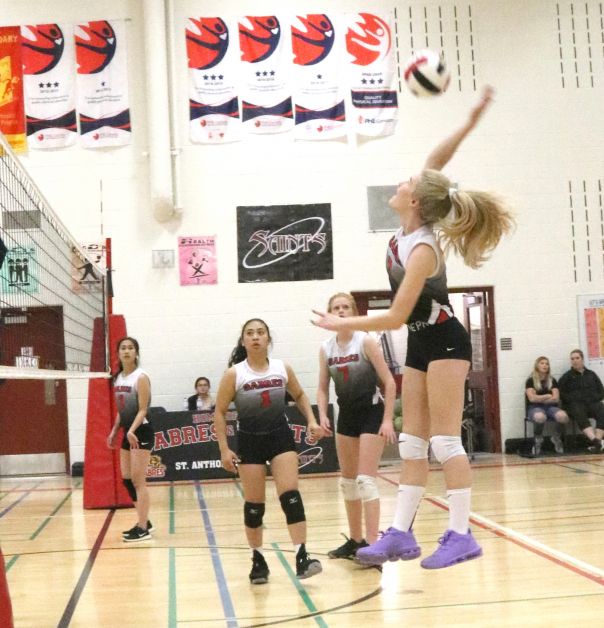 The St. Anthony’s Sabres senior girls volleyball team claimed bronze at their home tournament.
The Sabres hosted a four-team tournament last Friday, October 18 and played well.
The Sabres first faced Beiseker but fell short in both hard-fought games. They bounced back with a good showing against Hugh Sutherland of Carstairs and won two games straight.
“That was probably some of the best volleyball we played all season,” said coach Darcy Bertram. “Hugh Sutherland provided some really good competition so it was really nice to see them win.”
In their third game, they fell to Strathmore. This put them in the bronze medal final, only to face Strathmore once again. This time they were strong from start to finish and won third place.
They battled back to win, so we ended on a high note,” said Bertram.
The Sabres are away this week to play Hanna, and then this coming weekend will be participating in a tournament at Wheatland Crossing. After that, the Sabres will be competing in regionals. 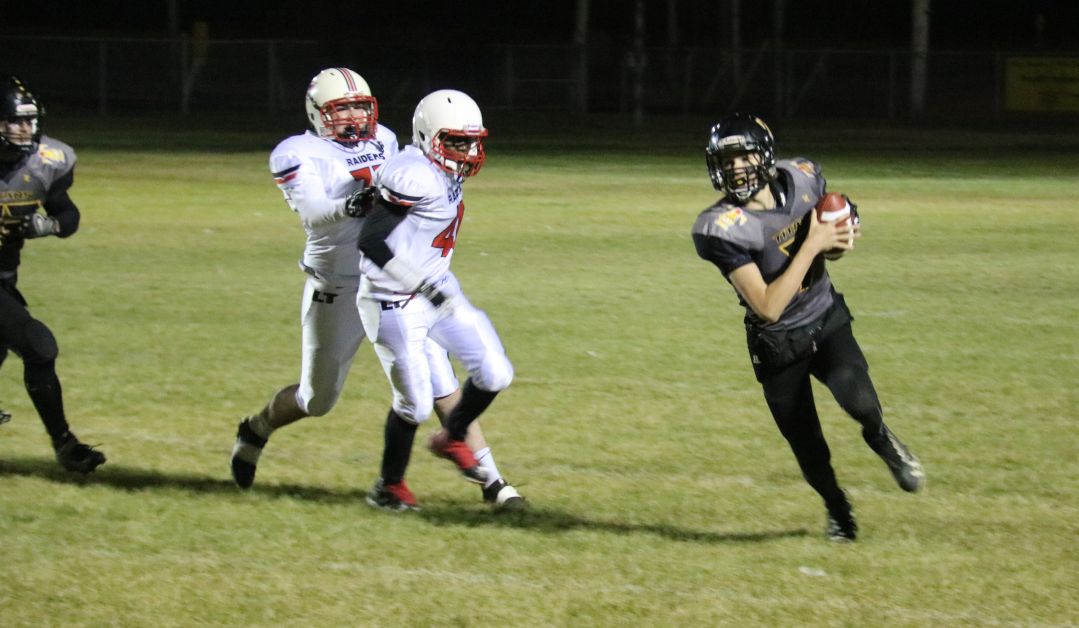 The Senior Titans are now 7-0 and have moved into the third spot in the province after another coming performance last Friday night.
The Titans hosted the Lindsay Thurber Raiders under Friday Night Lights on October 18. Lindsay Thurber plays in a separate league at the tier 1 level. The Titans didn’t know what to expect.
“This was the first time we played them at the senior level. It was a good game. We knew they had a big running back and they throw the ball side to side, so we prepared for that,” said Coach Fournier.
The Titans stood tall and won 25-14.
As always Coach Fournier says it is a work in progress with areas they still need to work on, but “we are heading in the right direction.”
The Titans are now in the final stretch of the season. This week they have a bye, before they face either Olds or Canmore for the league championship.
“Having a bye week at this time of year isn’t really what I’d like. We do have some guys waiting to get back into the line-up with injuries so that will help and get everyone fresh and ready, but at the same time I prefer to be battle-tested,” said Fournier.
He adds they are looking to possibly get a mid-week scrimmage to prepare the team.
This coming weekend Canmore and Olds will be playing off, and coach Fournier expects Canmore will come out of the contest victorious. So far this season, the Titans have topped Canmore in both outings, but both were close games.
“When you play a team that many times in a year it gets frustrating preparing for each other because you kind of know what to expect. The way you play them early in the season isn’t necessarily how you play them later on in the year,” he said. “So we will have a new game plan from the get-go, so next time we play them they will be seeing something different from us.”
If the Titans win the league the provincial regional finals are November 16 and the Alberta Bowl Provincial Finals is on Saturday, November 23. It will be played at Comet Stadium in Raymond. 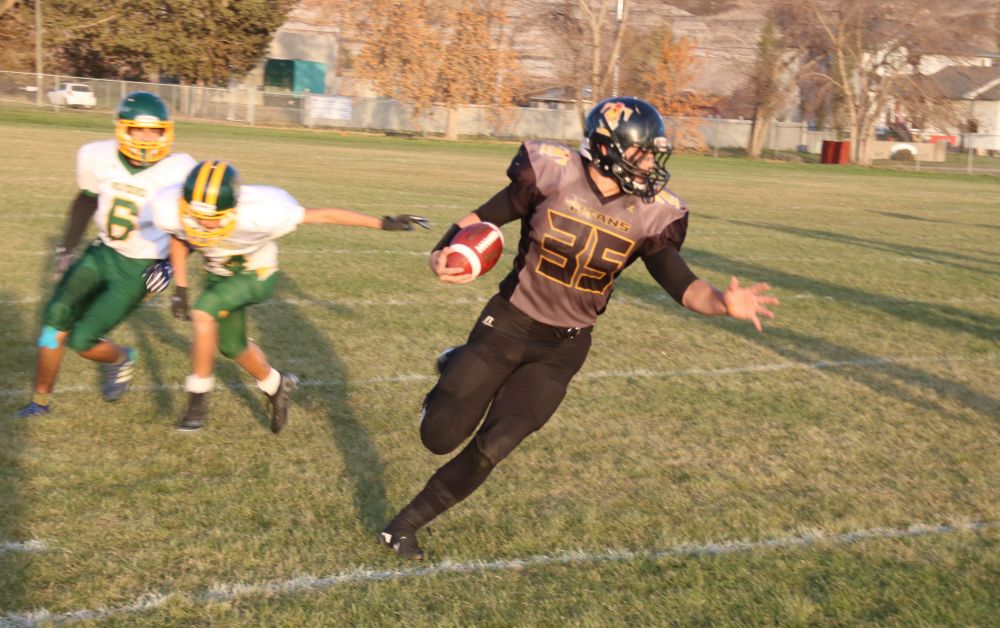 It was a great Thanksgiving weekend for football in Drumheller, as the senior Titans extended their season record to 6-0 at home in a late afternoon game Saturday.

The seniors beat the defending provincial champions Canmore Wolverines in a close 14-6 game on October 12, closing out a day which saw the bantams take the field in the morning and the Terrapins in the early afternoon.

After the game, coach Tyson Powell said it was a tough match for both teams which saw a lot of TItans out with injuries.

“We’ve been coming together as a team real well. Everyone is using the family mentality to bust it out,” says Powell.

“This was a little rougher game for us, but our defence is good and always clicking on the right spots. With the big play capability for us, it’s huge. Canmore is always a good team to come out and play so you got to respect them.”

While the seniors managed to take down the provincial champs, the team isn’t taking the season for granted as they near playoffs in the coming weeks and have their own provincial championship in mind.

“That’s always the goal,” says Powell. “Every year is kinda special, but we got a great group of guys who I think has what it takes.”

With the win, the seniors move up to fourth in the Football Alberta Tier 4 school power rankings. The seniors will be hosting Lindsay Thurber of Red Deer this Friday, October 18 at 7 p.m.