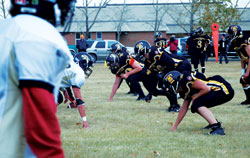 The Senior Titans stormed through the wind and snow to beat arch-rival Hanna, 33-7 in front of Hanna’s home crowd on Friday, October 10. The Titans held strong on the offensive as well as almost unbreakable on defense, despite the freezing weather and snow. The first, second, and third quarters saw three unanswered touchdowns in each quarter. Players were playing exceptionally well this game, they were able to move the ball down the field with ease and even more so, were able to shut down Hanna during the odd time they gained possession. The first three quarters of the game saw wingback/defensiveback Joa Markotic score two touchdowns. Markotic easily outran and outmaneuvered Hanna, with fancy footwork and spins, running it into the zone. Hanna scored their first touchdown with five minutes left in the last quarter, bringing the score to 27-7. The Titans quickly answered with another touchdown three minutes later, this one ran in by wingback Daulton Smith, leaving the scoreboard to a 33-7 point victory for Drumheller. Hanna’s bench only had about five players off at a time and there were rumors about the team was using Grade 9 bantams as fillers. Despite that, the Titans will gladly take the victory against the team that has become the target of hostility for last year’s Titans, and now this year’s. The Senior Titan’s next game is on Saturday, October 18 in Strathmore.

The St. Anthony’s Sabres finished in third place at their first ever-senior girls soccer tournament.
In fact, many questioned whether this was the first ever tournament of its kind in the province.
The Sabres hosted teams from Chestermere, Strathmore, Okotoks and Canmore on Friday, October 3 and Saturday, October 4 in Drumheller.
“I was happy with the results of the tournament, looking at how teams played against each other, because I wasn’t sure how it was going to balance.  But just about every game was competitive and close which is good,” said Makse.
The Sabres first went up against Canmore and claimed their first victory, winning 1-0, with the goal scored by Megan Duncalf. Their next game saw them play Chestermere to a 1-1 tie. The Sabres however won the tiebreak.
Next they played Strathmore. Last week, the two teams met in exhibition play and last time Strathmore was victorious. This time the teams played to a nil-nil tie. Again the Sabres won the tiebreak.
In their final game of the tournament they played Holy Trinity Academy of Okotoks. Again they played to a no-score draw. This time Holy Trinity Academy won in the tiebreak. They also went undefeated in the tournament to win first place overall. Chestermere claimed second.
Makse was very happy with how the team played.
“We never lost a game, and we conceded only one point for the whole tournament,” he said. The whole team improved immensely with every game; their individual play, their team play as well as the technical aspects of the game.”
Goalie Kelsey Christal was the Sabres’ MVP for the tournament.
“She was phenomenal. She made some great saves and some great plays,” said Makse. “In the shootouts she made some amazing saves.”
Organizers hope to make the tournament an annual event, and are grateful to the Drumheller Dairy Queen for sponsoring the plaques and MVP medals. They are also grateful for the referees who officiated on short notice.
The team is hoping to set up a couple of exhibition matches leading up to the zone final on October 24 and 25.

The Senior Titans finally displayed the spirit and determination of last year’s team, and won their first game of the year against Innisfail.
Innisfail was three and zero coming into the valley, and carried a loss on the way out. On Saturday, September 27 the Titans played Innisfail and beat them 21-15.
“The team is finally getting it... we had a defensively outstanding first half, and our offense has seen an obvious improvement,” said head coach, Jason Rasmussen.
The first half of the period showed complete Titan domination of the field. As soon as Innisfail was on offense, Drumheller shut them down and regained possession. The team left two quarters with a lead of 21-1.
“Our offensive line did good, Braydon Mahon wasn’t called on a lot, but did a great job leading huddles and was a catalyst for running plays,” which ultimately led to running touchdowns.
Daulton Smith scored two touchdowns and Joa Markotic ran one into their zone. “Those two did a great job. They saw lines to run in, and read the other team. Darren Smylie stands out and had a phenomenal game, reacting to the backfield of the other team despite having a sore wrist,” Rasmussen said. “He made a lot of great hits, along with the rest of offense.”
There are of course improvements that need to be made, as the team is in a “rebuilding era.” One watching the game could see that the special teams need practice to have a clear view of their job in certain plays. “With a team with so little experience, we haven’t taught them the subtlety of an on side kick,” Rasmussen said.
The Titan’s next, and last home game is on Saturday, October 4, a double header with the Bantam Titans. The Seniors play the Bow Valley Wolverines at 2:00 at the Drumheller Composite High School field.  Rasmussen said, “they are going to give us a run for our money, it will be a very good game.”