The Drumheller Dragons are bound for the second round of playoff action following a 3-0 series sweep over the Canmore Eagles.
On the evening of Thursday, March 7, the Dragons gave the Eagles a 4-0 thrashing. Two nights later, they won a hard fought 4-3 series final in Canmore.
Stephen Doane wasted no time getting the Dragons the lead with a huge breakaway goal 0:35 into the game.
From there, the Dragons kept up the pressure. Mitchell Cook put the Dragons up by two goals 15:56 into the first and Tyler Kerner followed up with the third goal of the night two minutes into the second period.
Afterwards, the momentum would shift back to the Eagles.
“I give them full credit for coming back. Usually when you’re down 3-0 it can be demoralizing. They really showed resilience,” said Brian Curran, head coach and general manager of the Dragons.
At 4:36, Harrison Hendrix was given two minutes for tripping and Baxandall joined him in the box 13 seconds later for cross-checking. The Eagles had another two man advantage.
This time it would pay off for the Eagles. The Dragons fought through a minute of 5 on 3 action, but Nils Moser managed to sneak the puck by Beukeboom for the Eagles first goal of the night.
Trey Phillips gave the Eagles their second goal a few minutes later and Alexander Bechtold tied the game up at 6:11 into the third.
The two teams fought back and forth, but couldn’t get the upper hand. The game would be decided in overtime.
Harrison Hendrix sent a shot at the Eagles net and picking up the rebound was Ryan Bloom who went top shelf on Ty Swabb for the series winning goal.
“We had great opportunities in the last 10 minutes, but Ryan Bloom deserved to win the game. He went to the net hard and got a shot away,” said Curran.
As of press time, the Dragons were awaiting confirmation on who they would play in the second round. Should the Olds Grizzlys prevail against the Okotoks Oilers, the Dragons will face the Camrose Kodiaks. If the Grizzlys lose, the Dragons go up against the Brooks Bandits.
For the games ahead, the Dragons must rein in the penalties.
“We need much more discipline, but a lot of our penalties were for hitting, which happens when you play a physical game,” said Curran. “But, we can’t afford to be down on a 5 on 3 against Brooks or Camorse.” 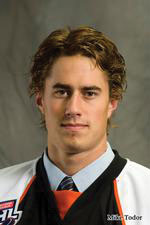 While the Drumheller Dragons have had one of its best seasons in recent memory, they saw one of their players selected to the division all-league team.
Brennan Baxandall was selected to the Reebok South Division All League Team. The announcement of the all league team and the all-rookie team was made on February 26. Baxandall was the lone Dragon to make the cut.
“Brennan has been here for three years and has been through many trials and tribulations and is a very strong defenseman who moves the puck well,” said Dragons head coach Brian Curran.
Baxandall is a 20-year-old defenseman who is in his third full season with the Dragons. He has elevated his game and earned 34 points and 131 PIM so far this season.
“He is a leader on our team, he has lots of character and he’s putting up points this season and is respected throughout the league,” said Curran.
The selections were made by the coaches and managers throughout the league.
Curran says he felt there were a number of Dragons who could have been selected for their strong season. 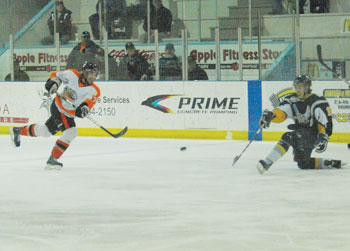 The Drumheller Dragons are tightening their hold on their playoff series versus the Canmore Eagles.
On the evening of Thursday, March 7, the Dragons gave the Eagles a 4-0 thrashing.
Unlike the first game of the series, this game started off in the Dragons favour. At only 1:39 into the game, Cavin Leth, taking a pass from Tyler Kerner, used his speed to beat the Eagles defence, charged at the net, and tucked the puck in the back of the net for a 1-0 Dragons lead.
The Dragons ran into penalty trouble starting at the 14:41 mark into the first period, which continued for most of the second period as well.
Bryton Mills and Brad Deagle were handed tripping and slashing penalties less than a minute apart, which gave the Eagles a two man advantage. The Dragons kept the Eagles at bay.
Twenty-three seconds into the second period, Dakota Zaharichuk was given a game misconduct and a five minute boarding penalty. Just under a minute later, Leth joined him in the box with a cross-checking penalty. The Eagles had another golden opportunity to score on the two man advantage, but couldn’t break through the solid defence and goaltending of the Dragons.
When Leth was released, the Dragons still had to fight through Zaharichuk’s penalties and were still short-handed.
However, the Dragons were dealt another blow when Brennan Baxandall was given two minutes for elbowing at 4:52 and Brad Deagle two minutes for roughing soon after. The Dragons were back to being down two players.
Fans were on the edges of their seats as the Dragons blocked shots left, right, and centre, and Adam Beukeboom held firm in net.
After over seven minutes of penalties, almost five of which were at a two man disadvantage, the Dragons finally were back at full strength.
The Dragons held on to their tenuous 1-0 lead at the end of the second period, but would go on to utterly dominate the third.
Mitchell Gartner put the Dragons up by two on a slick backhand shot at 1:46 into the third. Ryan Bloom went top shelf four minutes later, while the Dragons had a power play of their own, to increase the lead to three.
Throughout the third, the Dragons continued to fight with penalties, but the penalty kill squad kept the Dragons firmly ahead.
Bryton Mills gave the Dragons their fourth goal of the night at 11:05 on the power play
In the end, it was the Dragons penalty killing squad and Beukeboom who won the game. Out of 10 power plays for the Eagles, with roughly seven minutes of two man advantage, the Eagles went scoreless. Beukeboom earned his first playoff shutout of his AJHL career and much deserved star of the game for the Dragons.
The Dragons power play was effective, going two for five during the night.
The Dragons currently lead the best of five series 2-0. One more win by the Dragons would earn them a spot in the second round of playoffs.
The two teams meet again for game three, and perhaps the final game of the series, on Saturday, March 9 at the Canmore Recreation Centre. The game starts at 7 p.m.