The Drumheller Dragons have rekindled their playoff hopes after winning 3-2 in overtime over the Brooks Bandits on Tuesday night.
The game was a do-or-die situation for the Dragons. If they had lost, it would have meant an end to their season.
The Drumheller Memorial Arena was packed once again and the energy in the building was palpable.
In the previous three games, the Bandits had struck first, but in game four the Dragons set the tone of the game early on, keeping the play in the Bandits.
The Dragons would gain a 1-0 lead at 12:09 into the first and while shorthanded. Bryton Mills charged from the Dragons end and stuff the puck in behind Bandits goalie Michael Frederick.
Brodie Jamieson would increase the lead to 2-0 2:24 into the second period. However, two minutes later the Bandits would score one of their own to make the game 2-1.
The Dragons held on to the lead for the remainder of the period, managing to contain the explosive offensive potential of the Bandits. 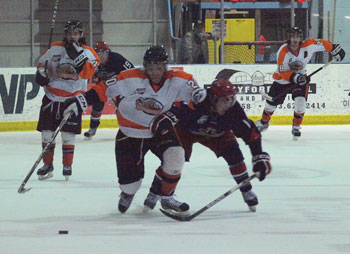 Bryton Mills had a monster game on Tuesday night, scoring the opening and game-winning goals, earning one assist, delivering a series of punishing hits to the Bandits, and earned a much-deserved player of the game.


In the third, the Bandits began to wear down the Dragons and gave Dragons goalie Adam Beukeboom more work than he had seen in the previous two periods.
The Dragons kept the lead until 14:15 into the third when, Shane Pilling, off a face-off in the Dragons end, sent the puck past Beukeboom. The game was tied at 2.
The Bandits, renewed from the goal, continued to pour on the pressure and the final two minutes of the third were played almost exclusively in the Dragons zone.
After a short intermission, the game headed to overtime. The Dragons came out fired up.
Their hard work paid off at 4:25 into overtime, when Bryton Mills sent a blistering shot through traffic to the back of the Bandits net.
The stands erupted with cheers as the Dragons kept their playoff drive alive.
The fifth game of the series will be held in Brooks on Thursday night.

The Drumheller Dragons were victims of a brutal mugging at the hands of the Brooks Bandits in the second round of the AJHL playoffs.
In the first three games of the series, the Bandits skated away with commanding victories. The second round started On Friday, March 15, in Brooks, where the Bandits took a 5-1 win over the Dragons.
The Bandits set the tone for the game early, scoring their first goal of the night 15 seconds into the game and followed up with three more goals throughout the remainder of the first period and the second.
The Dragons fought hard and generated quite a few chances, but couldn’t penetrate the solid goal tending of Michael Frederick until Ryan Bloom found an open seam and scored the Dragons only goal of the night while shorthanded at 10:56 into the third.
The Bandits capped the game with their fifth goal with three minutes left.
The Dragons and Bandits remained in Brooks for game two the following night.
The game started off fairly even between the two teams, but the Dragons ran into trouble 10 minutes in when RJ Reed opened the scoring for the Bandits. Within two minutes, the Bandits followed up with two more goals to make the game 3-0 heading into the first intermission.
Things continued to spiral out of control for the Dragons and their stalwart goalie, Adam Beukeboom was pulled. Etienne Roy filled in, but couldn’t hold the Bandits back either, giving up three goals in the first five minutes of the second period. Beukeboom then returned to net after taking some time to regroup.
Mitchell Gartner scored soon after while on the powerplay, signaling the Dragons were not done yet. The Dragons fought back and Mtichell Cook gave the Dragons their second of the night at 17:31 into the second.
The Dragons were playing with new life and in the first three minutes of the third period, Colton Vannucci and Duncan Pernai racked up three more goals for the Dragons.
The Bandits, reeling from the onslaught, pulled Frederick and were on their heels for the remainder of the period. The Dragons couldn’t get the sixth goal they needed to tie things up. In the final minute they pulled Beukeboom, but the Bandits managed to seal the win with an empty net goal to make it 7-5.
Game three was brought to a packed Drumheller Memorial Arena on Monday, March 18.


The Dragons began the game all fired up and took it to the Bandits, outplaying and shooting them in the first. However, it was the Bandits who struck first on the scoreboard at 10:40 while on the powerplay. The two teams headed to the first intermission with the Bandits up 1-0.
The game got away from the Dragons in the second. A string of penalties would see the Dragons short-handed for most of the period. The Bandits capitalized, scoring three more goals for a 4-0 game heading into the third.
The Dragons, their frustration showing, took it to the Bandits hard in the third, getting a number of punishing hits.
The Bandits kept up the pressure, and snuck the puck by Beukeboom eight minutes in for their fifth goal.
The Dragons would score one for pride 11:21 into the third while on the powerplay. Hunter Mills, his first of the playoffs, found a loose puck in front of the Bandits net and sent it by an out of position Frederick.
The Bandits would skate away with a 5-1 win and a 3-0 stranglehold on the series.
The two teams met for game four tonight at the Drumheller Memorial Arena. The game starts at 7:30 p.m. 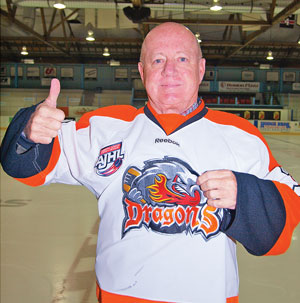 The Drumheller Dragons’ foe for the second round of the AJHL playoffs was made official on Tuesday night when the Okotoks Oilers beat the Olds Grizzlys in game five of their series.
The Oilers victory means they will take on the Camrose Kodiaks and the Dragons will face the number one Junior A team in Canada; the Brooks Bandits.
The Dragons head to Brooks tonight for game one and stay overnight for game two. Game three will be held Monday, March 18, at the Drumheller Memorial Arena at 7:30 p.m.
The Dragons have a tough series ahead of them. In six meetings between the two teams in the regular season, the Bandits won all six. The Bandits went 53-4-3 on the season, earning 289 goals with only 113 against. They handily took first place in the AJHL southern division and had a break for the first round of playoffs.
To be successful against the Bandits, the Dragons will have to control the number of penalties they receive. The Dragons’ first round victory against the Eagles was aided by some remarkable penalty killing, especially in several 5 on 3 situations.
However, the Dragons can’t afford to give the Bandits those chances.
To give the Dragons some added incentive to win, Mayor Terry Yemen and Brooks Mayor Martin Shields have agreed to a jersey swap should their respective team lose.
“The gauntlet has been thrown down.  Mayor Shields has agreed to wear a Dragons Jersey and make a declaration that Drumheller is the best town in Alberta when the Drumheller Dragons defeat the Brooks Bandits in this next round of the playoffs.  If, by chance, Brooks were to win, I will be required to do the same,” said Mayor Yemen.