The Drumheller Dragons racked up two more wins over the past week, retaining their hold on in the top three of the AJHL Southern Division.
On October 24, the Dragons travelled to Camrose to take on the Kodiaks. It was a close game, but in the end the Dragons came away with a 3-2 shootout victory. 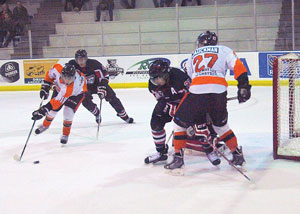 The Dragons remain in the top three of the AJHL Southern Division after two wins over the Camrose Kodiaks on Thursday, October 24, and Sunday, October 27. The Dragons were in Hanna on Saturday, hosting the Calgary Mustangs, but were defeated 5-0. The Dragons head on the road this weekend to Whitecourt, Grande Prairie, and Spruce Grove.

The Dragons had the offensive edge in the first period, out-shooting the Kodiaks and getting the first goal of the game.
The Kodiaks came out strong in the second and pushed the Dragons back on their heels. The Kodiaks tied things up early in the second and then took a 2-1 lead late in the period after Ryan Suchorab was sent to the penalty box for cross-checking.
The Dragons bounced back in the third. Trent Oullette tied the game up five minutes in. From there, the teams were locked in a stalemate and the game went to overtime.
After a scoreless overtime period, the game was decided in a shootout. Adam Beukeboom denied the Kodiaks and Dallas Smith scored for the Dragons for the win.
On Saturday, October 26, the Dragons hosted the Calgary Mustangs in Hanna. The Mustangs trampled the Dragons 5-0.
The Dragons had some quality chances, but couldn’t get the puck by Mustangs goalie Ravi Dattani.
The Dragons looked to redeem themselves the following afternoon in Drumheller. Despite the snow, Dragons fans came out to the game and were not disappointed. The Dragons, unbowed by the previous evening’s defeat, delivered a huge 5-2 win over the Kodiaks.
The Dragons started off the first playing mostly in their own end, but battled hard to take control of the period. At 11:41, Hunter Mills gave the Dragons a 1-0 lead. A minute later, Regan Yew swooped in with a backhand shot to make it 2-0. Mills would get his second goal of the afternoon unassisted with just over two minutes left.
The Kodiaks fought back in the second period, outshooting the Dragons, but Beukeboom remained solid in net. The Kodiaks kept up the pressure in the third, but a roughing penalty  proved costly when Trent Oullette scored the Dragons’ fourth goal.
Then, the Dragons suffered a defensive breakdown halfway through the period, allowing the Kodiaks to score twice in under a minute.
The Dragons regained their composure and Christopher Rauckman scored the Dragons’ fifth goal to make the final score 5-2.
The Dragons are on the road this weekend, with three games back-to-back. On Friday, they head to Whitecourt to face the Wolverines. On Saturday they are in Grande Praire. Their trip concludes in Spruce Grove against the Saints on Sunday.
The Dragons return to home ice on November 9.