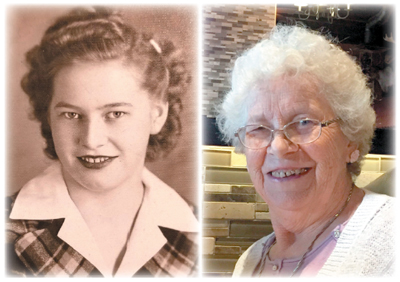 Mrs. Clara Poulsen wife of the late Benth Poulsen passed away after a lengthy illness on November 9, 2021 at the age of 93 years.
Clara (Gran) was born in Drumheller on June 30, 1928. She was the 3rd child born to Marius and Esther Jorgensen. She attended Blue Spring School, as well as Olds College.
Clara married Benth Poulsen on March 29, 1950. Their home “Crystal Springs” was situated in the Wintering Hills. They farmed as a team for 57 years. She was adept at operating the combine or hauling grain, sometimes with children in tow. In both Spring and Fall Clara brought hot meals to the field, served on a table with chairs… and sometimes a tablecloth. Whether it was sewing or helping in the field she was a dedicated farm wife.
Clara believed in family, and community. She was a member of the Junior UFA…Dalum Friendship Club…4H Leader for the Sewing Club…Church Council…Dalum History Book Committee, to name a few. Many hours were spent volunteering in various community groups.
Clara was a busy lady, never a dull moment. She excelled at all handiwork. It was unusual to see her with empty hands. She is remembered for her caring personality and consistent happy attitude. Clara and Benth retired to their house in Drumheller in the summer of 2008. Followed by a brief stay at the Sunshine Lodge and then moving to a beautiful care home in Red Deer. After Benth’s passing in 2016, she moved to Meadowlark Care Home in Strathmore where she had wonderful care.
Clara leaves to cherish her memory, one daughter Kathy (David), one son Harvey (Della), her grandchildren, Kyle (Erin), Leigh (Jessy), Megan (Jeremy), Gavin (Raquel), Troy (Amy), Dayl (TeddieAnn), great-grandchildren, Wyatt, Ryann, Lane, Soren, Roslyn, Scotty, Rio, Levi, and numerous extended family members.
Clara was predeceased by her husband Benth, her parents Marius & Esther Jorgensen, siblings Erna (Hans) Boe, Margaret Jorgensen, Arnold (Lorraine) Jorgensen, Lois Jorgensen and adopted son Chuck.
A Service of Remembrance will be held on Wednesday, November 17, 2021 at 2:00 P.M. at the Bethlehem Lutheran Church, Dalum, Alberta with Pastor Dan Hendrickson officiating, interment will follow in the Bethlehem Lutheran Church Cemetery. If friends so desire memorial donations may be made in Loving Memory of Clara to the Bethlehem Lutheran Church, Dalum, Alberta.
Courtney-Winter’s Funeral Homes are in care of the arrangements. 403-823-2666 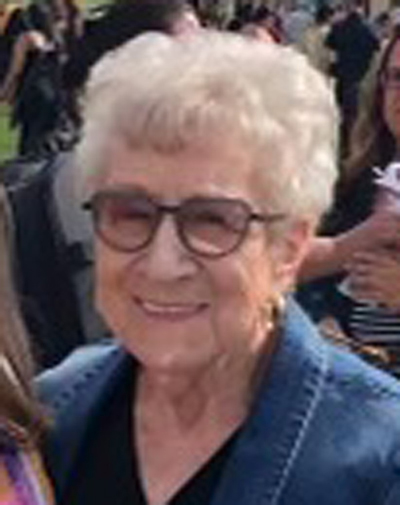 It is with great sadness that we announce the passing of Lillian Anderson after a brief battle with cancer. Lil will always be remembered by her sons Kenneth (Bonita), Joseph (Debra) and Frank (Theresa); cherished grand children Kelly (Tom) Lesko, Cameron (Brittany) Anderson, Julie (Ryan) Mehler, Curtis Anderson, Caitlin Anderson, Michelle Schill; and her sister Carol (Larry) Kohsel. Lil was blessed with nine great-grandchildren: Emilia, Harper, Felix, Charlotte, Kasper, Brooks, Hadley, Ryder and Kohen. Lil was pre-deceased by her loving husband of 59 years, Floyd and infant daughter Roseanne.
Lillian was born in Bassano, Alberta February 14, 1930 and married Floyd in 1951. Together, Lil and Floyd raised their family on the farm at Rumsey. Life was very busy with three boys yet Lil and Floyd always found time to volunteer and contribute generously to the community.
They retired from the farm in 2000 and moved to Drumheller, reuniting with old friends and making new “condo” friends. Family, friends and hosting a good meal defined Lil and her grandchildren and great-grandchildren were a huge part of her life bringing her much joy.
Thank you to Dr. Olfert and Dr. Mateer and the kind and compassionate nursing staff at the Drumheller Health Centre who made Lil’s final days so comfortable.
In lieu of flowers, donations can be made to the Drumheller Area Health Foundation or a charity of your choice.
Funeral Mass by invitation. 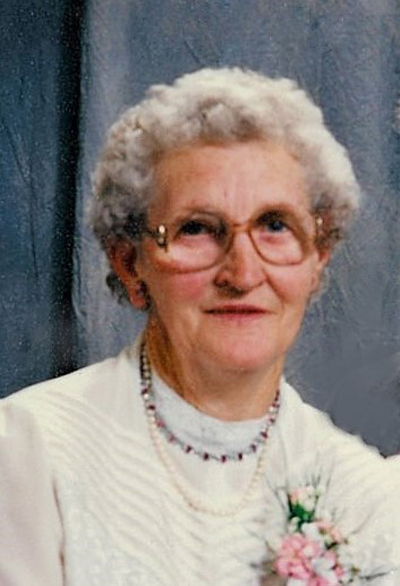 Freda Brewitt passed away November 8, 2021, at the Hanna Long Term Care Centre at the age of 92. She was born to Henry and Lucille Birkhiem on the family farm north of Michichi. She grew up there with her two brothers Walter and Jack. They attended school at Lloyd George until it closed and then went to Starland.
Mom started grade 10 in Drumheller and stayed at the dorm until Christmas. Being the country mouse, she never seemed to fit in with the city girls and absolutely
hated her time there. While home for Christmas she begged not to be sent back and shortly after went to work at the McCallister ranch at Big Valley. She loved working there and they became a second family to her especially after her mother died when she was seventeen.
In 1951 she married Ken Brewitt and moved to the family farm. She became a partner in all aspects of the farming operation; a true mixed farm. No job was too menial or hard to tackle. They became affectionately known as the egg lady or man to their many customers to whom they made weekly produce deliveries. At one time, they supplied eggs to three of the grocery stores in Drumheller and also to the hospital. Many of their customers became lifelong friends.
Mom loved to garden and spent many blissful hours in it. She really hated being indoors in the summer. Her love of growing things made a progression to showing them and she entered many of the local fairs. From here, she again progressed into judging after taking the necessary courses at Olds college to certify herself. For many years, she judged at various fairs all over Alberta. She enjoyed the travel and the people she met.
She was a lifetime member of the Sunbeam Ladies Society and had many friends there. They as a group kept our community together and entertained for many years.
Mom loved to cook and there were always cakes or cookies around and whoever showed up usually got coffee and a sampling.
Whatever dog we happened to have at the time became the center of the universe. A fridge magnet she had summed it all up - “this house is owned and operated solely for the comfort and convenience of the dog.”
Mom and dad were married 57 years. After he died in 2008, she remained on the farm until dementia began to take its toll and when she lost her driver’s license, she moved into Sunshine Lodge, then to Hillview and finally to Hanna Long Term Care. She rejoined Dad two days before what would have been their 70th anniversary.
She is survived by her son Donald and wife Diana, and grand dog Cocoa (Mom would love that part), nieces, nephews, and lifelong neighbors.
A graveside service was held on November 15, 2021, at the Delia Cemetery.
In lieu of flowers memorial contributions can be made to a charity of your choice.
Hanna Funeral Services Ltd. has been entrusted with the care and arrangements; 403-854-5956, www.hannafuneral.ca