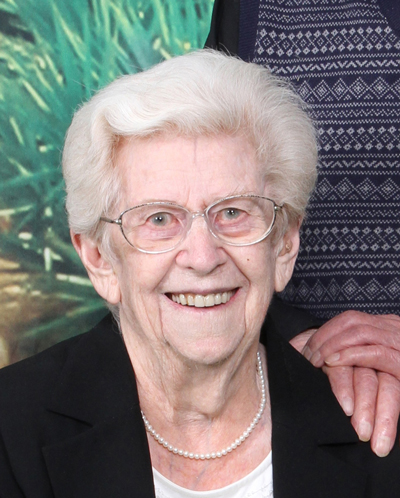 Robina Peterson, resident of Grande Prairie, AB, passed away on Saturday, February 27, 2021, at Prairie Lakes
Hospice in Grande Prairie, AB, at the age of 94 years.
Robina was born to Edward and Susan Hewitt in Michel, BC, on January 17, 1927. She had one sister Edith (deceased) and two brothers Doug (Esther deceased) of Fort Macleod, AB, and Bob (Marg) of Cowley, AB.
At approximately three years of age, Robina moved with the family to a homestead north of Cowley, which is where she grew up. Robina took grades one to nine in a one-room school called Olin Creek. She then finished her High School in Pincher Creek, AB, followed by teacher training in Calgary Normal School in 1944. Her first school was a one-room country school in Bawlf, AB, where she taught for six months. She moved to Hesketh and taught there for two years. This is where she met Jack and they were married in 1947. Robina and Jack were married for 73 years. Jack predeceased her by four days. They could not stay apart. She returned to teaching in Hesketh and Carbon, AB, before retiring in 1982. In 2013, they moved to Grande Prairie to be closer to family.
Robina is survived by her children: John, Harvey (Pat), Janet (Ken) Stevenson, Randy (Norma); grandchildren: Tammy, Carol, Jason, Terry, Luke, Ben, Chris and Jamie.
A Viewing will be held on Thursday, March 4, 2021, at 12:00 pm with the Service to follow at 1:00 pm at Oliver’s Funeral Home in Grande Prairie (10005 107 Ave.). The Interment will be held following the service at Carbon Cemetery.
Memorial donations may be made to the Grande Spirit Foundation - Wild Rose Manor (9505 102 Ave., Grande
Prairie, AB, T8V 7G9).
Condolences may be sent by visiting www.oliversfuneralhome.com