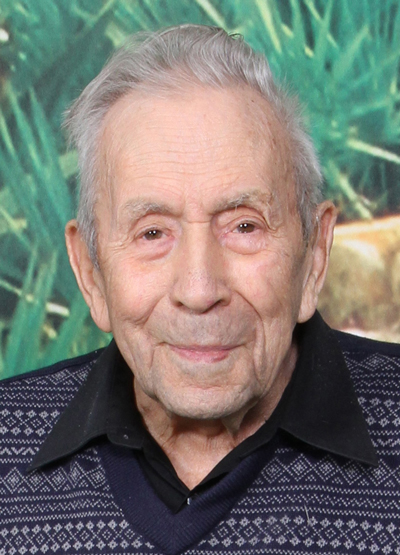 Reinhold “Jack” John Peterson, resident of Grande Prairie, AB, passed away on Tuesday, February 23, 2021, at the QEII Hospital in Grande Prairie, AB, at the age of 98 years.
Jack Peterson was born in Drumheller, AB, in 1922, to Jane Peterson (nee Cox) and Ernie Peterson. He was brought home to his father’s log house situated on the homestead he took out in 1905, when the Northwest Territories became Alberta. Alberta was one of the provinces that came into being at that time. In 1923, the family moved down to Hesketh, AB, where Ernie had a story and a half frame house built.
In 1927, Ernie moved his family down the Kneehill Creek to a house he built. It was from here that Jack started school, walking to the school in Hesketh. Jack claims it was uphill both ways and three feet of snow both winter and summer. The first school was in a room built on the north end of the hall. By the next year Hesketh School was built. It was in this room school Jack completed his schooling, graduating from high school. In 1933, Ernie had moved his family back to Hesketh. When Jack completed high school, he worked for farmers until 1945, when he took over his dad’s farm.
In 1947, he married Robina Hewitt from North Fork, AB. They had four children: John, Harvey (Pat), Janet (Ken)
Stevenson, and Randy (Norma). Followed by numerous grandchildren and great-grandchildren.
In 1952, Robina and Jack became members of the Fellowship Baptist Church in Drumheller where they both filled many positions in the church, and have treasured the many friends they gained in the Drumheller church and sister churches. In Hesketh, Robina and Jack were involved in the community. Jack played on the Hesketh baseball team, and was leader of the Hesketh – Orkney 4-H beef club for a number of years. He was also Secretary Treasurer of the Hesketh Community Hall Association for a few years and the unofficial Mayor.
Robina and Jack travelled extensively, visiting family and friends. Jack accumulated numerous history books on his travels.
In the fall of 2004, Robina and Jack moved to Manor 1 in Drumheller. In 2013, they moved to Grande Prairie to be closer to family.
Jack is survived by his loving wife of 73 years Robina Peterson; sons: John, Harvey (Pat), Randy (Norma); daughter Janet (Ken) Stevenson; eight grandchildren, twenty-two great-grandchildren, and two great-great-grandchildren.
P.S. “This story is only guide, a short history of my life.” written by Jack.
Memorial donations may be made to the Grande Spirit Foundation - Wild Rose Manor (9505 102 Ave., Grande
Prairie, AB, T8V 7G9).
Condolences may be sent by visiting www.oliversfuneralhome.com