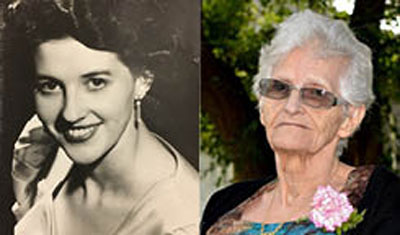 In loving memory of Margaret Evelyn Hourie (Woods) known by all as Evelyn. Evelyn passed away peacefully at the age of 88 at the Continuing Care in Drumheller on February 9, 2019 after a lengthy, courageous battle with Dementia. Born August 21, 1930 in Melfort, Saskatchewan to Robert and Lillian Woods she was one of 12 children. After finishing grade 11 she moved to Kamloops, B.C. where she worked as a nurse in the Tuberculosis Sanitarium. In 1952 she married Roy Hourie, they moved to Drumheller, Alberta where they bought a house in Nacmine and raised their 4 children. She leaves behind many dear and lifelong friends, along with her family: Charlotte, Barry (Linda), Debra (Maurice), Martha, her grandchildren and great-grandchildren. She was known as Grandma to many who loved her and for her caring nature. Later on in life she was happily reunited with a son she had adopted out in 1952, Ed Jeeves... she was blessed with more grandchildren and great-grandchildren. She was predeceased by her parents Lillian and Robert, husband Roy of 36 years in 1989, her eldest daughter Charlotte in 2003, her eldest son Ed in 2008, her brothers Johnny, Jimmy and Charlie and sisters Ruby, Mary and Edna. Her love of music is how she met her husband - she always said she couldn’t carry a tune in a bucket but that didn’t stop her from singing. She enjoyed helping people and animals, volunteering, babysitting, baking, knitting, crocheting, playing bingo and the list goes on and on. There wasn’t much she wasn’t good at doing, and she was quick to teach anyone who was willing to learn. There will be a memorial service for Evelyn on Friday, February 15, 2019 at 1:00 p.m. at the Salvation Army Church, 90 South Railway Avenue West, Drumheller. Following the service, there will be a graveside interment at the Drumheller Cemetery. Join us at the Nacmine Community Hall where we will then be remembering Evelyn the way she would have wanted—surrounded by family and friends, with snacks and refreshments. The family would like to extend a special thank you to all the healthcare professionals who have cared and taken such good care of Evelyn all these years both at the Sunshine Lodge and at the Continuing Care. Thank you as well to all who have visited and supported her throughout the years. In lieu of flowers donations can be made to the Salvation Army Church, P.O. Box 3097, Drumheller, AB T0J 0Y0 in Evelyn’s memory. Finally, we want to give thanks to the Lord and Savior, Jesus Christ.
And the dust returns to the earth as it was, and the spirit returns to God who gave it. Ecclesiastes 12:7 ESV