Condolences to the family of Bert Johnson | DrumhellerMail
09192020Sat 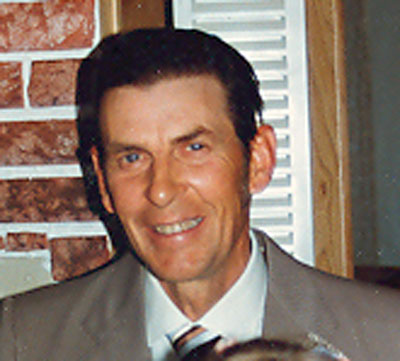 Bert Johnson of Rumsey passed away on September 11, 2018 at the age of 80 years. Bert was born on April 17, 1938 to Johnny and Mary Johnson of Rumsey. He was the “middle child”- #6 of 11 children. He was raised on the Johnson family farm, northeast of Rumsey, and attended Greenridge School in his younger years, and finished his Grade 11 in Drumheller, where he lived in the dormitory. Bert married Elaine Cameron in 1960. They had two children Duane and Gwen. During his life, Bert farmed with his brothers, Melvin & Ed at Rumsey, operated the Modern Machine Shop Allis Chalmer/Dodge dealership in Stettler with his oldest brother Clarence, had a livestock hauling business, operated the UFA fuel bulk station in Rumsey, and operated the Rumsey Hotel for a short time. But his true love was his purebred Simmental herd. He raised and showed cattle across Alberta for a number of years, and had many Champions, of which he was very proud. Bert was an avid 4-Her. He was a member of the Scollard Beef Club in 1948 & 1949. He was a 4-H leader for over 10 years, attended the 4-H Show every year until failing health made it too difficult. Even then, he would need a detailed update every year as to the winners and sale results. Bert loved to party! He enjoyed curling, dancing, coffee at the Rumsey Drop In, and always loved a great card game. Smear was his game of choice. Sadly, Bert suffered a stroke in 2007. From that time forward he lived in various lodges, with his final move being to Drumheller Continuing care, where he passed away. Bert was predeceased by one sister Betty Sinclair, three brothers; Mike Johnson, John Johnson, and Gene Johnson. Bert is survived by his son Duane Johnson and his partner in life Kelly Wheeler and her sons Aaron, Joshua & Carlen, his daughter Gwen Hampton and her husband Alan and his grandchildren; Landelle, Evan, and Levi Hampton, three sisters; Lila Meding, Molly Cosens, Linda Cosens, three brothers; Clarence Johnson, Ed Johnson, Melvin Johnson, his children’s mother Elaine Johnson, numerous nieces, nephews, and a lifetime of friends. A Celebration of Life was held for Bert on Saturday, September 15, 2018 at 4:00 P.M. at the Rumsey Community Hall. Family and close friends were invited to the Rumsey Cemetery at 3:00 P.M. for the Service of Committal. Memorial donations may be made in loving memory of Bert to Rumsey-Rowley 4-H Beef Club, c/o Kent Holowath, Box 127, Rumsey, Alberta T0J 2Y0 or Rumsey & District Ag Society, Box 60, Rumsey, Alberta, T0J 2Y0 Courtney-Winter’s Funeral Homes are in care of the arrangements.