On Wednesday, June 24, Canadian Blood Services will be hosting an extended blood donor clinic at the Stampede Grounds.
The clinic will be held at the Drumheller and District Agricultural Society’s Rodeo Grounds from 12 to 3 p.m., then 4 to 7 p.m. on June 24.
Read more: Blood clinic to be hosted...

It looks as if a bomb has gone off at the old Drumheller Composite High School building, as the initial demolition and rebuilding of a new and improved school is taking place.

On Wednesday, June 3, a “symbolic” step was taken as associate principal Don Ewing took a seat in a CAT claw and took the first piece of the east wing of DCHS to the ground.
Ewing grew up in Drumheller, first attending Newcastle School and then to the now-current DCHS school at the Central location from Grade 6 to 9, and graduating in the year-old DCHS location along Riverside in 1967.
After graduating, Ewing earned his teaching degree at the University of Calgary, came back to Drumheller to teach in the fall of 1973 at Greentree School. After his first year, the Grade 9's were transferred to DCHS and he has been there ever since.
“Lots of years,” Ewing says of his over 30 year career with DCHS, “I started in ‘74 and have been there ever since.”
“The demolition was purely symbolic,” Ewing says, as he was given the chance to help bring down the school he’s been a part of for most of his life.
“The building that I’ve been with for so long, you see it coming down... There is mixed emotions, but the time has come that it needs a rejuvenation,” Ewing says.
Principal Tom Zariski says the finishing of renovations and construction at DCHS is forecasted to be in the Fall of 2010, but due to delays, the gymnasium may still be undergoing work.
“It’s fine, we usually have phys. ed. classes outside in September and October any ways,” Zariski says.
“It seems to be coming along very well, the inside is completely gutted,” he says, while adding the inside could be practically finished while the outside will be one of the last steps to be completed.
The new building will be one third smaller than the current building, as DCHS boasted a student population of close to 1,000 at one point.
“For the last 15 years we had so much space we weren’t using, it was ridiculous. It was configured as a high school and not a junior/senior, so a lot of the areas we couldn’t use will be re-configured,” Zariski says.
The east side of the school (facing the football field), is the only part being torn down, as the west face of the building will simply undergo a face-lift of renovations.
Where the library is now, will be the administrative offices, and where the gym currently sits, will be turned into the new library and computer lab area.
The new gym will be much larger than the present one, and Ewing said the science labs will be receiving new equipment.
"It will certainly be well stocked, Ewing says. "We'll be bringing in new equipment. When you buy a new house you don' fill it with furniture from a garage sale." 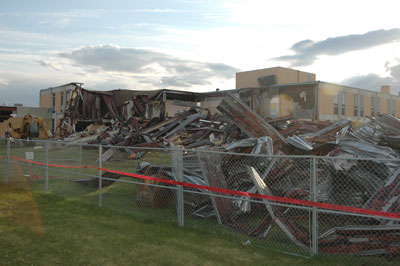