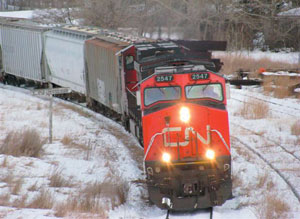 The newly formed Badlands Railway Company has officially notified CN Rail it wishes to begin the negotiation process to acquire the rail line from Oyen to Lyalta.
The company has been working hard to raise the needed commitment and capital from area producers to be in a position to make that offer. While it did not reach its initial goal, the company feels it is in a good position to start the process.
“Our initial goal was to reach a shareholder base of 200 and a seed capital base of $300,000. As of February 5, we were half-way to that goal,” said interim president Dwayne Marshman. “As a board we feel we have sufficient support from the producers, businesses and communities to move forward and notify CN we are in a position to begin negotiations on an offer.”
He says if the company can come to an agreement with CN on the purchase and or partial lease and establish a final offer, the company will have to restructure and develop a share offering and structure that it feels best enables the company to raise the capital necessary to complete the deal.
While the company is ready to start the negotiations, it continues to solicit additional Class A shareholders, and will be scheduling meetings in the near future. Marshman encourages those interested to come out and take advantage of these initial shares.
“Once we have reached our goal for raising seed capital, we will have to cut off sales of these shares. In our new structure, if the board and shareholders so desire, we could and should makes these Class A shares convertible and transferable into our new structure,” he said. “There could be a slight reward for the initial investors at the discretion of the shareholders.” 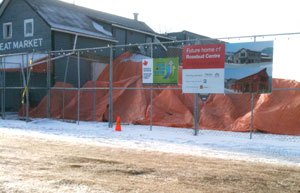 Rosebud School of The Arts has wasted no time in going ahead with the start of construction of the Rosebud Centre.
In October of last year, after many years of planning and lobbying, the school received federal and provincial money to work on the planned Rosebud Centre. The plan is for a two-storey 10,000 square foot development that will expand the theatre’s dining area, gift shop, and add a tourist information centre, withflexible teaching space for Rosebud School of the Arts.
The streetscape of Rosebud is in flux as construction has begun. A barrier has been set up on the south corner of the main intersection in the hamlet beside the Mercantile Dining Room. Krawford Construction Inc. of Calgary is the main contractor. The architects are Riddell Kurczaba of Calgary.
Bob Davis Executive Director, Rosebud Theatre says they began to break ground on the Rosebud Centre right after the cheque presentation last October. After some redesigning of the basement to meet new codes, they have continued and are close to finishing the foundation, and are almost ready to start framing up walls.
“We are still targeting a spring 2011 opening,” said Davis. “Even though we have gotten off to a slower start than we planned, we are looking at reaching our target.”
The Mail reported in its October 7, 2009 edition the federal government has committed $2 million to the project through the Community Adjustment Program. This is a two-year $1 billion national program that is part of Canada’s Economic Action Plan. According to a release, it is designed to provide an economic stimulus by supporting projects that create jobs and maintain employment in rural communities.
The provincial government also stepped up to the plate contributing $450,000 through the Community Facility Enhancement Program. They have also received contribution through the private and corporate community.
He says, while the construction has begun, the fundraising will continue.
“We have set a target of $1,000,000 to raise to bring the project to completion, but we are able to do a substantial amount of the construction with the money we have,” said Davis.
The Rosebud Centre is not the only change to the vibrant hamlet. Right across from the Rosebud Centre is the newly refurbished Rosebud Museum. The Rosebud Fire Department is in the midst of its own project, a new fire hall just north of the main intersection.
“Those three buildings have been key projects for the community and they are all coming together,” said Davis. "One thing it is doing is giving Rosebud the capacity to grow. The fire hall can now house the appropriate fire equipment. As the community grows so does the need for infrastructure.”
“On the museum side, with the number of tourist who come through, it is important for the museum to have more space to display, washrooms for the public, and opportunities to engage the public with another a piece of the Rosebud experience.”
Akokiniskway has also expanded its campground, and the High Eagle RV Resort (at the site of the former Lions Campground) is now a fully serviced RV site.

Town council is putting together a task force to re-examine options for parking downtown.
This comes after a lively town council meeting, where around 25 merchants and residents attended to make their views known, represented by David Benci.
A motion, put forward by Councillor Karen Bertamini, proposed, “That council appoints a task force to review parking options on a portion of 3rd Avenue between 2nd Street West and 1st Street East.  The task force to consist of two town councillors, two members of the Drumheller and District Chamber, two members of the downtown committee and two members of the public at large, those two members will be chosen by that task force. The task force is to report back to  council with recommendations on how they would like to move forward to the regular scheduled Committee of the Whole meeting on April 12.”
The motion was carried unanimously.
During his presentation, Benci, owner of Pizza 249,  highlighted the result of the survey recently conducted for Drumheller residents to express their views.
The survey received a total of 1,687 responses, with 99.58 per cent wanting the diagonal parking to remain the same and with 96 per cent rating this issue as very important.
Benci also explained the Chamber of Commerce had done its own survey of its 231 members, of which 115 responses were received, with 85 per cent opposed to parallel parking.
Benci said “we agree that …there are both advantages and disadvantages to either of the two parking choices, we are firmly convinced that diagonal parking is the best choice for downtown Drumheller and that parallel parking would be a huge disaster.”
He added, “There has never been any question as to what the majority of businesses owners of downtown Drumheller want. We have proven beyond any shadow of a doubt that the general public also indicate their overwhelming choice would be diagonal parking. Town council no longer should wonder what their choice is, they must represent the will of the majority, democracy must prevail.”
Benci further expressed their expectation for council to rescind the motion MO2009.202 of November 9, 2009 and leave parking as is in downtown Drumheller.
He concluded by asking council if they had answers to the questions put to them during the invitation only meeting organized by the Chamber of February 3. None were given.
Councillor Bertamini then put forward the motion.
Bertamini explained she chose the date of April 12, as a Committee of the Whole meeting is when information can come forward, following which council can direct administration to prepare requests for decision for the following regular council meeting on April 19.
Councillor Sharel Shoff mentioned the notice of motion she had put on the agenda, “To delay the implementation of parallel parking for one year, while the town completes the offside parking sites, evaluates the effectiveness of offsite parking and facilitates communication with the citizens at large.”
Shoff was advised this motion could be put forward after the task force presented their findings.
The Mayor asked that the Chamber and the downtown association select their members as soon as possible.  The Town will advertise for applications from members of the public interested in being part of the task force.
David Benci told inSide Drumheller: “Personally, I was disappointed with the meeting, the motion that was put forward wasn’t what I had proposed. I asked if they had any answers to our questions and they didn’t answer any. The primary objective is to rescind parallel parking which they did not do, as a matter of fact they postponed another motion that was going to put a moratorium on it for a year and so in my opinion it was a waste of time.”
When asked whether he was considering being part of the task force, Benci replied, “No. I think it is a waste of time. There is no point in talking to town council... because we have talked to them for three months and we have had absolutely no answers, if we want answers we have to look them up? The onus should be on them to give us those answers not on us to dig up the answers.”
The downtown association will be meeting soon to discuss the way forward. Benci said they will still be involved with the task force, explaining, “It’s not the committee that I proposed, it’s a task force that they proposed so it has been taken right out of our hands.”
Councillor Bertamini has since told inSide Drumheller that the Mayor has elected Councillors Andrew Berdahl and Blaine McDonald to be part of the task force, and said, “The Mayor has made a request that those Councillors not be the chair because he does not want the town to be viewed as leading this, but as participating in a consultative process.”