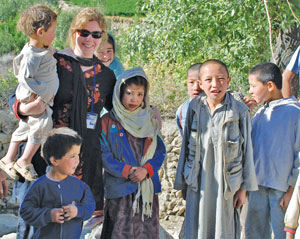 Sky McLaugllin is not only hoping to raise awareness of the plight of people in Afghanistan but also help them through her latest endeavour.
McLaughlin has dedicated a portion of her career to developing international education programs. In 2007 she accepted a position with the USAID funded Afghanistan Higher Education Program to develop the capacity of the Afghan higher education system. Her latest endeavour allows her to contribute to the rebuilding of Afghanistan.
This Saturday, November 14, McLaughlin will be at the Ramada Conference Room from 10 a.m. to 4 p.m. More than just novelty imports, these are handcrafted works from the people.
“During my two years in Kabul I had the opportunity to travel throughout the country and learn about the history, culture and traditions of the Afghan people. They have suffered decades of conflict and extreme poverty, but have a beauty and resilience I have not seen elsewhere. They are a people of spirit, faith and warmth,” she said.
“I wanted to continue to contribute to the rebuilding of Afghanistan. One way that I could do that was to support, in a small way, the economic development of the country by importing a range of unique, traditional, hand-crafted items from across Afghanistan. In so doing, my company Gandhara Designs provides access to the Canadian market for women, refugees and artisans. This activity is a form of direct aid - supporting individuals to reclaim traditional skills, earn an income by receiving fair wages for their labour and feed and educate their families.”
“I have been working in industry and working with people getting their goals and ideas off the ground for more than 10 years,” she said.
“Obviously my goal is to support the people in Afghanistan but it is viable for Canada as well. I think people are looking for a more ethical, more sustainable way of giving that they can focus their financial resources on, and they are interested in buying from smaller corporations knowing their efforts are making a direct impact on the quality of people’s lives.”
McLaughlin has roots in the valley. Her family were homesteaders in the area. Her great grandparents Lorne and Annie Tario, and Bill and Pauline Ritchie (nee Martin) settled in the Michichi area. Her mother Wendy Tario is from Drumheller.
“The reason I picked Drumheller is I’m looking to come home. I’ve been away for a very long time and I have lived in very large cities and around the world, but my spirit has always been here,” she said.
Another reason for her launch in Drumheller has to do with the people of the area.
“People in small towns have that natural affinity to these kind of things because Albertans come from a rural economy, and Afghans come from a rural economy, agriculture is what sustains them.”
“The Canadian debate about Afghanistan focuses on whether or not our military should remain engaged in Kandahar. From my perspective, there are many other issues Canadians could be debating. One of those is how to develop an Afghan economy so that there are real changes in the daily life of the most impoverished - changes that bring food to the hungry, education to the illiterate and employment to widows and refugees,” she said.
Her display at the Ramada this Saturday will be more than a great chance for people to come and check out some interesting items in time for Christmas shopping.
Beyond that, she could see a relationship between Drumheller and a community in Afghanistan.
“Ideally in the long term there is possibilities of some twinning between Drumheller and a village or small city in Afghanistan. There is so much expertise in Drumheller in terms of agriculture, environmental conservation and water conservation.” 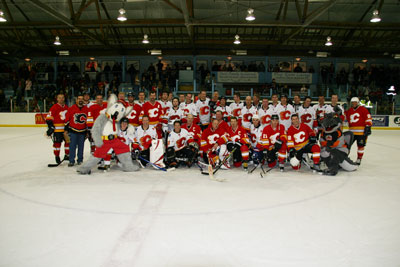 A packed house at the Drumheller Memorial Arena affirms the Alumni Calgary Flames are still stars wherever they go.
It also shows the Badlands Community Centre has strong support from area residents.
There was standing room only last Wednesday night as an all star team of Drumheller hockey players took on a squad of ‘forever Flames’ that included Theoren Fleury, Jim Peplinski, Jamie Macoun and the unmistakable Lanny McDonald.
Dave Powell organized the event at Drumheller Memorial Arena. He had trouble putting into words how he felt about the event.
"I am ecstatic about the way things went,” said Powell. 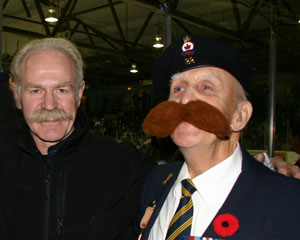 He said the Flames organization, from the first conversations with Jim Peplinski, right up to the day of the event, were very supportive.
The Flames freely interacted with fans at the arena and at the meet and greet directly after the game. Never turning down a request from a fan for an autograph, or to pose for a photo, they were accessible from start to finish. There was a flurry around Fleury of jerseys, pennants and copies of his autobiography Playing With Fire, all waiting for his autograph. 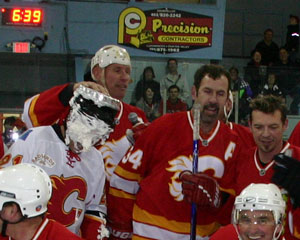 On the ice, they provided exciting action for the fans. At times an all star team, at times sporting Harlem Globetrotter-style showmanship. Gary Chambers, who scored the first goal for the Drumheller team received a pie in the face for his troubles. Vocal coaching from Lanny McDonald kept the audience in stitches throughout the match.
Even with the showmanship, there was no question the players had not lost a step and could turn on their A-game at the drop of a puck.
Tony Lacher, co-chair of the Badlands Community Facility Steering Committee, said the event was just what they needed to kick off the fundraising campaign.
“We wanted to fill the arena. More than anything we wanted to see a good crowd, and that is the energy we needed to get the project off on the right foot,” said Lacher.


Mayor Bryce Nimmo echoed the sentiment.
“What struck me was the groundswell of people. When you see the number of people going full blast like this, it can only get better as time goes on,” "People are going to see this happen, (the community facility), and it will be good for our town.”
Nimmo praised the strength of the organizers who put so much time into the event and was appreciative to EnCana and Stacy Knull. EnCana jumped in first to start the fundraising efforts by donating $500,000 to the cause.
Peplinski also recognized the organizers at the end of the game.
“Thanks for bringing us into play. For us guys, we just like to come out and play, and when you have people who are doing good things for the community, it just makes it that much more fun,” he said.
This is just the start for the Badlands Community Facility. The next day, on Thursday, November 12, ground was broken on the Badlands Community Facility site. Next Wednesday and Thursday, November 18 and 19, is the Drumheller Rotary Radio Auction. The proceeds from this event will be directed to the Badlands Community Facility Project also. 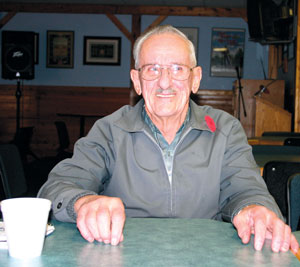 Sergeant Major 2nd Class Joseph Asquin joined the service in 1946 at the age of 15.
His time was served with the military police. He spent several years in Korea and Japan.
“I remember some of my crew and I pulled three trees together to build an observation post where I sat to observe no mans land, next thing I knew out of no where there was a row of Korean children walking our way and then a row of women. Behind them was a row of Korean soldiers who opened fire. The Americans came with their planes and I ended up being shot in my leg,” said Asquin.
Asquin also spent time in Egypt where he saw ships that were sunk intentionally in the Suez Canal.
“I was there when they sunk those ships in the Suez Canal, there were a lot of them,” said Asquin.
Approximately 40 ships were intentionally sunk in the Suez Canal to block shipping lanes, afterward a truce was arranged and the Canal reopened.
Asquin was then sent back to Japan and Korea where he carried out the remainder of his time with the Military Police.
Asquin came back to Drumheller where he was born and has remained here since then.
Joseph’s father Jean Pierre Asquin along with a blacksmith built the Little Church out on Dinosaur trail, one of Drumheller’s historical landmarks.
Joeseph Asquin would rather not think back to those times.
“They take care of me now, my medications are all paid for and I receive my money every month. I am happy about that,”
Asquin will be laying a wreath for Korean Veterans on Remembrance Day, something he does every year.
Lest we forget, Lest we forget.