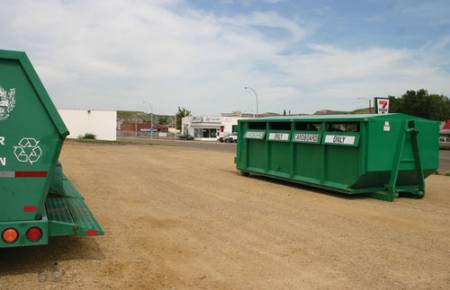 The two recycling centres, located at the Drumheller Greentree Mall parking lot and opposite the 7-Eleven store are to be fitted with monitoring equipment to help prevent scavenging, confirmed Tammi Nygaard, landfill operations manager.
As previously reported in The Mail, February 24 edition, Nygaard updated  inSide Drumheller the installation of monitoring equipment has now been approved.
“We are going to be doing it, it is just a matter of sourcing the equipment, figuring out where they are going to go, what kind of camera we are going to use,” she said, adding that the downtown drop off, now situated opposite the 7-Eleven, would probably be the first site fitted with the equipment.
“It’s more central and more open...We are anticipating a lot more abuse at that site because of its location.”
Nygaard also said they are experiencing problems with people not flatpacking their cardboard recycling.
“People need to break the cardboard down,” she explained. “Partially collapse d boxes open again when they are inside the bin, creating voids...We’d like more to be put in the container before we transport it because we are pretty much transporting air in some cases right now. We are trying to get the maximum payload on the bins so the revenue from the product will cover the transport costs.” 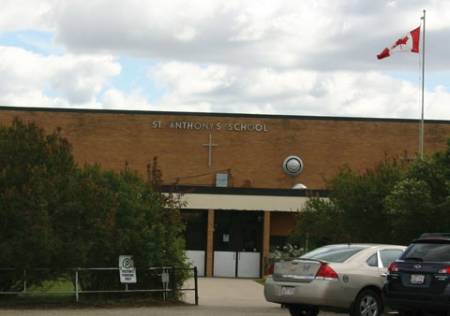 Once vacated, the current St. Anthony’s School building is being considered as the ideal location for the launch of the post secondary college project by the Hope Health Initiative.
Project manager, Jordan Webber, told The Mail the Hope Health Initiative is close to finalizing the financial projections and progress is being made on the business plan. Operational decision would also soon be made on how to implement the project.
The Hope Health Initiative is preparing to do a site plan on the old hospital building, however, the preferred location for launching the school is at the St. Anthony’s School building, which should be vacated in 2011.
“We are still thinking the old hospital would be a possible spot for the school but we have concluded we will not launch at that facility. We are looking to lease a substantial portion of the St. Anthony’s School.”
As reported in The Mail’s June 2 edition, once vacated, St. Anthony’s School is being eyed by The Elim Pentecostal Tabernacle who will be looking at sharing the space with other organizations.
Webber said that some of the development needed in the long term on the former hospital location may be started in the next couple of years,
“Residence facilities to house students will probably happen at that site, even in the near future,” he said.
The initiative is still studying which unique program to deliver to make the post secondary college a success and one of the options being closely looked at is rural health delivery.
“Rural health delivery is very unique from urban health delivery because of the diverse skill set that it takes a person to be efficient in a rural setting, whereas in an urban setting, people are more specialized, so it’s a much more well rounded and thorough education that a rural practioner requires,” Webber said. He added offering the specific rural setting skill sets could give a unique educational experience, needed to attract students.
The Hope Health Initiative will be hosting a public forum in late August, date yet to be confirmed.