Drumheller RCMP are investigating an assault on a female victim that occurred on 3rd Avenue West near the Courthouse parking lot on Saturday March 27 at 1 a.m.
This incident was reported to the police several days later.
The female victim was walking a friend home after an evening of socializing in the downtown area.  After the victim dropped her friend off at a residence near McConkey Park, she walked back towards downtown Drumheller on 3rd Avenue.
The victim encountered two males who attempted to make conversation with her. One of the males crossed the road and as he met the victim, he grabbed her by the wrist.  The victim was able to break free from the suspect.   The victim twisted the offenders fingers back, and kicked him in the knee area.
The offender may have received injury to his hand, and to his knee or leg.  The other male was walking over to the victim, but the victim was able to flee the area before any further altercations occurred.
One suspect is described as a caucasian male, early 20’s, 6-feet in height, wearing jeans, jacket, short dark hair.  The suspect may have received injuries to one of his knees or leg and possibly received some medical treatment for injuries.
The second suspect is described as caucasian male, early 20’s, 5-foot 9-inches in height, dark,  wavy collar length hair wearing a jacket and jeans.
Several physical altercations have occurred in this general area during the last number of months.  Police are asking for  the public’s assistance in solving these crimes, and that extra caution be taken when travelling on foot at night in this area.  All the assaults have occurred when the victims are walking alone.
If anyone has any information regarding these two people or the assault, please call Drumheller RCMP Detachment at 403-823-7590, or Crimestoppers at 1-800-222-TIPS (8477). 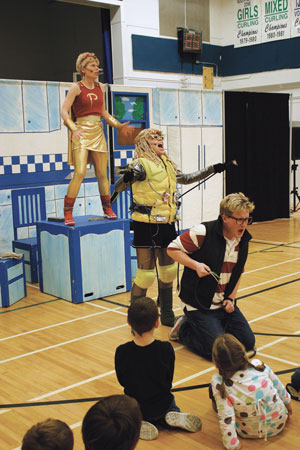 Grade 4-6 students from Delia and Morrin were delighted by  ATCO Energy Theatre’s Super Power show when it came to Morrin School  on Thursday afternoon, April 15. The purpose of the show is to teach customers and future customers about the hazards, as well as how to be safe around electricity and natural gas. ATCO Energy Theatre is on a four week tour of schools in central and southern Alberta in communities served by ATCO Electric and ATCO Gas. This is its fifth tour of Super Power since its introduction in 2007. Above, 'Rocket Socket', centre, tempts 'The Kid' with unsafe practices and Power Woman is put on the offensive.