In the wake of a torrential downpour that saw the streets of Rockyford flood over two inches Monday, the town has made applications for disaster funding in assisting nearly half the village’s homes suffering “phenomenal” damage.
The heaven’s opened around 4:30 p.m. on Monday, July 13, dropping over five inches of water onto the town in a two hour window.

An army of restoration companies worked until the early morning hours of Tuesday pumping out toxic sewage that backed up as much as two feet in some homes.

“We saw things on Monday that we’ve never seen in our lifetime,” says Rockyford Mayor Darcy Burke.
The village is making an application for financial assistance from Alberta Disaster Services.
Burke was given no indication of when funding would come in, if ever. “As with the provincial government, sometimes those wheels turn slowly.”
“We are living in disarray,” says homeowner Pam Eleniak.
“I’ve never expected anything like this before,” she said. The family’s basement is gutted, water-heater destroyed, and the walls had to be torn down.
“We have a 14 foot pool in the backyard. It was empty before the rain started, and by the end there was over 8 feet of water in it,” Eleniak told The Mail.
“You could only see half a block, the water was coming down that hard,” said the mayor.
Over 70 homes of only 146 in the village, and 8 businesses suffered severe damage from the flood that last over two hours.
Rockyford’s sewer system could not handle the downpour, pushing sewage into nearly every household in the small village.
Although Eleniak says the insurance company has been excellent, the village mayor says this isn’t the case for all residents.
“Everything is back to normal regarding sewage. I’m hearing some stories where people are having difficiulties with their insurance companies,” Burke said.
From now it’s just a clean-up process says Burke, “for the most part it’s all just tangible assets. No lives, no injuries.”
Burke adds that the mood in town has remained in good spirit, as it always had, but it’s not without shock factor.
“The thing is, with a small community you’ll never be alone.
“I want to thank all the volunteers that came out to help the fire department and their neighbours with clean-up.”
With everything, there is an upside to the serious flooding.
“I joked with some of the farmers, and said ‘if you were asking for five inches of rain you could have spread it out over the next two months’”, laughs Burke. 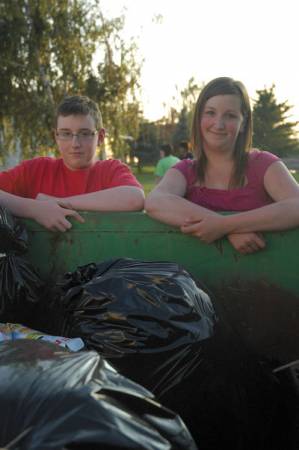