Is Drumheller really the Dinosaur Capital of the World? | DrumhellerMail
05182022Wed

Tweet
Drumheller, the majestic valley, home of a rich mining history, and of course the Dinosaur Capital of the World!
Wait a minute! Stop the presses!

It seems the title that tops much of the Town of Drumheller’s letterhead, and is a catch phase that goes back–well to the dinosaurs, may be in contention. Is Drumheller the Dinosaur Capital of the World?
While contention may be a strong word, after all, who can compete with Drumheller? The valley has a rich history of dinosaur bone excavation going back more than a century, and of course the Royal Tyrrell Museum. It is hard to go a block in downtown Drumheller without seeing a statue of a dinosaur. This all makes it hard to argue that Drumheller is not the capital.
But there has been a little discussion…
On a blog on the Smithsonian website, the director of the Burpee Museum of Natural History and the Discovery Center Museum in Rockford, Illinois, upon the expansion of the museums said, “we think we’re going to be the dinosaur capital of the world.”
The person who posted the quote asked the logical question: “What is the present dinosaur capital of the world? The town of Drumheller in Alberta, Canada justifiably touts itself as a top dino spot, but the town of Glen Rose, Texas has also been playing up its reputation as a place rich in dinosaur fossils. Which town deserves the title of the “Dinosaur Capital of the World?”
They even added a poll, and so far, Drumheller seems to be lagging in a big way. As of Monday, of the 1,052 votes cast, Drumheller is in a distant second place with 67 votes. Glen Rose, Texas has a commanding lead, with 860 votes. Also in the distant running is Liaoning, China and Bedrock, Hanna-Barbera Land.
So, what does this mean? Is it time to change the signs, maybe put the World’s Largest Dinosaur on skids and head to the Lone Star State? There is no question that most of these locales are incredible, but the capital?
Not so fast says a number of Drumheller residents who are not ready to give up the title.
“We have a big dinosaur of course for openers,” says town councillor Don Guidolin who has lived in the valley all his life. While he served for many years as an administrator at City Hall, he does not know exactly when it adopted the “Dinosaur Capital of the World" slogan, but does say history is behind our claims.
In 1884 Joseph Burr Tyrrell discovered the Albertosuarus and uncovered a wealth of dinosaur specimens in the valley.
Guidolin shows an edition of the Collier’s New Encyclopedia, published in 1921 with a picture of a campsite established in the valley excavating for dinosaur bones.
“In the 1920’s you couldn’t even get into China,” says Guidolin.
This history of exploration and collection has continued until today. Don Brinkman director of preservation and research at the Royal Tyrrell Museum says along with the history, the diversity of the finds in the Red Deer River Valley is what sets it apart.
“Glen Rose doesn’t have the diversity. It has nice footprints, but just footprints,” said Brinkman.
The facilities in Drumheller, and its notoriety are also a big factor weighing for Drumheller.
“There is international awareness of the locality, he said, adding the Royal designation also is important," he said.    Bob Llewellyn knows about dinosaurs, and the valley. He was one of the first directors on the Royal Tyrrell Museum board, and was president of the Badlands Historical Museum. He also owned the Coal Mine museum in Drumheller.  He says the town deserves the title.
“Nobody promotes dinosaurs any more than Drumheller,” said Llewellyn. “We’ve been using it for years, and I don’t think anyone has come to disclaim it.”
One competitor he writes off is Bedrock.
“They are talking about a cartoon and we have the real thing,” he said.
The designation is a mark of pride for Llewellyn.
“This goes back to the late 1800’s. I don’t think we have to worry about anyone else, I think we have a lot going for us,” he said. “The fact is, we are known all over the place…I don’t think we have to sit back and take guff from anybody.”
To view the poll go to http://blogs.smithsonianmag.com/dinosaur/2009/06/16/where-is-the-dinosaur-capital-of-the-world/ 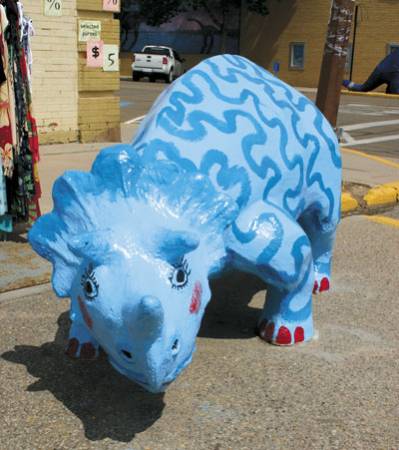