Tweet
Slavery seems to be a thing of the past, with Canada never having legally allowed it and its neighbour of the south abolishing it at the conclusion of the civil war. And the Sunday school class at Morrin Church has been studying modern day slavery  for months, and hopes to do something about it on June 22 at the Napier Theatre


Human trafficking is not a thing of the past, with estimated 27,000,000 people still being traded around the globe, including in Canada.


The class has come together to put on Call and Response, a documentary on modern day slavery since the abolishing of the trans-Atlantic slave runs, with the involvement of music, spearheaded by musician Justin Dillan. He wanted to put on a benefit concert, but ended up making a film.


Call & Response is an enlightening yet inspiring film about the realities of modern-day slavery.


This rockumentary contains performances from groups like Switchfoot, Natasha Bedingfield, and Moby, and interviews with luminaries such as Ashley Judd, Madeline Albright, and Cornel West, all aimed at helping people understand this problem and what they can do it about.


“What excited my, personally as a mentor to these kids, not just that it makes people aware of the issue, but it’s inspiring. It really makes you want to make a response,” said Sunday school instructor, Mark Lewandowski.


“An individual anywhere in the world can have an impact,” he said.
Slavery occurs in many industries throughout the world: sex trade; manufacturing (clothing, cigarettes); mining; agriculture (coffee, chocolate, fruit and vegetables); child soldiers; domestic workers (maids, live-in nannies); restaurant and hotel.


“I think this generation has the ability to change the world, a strong social conscience, but they don’t necessarily know how to do it,” Lewandowski said. “How exciting it would be for the youth of Drumheller to pick up this cause or another cause, that they can have an impact to their’s and the global society.”
The class plans to either donate the proceeds to a Call and Response related cause, or use the remaining money for another event, and they are entertaining the idea of bringing Justin Dillan out next year. 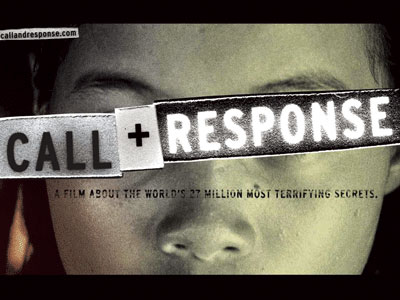