Tweet
Drumheller motorists and residents got a glimpse of where the sun-don’t-shine this weekend, as nearly two dozen cyclists went as bare as they dared at Alberta’s, and Drumheller’s, first World Naked Bike Ride rode through town this weekend.

In the face on town disapproval for a parade permit and the threat of Drumheller RCMP upholding the laws of the country against public nudity, the 22 cyclists got together at The Melting Pot in Drumheller’s downtown and took their message to the street.


The goal was to raise awareness to motorists of cyclists, and the use of alternative transportation. And of course, the promotion of the human body in “various states of nudity”.


“It was really smooth, really fun,” says organizer Jennifer Chow. “We just wanted to get out that biking is good for you, good for the environment, and the fact that we’re out there biking.”


As crowds gathered to watch, the group left The Melting Pot at 3 p.m. Saturday, June 13, and ventured along Riverside Drive and back through the downtown core.


Drumheller was the first town in Alberta to host the event, an unlikely place says Chow.


“It makes it a new thing, a small town isn’t used to being precedent setting. I think it’s great for Drumheller,” she said.


People travelled as far as Calgary, Edmonton, and even one participant from Ontario let the wind hit a little harder Saturday.


Two EMS technicians trailed behind the group, perhaps to help out incase of chaffing.


“There could have been some serious scrapes if one of us would have fallen,” laughs Chow. 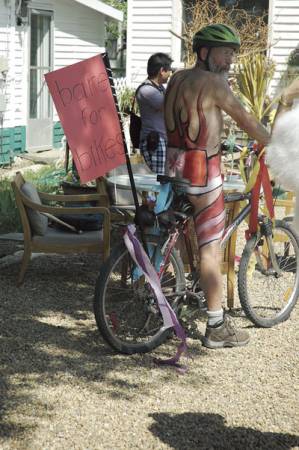