Tweet
What began as the creation of the sixteenth pendant for the Badlands Passion Play from a Drumheller jeweler, finished eerily symbolic of the death of the play’s leading character.

Doug Wade of Wade’s Jewellery in Drumheller started work on the sixteenth donated pendant for the Canadian Badlands Passion Play Auction on Friday, June 12, unaware of the fact the item would become a more powerful gesture than those of previous years.


Working with a pave design (placing as many diamonds as possible in a small space), and based on an painting by Sharon Krushel of the cross being emptied, Wade had obliviously placed 11 diamonds at the foot of the cross.


“When one of the three crosses was emptied, there was 11 disciples of 12 left alive. Same as the amount of diamonds,” Wade explains.


“To have this concept and to tell a story too, it’s pretty unique,” Wade says of the 14 karat gold necklace.


The pendant will be auctioned off on Friday, June 12 at the Passion Play’s Golf Tournament, Dinner, and Silent Auction at Dinosaur Trail Golf Course, to raise funds for the building of the Jerusalem Wall.


This pendant is the 48th from Wade’s Jewelry to be auctioned for charitable events in Drumheller; 16 for the play, 16 for the Badlands Ski Hill, and 16 for the Dinosaur Trail Golf Course.


Record sales for one pendant was $2,300, and Wade calculates by donating their pieces, over $55,000 has been earned for the three bodies. 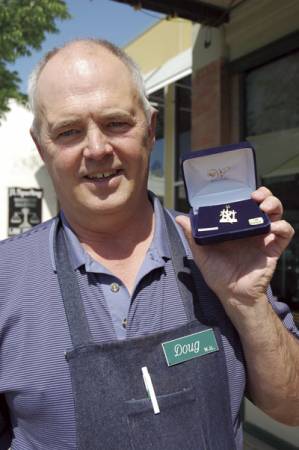