Tweet
Jonny Hamm, 15, a student at Drumheller’s St. Anthony’s School and resident of Rosebud, is one of the youngest survivors of cancer to walk in the the Drumheller Relay for Life’s survivor Victory Lap on June 12.

“It’s an honour,” Jonny says of his third year walking the lap which kicks off the event.
Although Jonny was too young to remember everything, he was diagnosed with a Wilm’s tumor, a type of cancer which generally targets victims under 15, at the tender age of 4.
“He was not noticably sick until four days before diagnosis,” says his mother Renita, who remembers everything. It wasn’t a long diagnosis that Jonny was sick. After complaining of pain, and struggling through four sleepless nights, the family brought Jonny to Calgary for testing.
“At first they said it was the flu, but eventually he had an ultrasound where they found a tumor on his right kidney,” said Renita.
Luckily, Jonny was diagnosed within four days of feeling ill.
“They immediately assured us we were in a good place,” she goes on. “The Children's Hospital in Calgary is one of the best in Canada for treating Wilm’s tumors.”
After surgery his tumor was assessed to be a stage three of four Wilm’s tumor, and Jonny went under the knife, with the tumor being successfully removed, but the fight was far from over as he then underwent radiation and six months of chemotherapy.
“I remember hating the medicine,” Jonny recalls. His mother had also said he was sick of doctors, he did not want anymore professionals touching him.
Jonny lost weight, hair, and was weak from the therapy. “He was very strong mentally though and remained a generally happy child” his mother says, not physically, but mentally. He spent 6 months in treatment and eventually recovered from the ordeal, to lead a “normal life.”
A success in what seems to be a sea of sobering stories with young cancer patients, Jonny is a young, active teenager who is currently training to enter the senior Drumheller Titans Football team, plays trombone with the St. Anthony’s school band, wall climbs, and on occasion his mother says, rides his bike the entire 37 kilometres from Rosebud to school in the morning.
“He’s very fit,” Renita says.
With cancer survivors, there is always fear and chance it will reemerge again in one form or another.
“This spring we were called back to the hospital because after his annual check-up they thought they’d seen something,” Renita recalls the scary message which turned out to be a false alarm. “It’s always a worry.”
“It was emotional for me the first time,” Renita says of Jonny’s first year in the Victory Lap.
“The first year, he was walking and this other lady asked to walk with him. They linked arms and did a lap. She had battled cancer before, and thought she was facing another bout in her liver. Jonny was her inspiration, she was a friend for the lap but we haven’t seen her since.”
Seeing Jonny among the many other survivors who join Relay for Life makes the point research does save lives, says Renita.
“When Jonny was diagnosed, I called my mother,” Renita said. “She said when my brother was four he was also diagnosed with either a cyst or Wilm’s tumor on his liver. The doctors had said if it was Wilm’s there was a high chance of fatality. Now we have a kid who had it, and lives a full, normal life. Raising money does help.”
Even though Jonny’s tumor was one of the more treatable kinds, Renita remembers the overwhelming support of her community in Rosebud and surrounding area.
“Dinner was always ready when we came back from the hospital. The Lion’s Club helped, the Good Neighbours Club and the church did too. The idea of being in a small community is powerful because of how the people helped. One year Santa even came and gave us presents. It was amazing,” Renita said.
“I remember all the things I had to do,” Jonny recalls. “I didn’t like the taste of the medicine, but I loved to watch Mr. Dress-Up and I loved Thomas the Tank Engine. That Christmas I got to watch the Calgary Fire Department decorate the tree with their truck at the Ronald McDonald House.”
Jonny will be continuing with annual precautionary check-ups until he is 21.
This story, although a scary and unknown road, is a happy one for Jonny and his family.
“It was a good ending, he lives a healthy life and enjoys it. Who knows what could have been.” 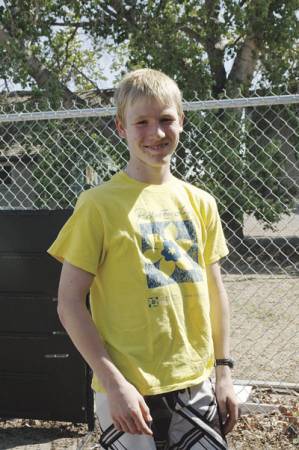