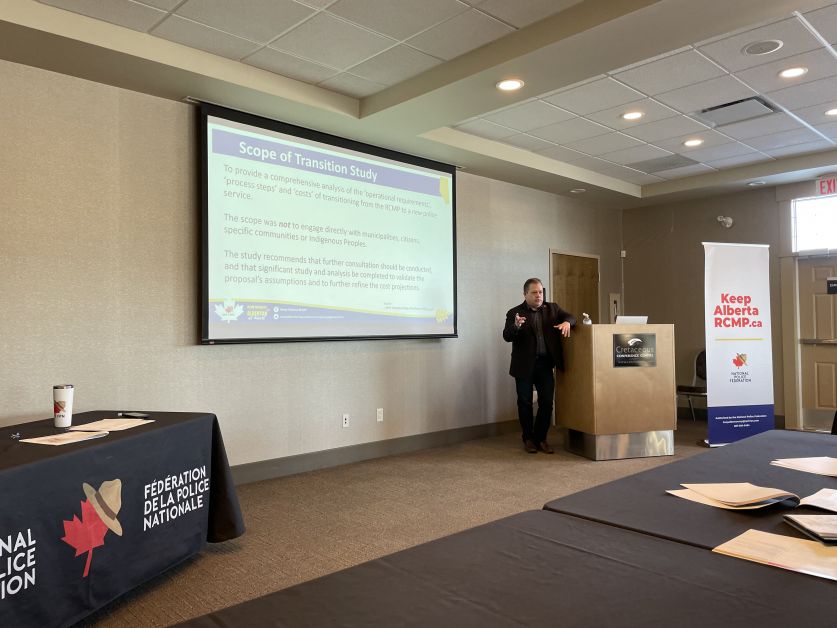 The National Police Federation (NPF) is hosting a series of community engagement events across the province to discuss the impacts of the Alberta government’s proposed change over to a provincial policing service.
KeepAlbertaRCMP Community Engagement tour addressed members of the Drumheller community at an in-person engagement session at the Canalta Jurassic Hotel on Wednesday, February 2; a virtual online event was also held the following evening for those unable to attend the in-person event.
“This (a provincial policing service) is not a priority for a vast majority of people in Alberta,” says NPF Prairie and North region director Kevin Halwa.
He explains, under the current provincial policing service contract, the federal government is responsible for 30 per cent of Alberta’s policing costs; in 2021 this equated to some $185 million in funding.
If the province were to move to a provincial policing service model the portion of federal funding would be downloaded onto taxpayers, and there are some indications the costs would far outweigh the current federal funding.
Based on the Pricewaterhouse Cooper (PwC) report presented at the engagement, there are two suggested models which would each have significant cost implications for Albertans.
The first scenario would see the number of fully trained police officers dropped by about half and cost some $734 million per year; the second scenario would keep with a similar service as is currently provided by the RCMP and would cost some $759 million per year.
However, Mr. Halwa explains there would also be some transitional costs associated, which he likens to starting up a brand new business. Estimates put the transitional costs between $366 million to $379 million, though these could be up to $1 billion.
Another concern is the loss of trained officers.
While former Minister of Justice and Solicitor General Kaycee Madu estimates approximately 15 per cent of the current RCMP force would stay through the transition to a provincial police model, Mr. Halwa notes this equates to only about 464 officers, leaving some 2,500 positions short.
“Recruiting for police, not just RCMP is a challenge,” he shares, noting other municipal police forces are struggling to recruit experienced officers.
In British Columbia, the Victoria Police Department has begun offering a $20,000 signing bonus to entice new members to enlist. Edmonton and Calgary departments are also looking abroad, to places like Scotland Yard, to recruit officers due to their own recruiting difficulties.
He explains when the Surrey Police Service recently transitioned from RCMP to a municipal police service it was expected a majority of current members would stay; however, this was not the case, and many of the department’s trained officers transferred to other municipal departments, such as Vancouver, or remained with the RCMP.
Mr. Halwa agrees there can be changes and improvements made to the current policing model and even encourages a review of the current service to “make sure we’re getting the best bang for our buck,” but is not suggesting to scrap everything and go “all from fresh.”
Although Minister Madu previously stated there was too much control from Ottawa on the RCMP, Mr. Halwa says this is simply not the case.
“Policing priorities are set 100 per cent by the province,” he explains.
He also adds transitioning to a provincial policing model will also not solve issues such as rural response times and addressing the drug and opioid crisis.
To address rural response times more officers on the ground are required; under the current model, the federal government would provide 30 per cent of the funding to put more officers into communities whereas a provincial service would leave the province fully responsible.
The drug and opioid crisis is a more difficult fix and Mr. Halwa says more officers is not the answer; rather, more financial resources and funding for supportive services to address issues such as homelessness and mental health.
Mr. Halwa says he hopes the provincial government begins listening to its people as he has heard many people are feeling unheard and independent surveys have shown there is some 80 per cent support to keep the RCMP with only a small per cent of people who agree a provincial police model is a good idea.
The KeepAlbertaRCMP community engagement tour continues until Friday, March 4 with in-person meetings across the province, and Mr. Halwa shares additional dates may be added.