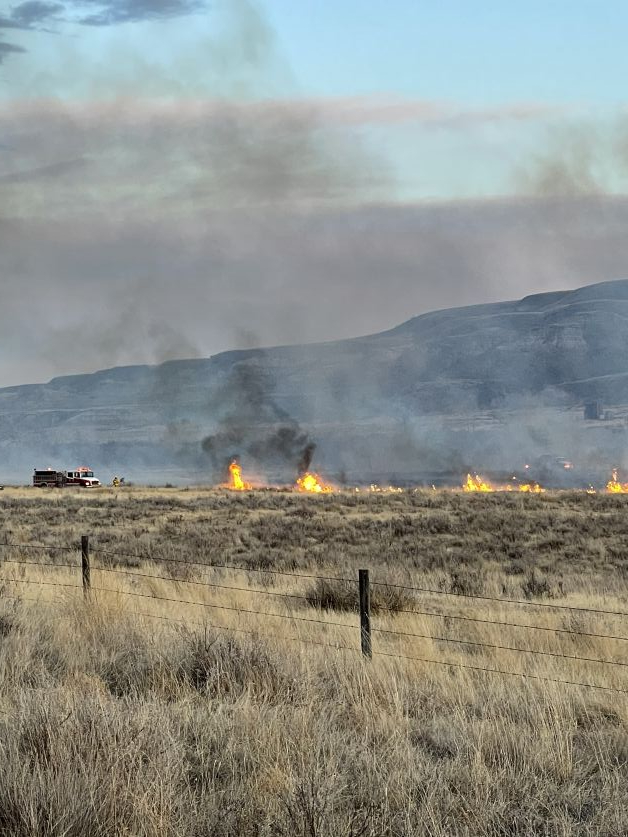 A short winter with very little snowpack has led to dry conditions. This, along with warm weather and high winds has towns and counties warning there is a high risk of fire.
On April 1, Wheatland County upgraded its Fire Ban Advisory to a full Fire Ban. This means permit burning in the county is banned and all outstanding permits are suspended. The ban prohibits fire and fireworks permits, fires contained within approved facilities and appliances in designated camping and recreational areas, incinerators (for farm and acreage use), recreational campfires (approved fire pit 24” in diameter or less), regulated burning barrels, and solid fuel barbecues (charcoal briquettes).
On March 22, Kneehill County issued a Fire Advisory.
On April 7, the Town of Drumheller issued a Fire Advisory, Fire Chief Bruce Wade says they are monitoring the situation closely. On March 19, the department responded to a grass fire near Dorothy that appears to have been started by a vehicle exhaust system igniting dry grass, and on Thursday, April 1, the department was called to a smoldering planter on a deck at a residence.
“I am certainly watching it very closely, it is really dry out,” said Wade. “We need a pile of moisture.”
He reminds residents to carefully dispose of smoking materials, and not to use planters to extinguish smoking materials because the dry plants or peat can ignite. Use a container with water. Also he says to make sure backyard fire pits are fully extinguished, and to burn clean firewood to reduce sparking and producing smoke.
Special Areas Fire Chief Glen Durand issued a press release warning of the dry conditions. It implemented a Fire Advisory on March 10.
According to the release, over the past few years, wildfires – specifically grassfires – have become more frequent and more destructive in this region. To help residents better protect properties and operations, Special Areas Fire Services are highlighting some easy fire prevention techniques from FireSmart Canada. FireSmart Canada is a national program that helps identify and reduce risks wildfires pose to communities and structures. Originally designed for the wildland/urban interface, this initiative is now used in all areas of the Province.
“Local fire departments have seen the difference fire prevention makes in reducing the impact of grassfires. FireSmart applies to everyone, especially as living in the Special Areas can mean long distances and travel times for fire departments. Implementing FireSmart in your yard, around your home, or on your larger operation is one of the best ways you can directly reduce your risks,” said Durand.
Launched last fall, a new FireSmart app is available to help rural residents and property owners identify simple, practical, proactive steps they can take to reduce wildfire risks. This free app is available for Android and iPhone users at Google Play and App Store.