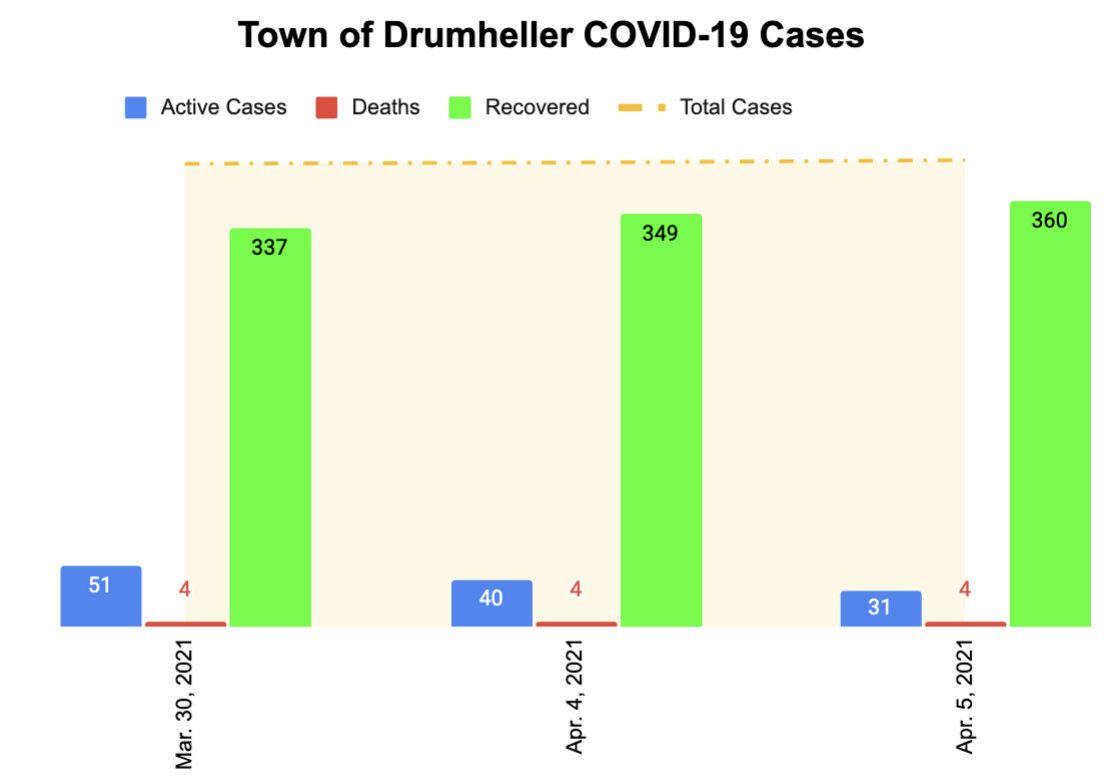 It was no April Fool’s joke when Alberta Premier Jason Kenney announced there would be no easing of restrictions ahead of the Easter long weekend during the Thursday, April 1 regular COVID update.
As new case numbers continue to climb, with 875 new cases reported during the Thursday update, so too are the number of variants of concern cases.
“Instead of delivering a message of openness and optimism, I’m here instead with a plea. Please, please follow Alberta’s health restrictions and guidelines this weekend, and in the weeks to come,” Premier Kenney said during the press conference.
He reminded Albertans of the ongoing restriction on indoor social gatherings, and encouraged those who wished to gather to do so outside with social distancing.
Since December 2020, when the first variants of concern were identified in the province, the number of new variant cases continues to climb. As of Thursday’s update, 322 of the 875 new cases were confirmed as a variant of concern, accounting for 39.2 per cent of all active cases across the province.
There have been 714 total variant cases in the Central Health Zone, which includes the Town of Drumheller; all these variant cases are the B.1.1.7 strain first identified in the United Kingdom (UK).
Due to the Easter long weekend there was no update on Monday, April 5; however, Alberta’s Chief Medical Officer of Health Dr. Deena Hinshaw provided an update via Twitter.
“Over the last 24 hours, we identified 887 new cases. Another 432 variants were confirmed, meaning 39 per cent of active cases are now variants,” Dr. Hinshaw said in a Tweet.
She also provided an update regarding an outbreak of a newly reported variant of concern in the province, the P.1 variant first identified in Brazil.
“At this time, the outbreak appears linked to a large employer with multiple sites across Western Canada. The outbreak started with a traveller returning to Alberta from out of province,” the update states. According to the update there have now been 26 cases linked to employees who travelled between three work sites in Central and North Health Zones, and their household members.
Dr. Hinshaw concluded the update saying, “I am concerned about the rising cases, including variants, in our province.”
While case numbers across the province continue to rise, locally cases remain steady following a spike in March which saw local daily cases surpass previous highs from November 2020.
As of Monday, April 5 there are 31 active and 360 recovered cases for the Town of Drumheller. This includes 14 active and 163 recovered cases among inmates at the Drumheller Institution. There are also two active cases in Wheatland County, seven in Starland County, and 17 in Kneehill County.

Alberta Premier Jason Kenney joined Chief Medical Officer of Health Dr. Deena Hinshaw during the COVID update on Tuesday, April 6 to announce Alberta will, effective immediately, be returning to Step 1 of the phased reopening due to rising cases of COVID-19 and its variants across the province.

Effective immediately, retail services and shopping malls will be limited to 15 per cent occupancy capacity, libraries will also be closed to the public, and fitness and indoor recreation is limited to one-on-one individual or household training with a professional trainer. Personal and wellness services, including hair salons and tattoo parlors, will remain open by appointment only.

Effective Friday, April 9 at noon, restaurants, pubs, bars, lounges and cafes will close for in-person dining, except for patio and takeout, curbside pickup, or delivery.

More details on Alberta's Path to Recovery will be provided at a later, undetermined date.