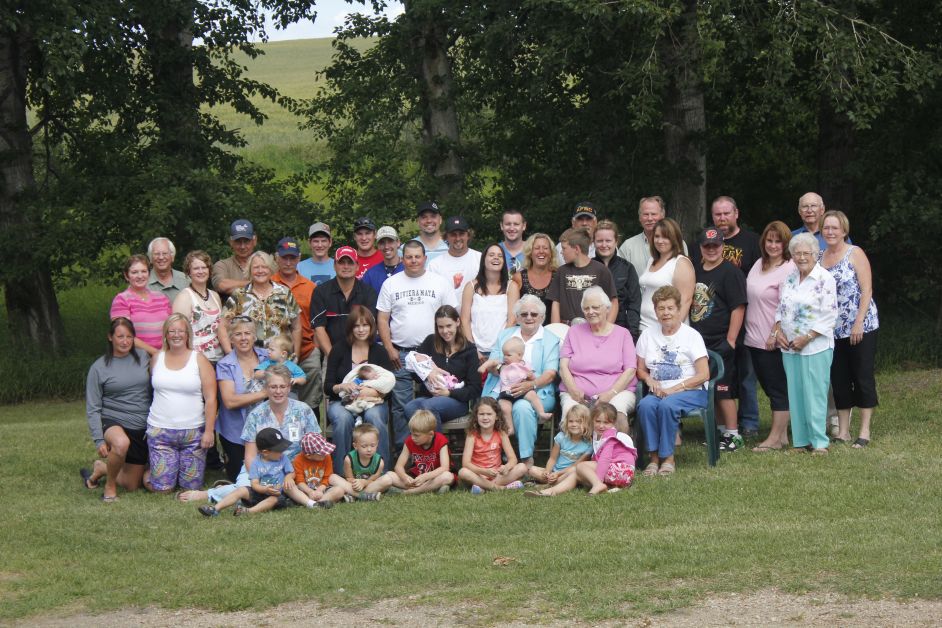 The Tainsh Family-Kneehill County
For Tim and Mary Lou Tainsh, the 2019 BMO Farm Family Award recipients for Kneehill County, the most important word in the accolade is “family.”
While Tim and Mary Lou will proudly display the gate sign that comes with the award on the entrance to their 4,800-acre mixed farm, the honour belongs to a much larger group, the couple insists.
“We might be the ones that are farming right now, but it’s in the involvement of everybody all through the years that has really made the farm what it is today,” Tim said. “It’s the whole family over the past hundred years and then the help in the community. And now, all five of us brothers help out.”
The farm by Keivers Lake was purchased by Scottish immigrants Peter and Mary Tainsh in 1916. One of their three children, Peter Jr., took over the farm. After marrying Helen Simons in 1947, they bought an adjoining farm where they raised their five sons, including Tim. One of the sons, Brian, started farming with his father in 1973. In 1985, Tim officially joined the family business.
After he married Mary Lou in 1986, the couple moved to the original homestead. They took over the full operation of the farm in 2006. The Tainshes raise grain, cattle and horses with the help of their brothers and sisters-in-law, extended family and three grown children, Allan, Christopher and Katie. Mary Lou’s animal health technician background comes in handy with the 170-head cow/calf portion of the operation, as well as with the Appaloosas they raise, train and show, and the quarter-horses they use to work the cattle.
It’s a lot of work, but their family can always be relied on to help out. Allan is a petroleum engineer who works in Fort McMurray, but lives near the farm with his fiancée Morgan. She’s also an animal health tech and raises and trains barrel racing horses. They both have an active role in running the farm. Christopher attends Midwestern University in Chicago, studying optometry, but pitches in whenever he’s home, as does his fiancée, Erica. And Katie is an agronomist with Nutrien, so her expertise is invaluable, her mom said.
“Our three kids have really taken to the farm life. I am sure down the road Allan will take over, but they are all really involved. We are very fortunate that we have the next generation coming up,” Mary Lou said.
That love of agriculture was reinforced through the family’s extensive involvement in 4-H. This year, Mary Lou is on the 4-H on Parade Committee with the Calgary Stampede, in addition to her regular volunteer roles at Horse Haven (showing off an Appaloosa every year) and Draft Horse Town.
The couple stressed their success wouldn’t be possible without the support they receive from Tim’s brothers and their wives — Jim and Carolyn; Norm and Gail; Brian and Terri; and Dennis and Kelly — whether it’s at harvest, during calving or running to town for parts.
“They’ve been an ongoing help for years, which we really appreciate. We’ve also recruited their kids,” Tim said.
“More hands make the workload easier, and more fun, too. It’s so great to have the family still so involved in the farm in some way,” Mary Lou added. 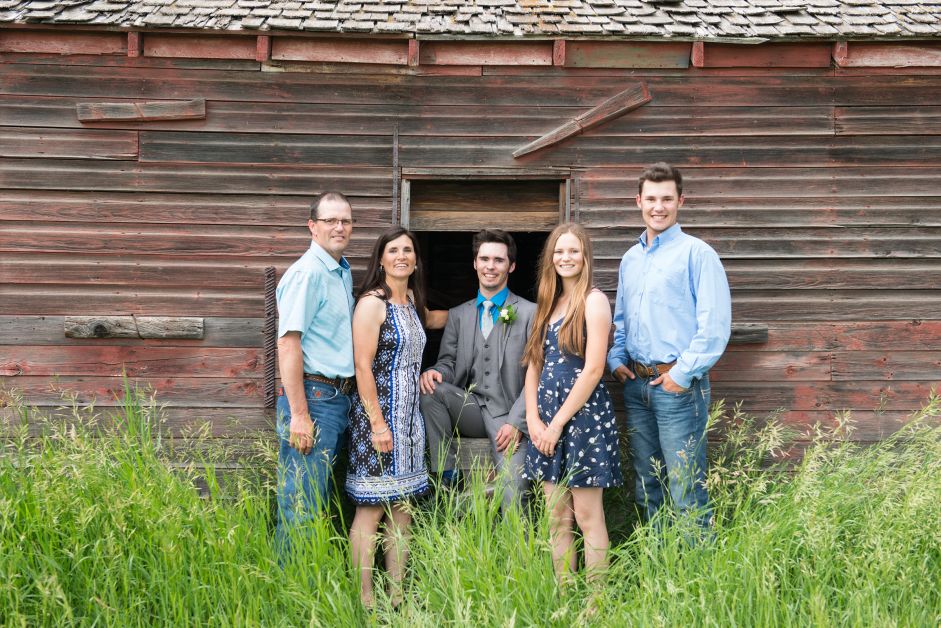 The Holowath family -Starland County
Kent Holowath has a hard fall to thank for falling for the woman who would become his wife and the mother of his children.
As a teenager, Holowath planned to keep working the family farm that his grandparents founded in the Rumsey area after they immigrated from the Ukraine. But Mother Nature had other plans.
“I just wanted to stay home and farm after high school in ’85, but it was a miserable fall, similar to what we experienced last year. And we didn’t quite have the closed-in equipment like we have now,” Holowath said. “It was brutally cold. I thought there had to be a better way, so I went to school.”
It was at Olds College that he met Jill McCormick, an Animal Health Technology major. The two married in 1990 and moved back to his family farm in 1991, working alongside his parents, Fred and Pat. The couple purchased the home half-section in 1997 and welcomed their first child, Garrett, that same year. Two more soon followed: Brett in 2000 and Amanda in 2002. Kent and Fred worked the farm together until Fred and Pat retired in 2009.
The 2019 BMO Farm Family for Starland County operate a mixed farm. They grow canola, wheat, barley, and hay, and the Holowaths recently introduced corn and cover crops into the rotation. In addition, they run 250-head purepred and commercial black Angus herd, selling the two-year-old bulls through private treaty.
Kent runs the day-to-day operation, with Jill and the three kids pitching in as needed. The next generation all seem to have the farming gene. Garrett just graduated from Olds College and is working for a neighbouring farmer. Brett is headed to the same school to study agricultural mechanics. And the youngest?
“Amanda, she is in love with the cattle. I keep asking her if she should become a nutritionist instead, but she hasn’t replied to me yet,” Holowath said.
Like her brothers, Amanda was involved in the Rumsey Rowley 4-H Beef Club as soon as she was old enough. Makes sense, as her parents are club leaders. And if there’s a committee or organization in Rumsey, chances are a Holowath has been involved. Kent and Jill have both sat on the board of the Rumsey Ag. Society a few times, with Kent’s last stint as president. Then add in the Rumsey Hall Board, the Rumsey Athletic Society, the Morrin Figure Skating Club and more. may be a small community, but it’s vital.
“The community hall and the curling rink act are the hub of the community. To entice the kids to come back, we need the community to be active. People see the value in it. Everyone is willing to help out. We want to give to these kids and the community and keep growing it,” Holowath said. “It’s very pleasing to see them coming back. You can go down on a Friday night and see a dozen 22 year olds visiting and playing cards.” 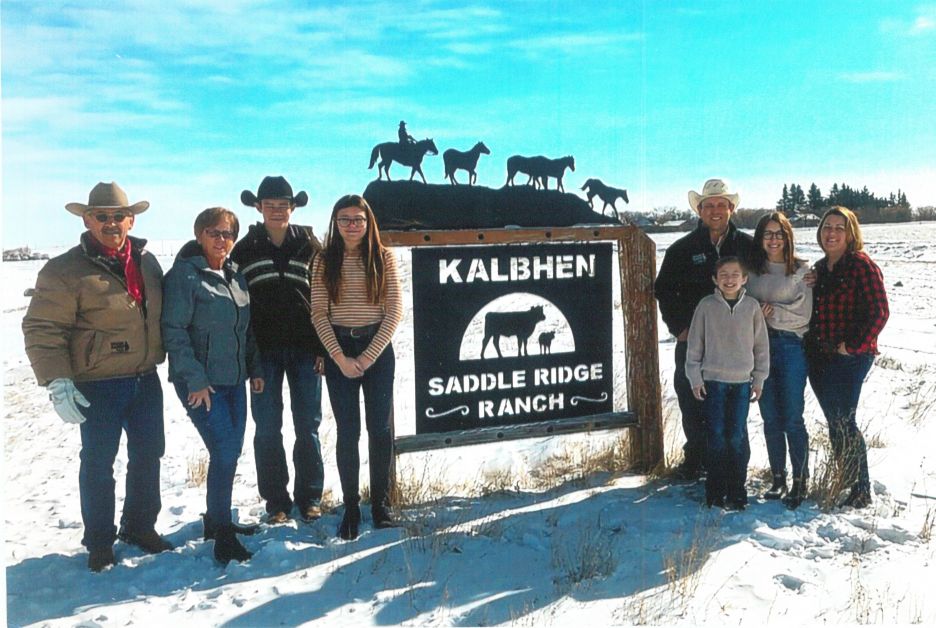 The Kalbhen Family -Wheatland County
Growing up, John Kalbhen and his older brother Billy would trail his father’s cattle from the family farm in Rockyford to the Strathmore area.
He didn’t know it then, but that grazing land 30-plus kilometres away would one day become Kalbhen’s own family operation, the Saddle Ridge Ranch.
“I loved the cowboy lifestyle and that became my dream. There was nothing else I ever wanted to do different. My dad was a stockman, but not into the cowboy life because he didn’t grow up with it,” Kalbhen said. “It was new to him, but I was picking it up from different people and then just continued on.”
Both his parents came from Germany: father Anthony in 1926, and mother Helen Kathol in 1928. After marrying in 1937, the couple started a farm from scratch in Rockyford. In 1958, they bought land next to that grazing land in the Strathmore area and slowly started reclaiming it. As they got older, Kalbhen and his brother bought a three-quarter section of their own alongside their parent’s land and set to work improving it as well.
After Kalbhen graduated from Olds College, he married Madonna Koester. The couple settled on an old ranch site on his parent’s land. In 1972, the brothers bought out their dad and started the Sturgeon River Ranch. For two decades, they built the operation, adding pivots on the reclaimed land in addition to operating a feedlot and cattle business. In 1992, the brothers split the operation, with Sturgeon now operated by Warren Kalbhen and Kalbhen establishing the Saddle Ridge Ranch.
Since then, the 2019 BMO Farm Family for Wheatland County has added 11 quarters to the ranch, in addition to renting three sections of grassland. They work their 600-head herd on horseback.
“We spend a lot of time on them. It’s kind of a lifestyle, too. We have a lot of good cowboys in the area and we’ll work together. And we enter ranch rodeos, with the roping and everything else. It’s a culture we really want to keep alive,” he said.
Son Dusty and daughter-in-law Dawn are taking over the daily activities and books of the Saddle Ridge Ranch. Their four children have always been involved in ranch activities, including calving, working cattle and haying. The couple’s other son, Jeff — the family’s “full-time cowboy” who did a lot of rodeoing — died in 1996 while crossing a river on horseback.
Daughter Brandy, son-in-law Scott Schiffner (a two-time Calgary Stampede bull riding champ) and their three daughters live just down the road on their S Bar S Ranch. The two ranches work back and forth, including selling their calves as one package at the Calgary Livestock Team Auction.
The family are longtime members of 4-H — Kalbhen is a big believer in the organization’s motto “Learn by doing” — and Dawn is currently the leader of the Rockyford 4-H Beef Club. Kalbhen has been involved with the Strathmore Rodeo Committee for 15 years and the Strathmore Ag Society for 25 years. Dusty is past president of that last organization, and has coached hockey locally for a decade.
“We’d like our grandchildren to be the fourth generation to continue ranching. It’s all about having faith, family and friends to keep the ranching heritage alive and thriving.”