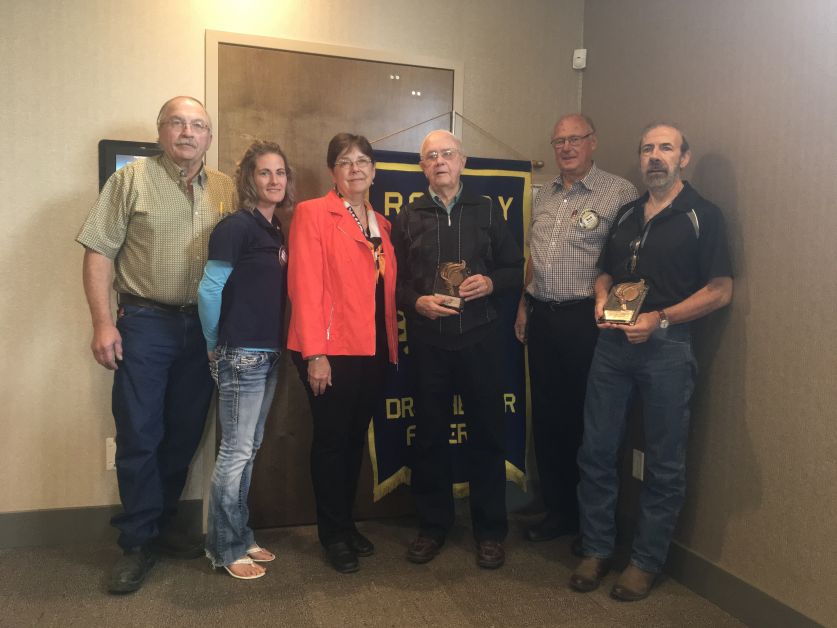 Two Drumheller men who helped raise over $120,000 for the Drumheller Health Centre were recognized as unsung heroes by the Rotary Club on Monday, September 10.

Over the last two years Chip Aiello and John McKenzie have been raising funds from local Hutterite colonies to donate to the Drumheller Area Health Foundation for new equipment in the intensive care unit, including four beds and the upcoming purchase of a wound evacuator, as well the purchase of two baby warmers and a ventilator unit.

“I don’t think we ever thought too much of this,” said McKenzie at the banquet. “We just went to the hospital and talked to administration and said we had this idea of how we could get a few bucks from the colonies. We did pretty good.”

Aiello credited McKenzie with coming up with the idea and said the worst that could have happened was the colonies simply saying ‘no’ to them. And they didn’t.

“It’s not all our story. It’s the fellas on the colonies, the plaque should be out there,” he said.

Drumheller Health Centre administrative secretary Linda Ames said the ability to purchase new equipment is vital for the success of the hospital.

“Alberta Health Services pays to maintain, it doesn’t pay for innovation. You might think you’re medical insurance will cover everything but it doesn’t. That’s where donations and support from the community come in, they take up that difference. You can’t attract good medical staff here if you don’t have good equipment,” she said, adding that the community supports the hospital with about $100,000 on average every year which makes a difference in the quality of service provided. “Without Chip and John, awareness of our needs wouldn’t have been on the radar for our Hutterite friends.”

The two men were nominated by Rotary member Rod Dormer who says they are truly unsung heroes as no one really knew about their project.

Their fundraising efforts are ongoing and the two don’t have plans to stop any time soon. They have raised $28,000 so far this year.