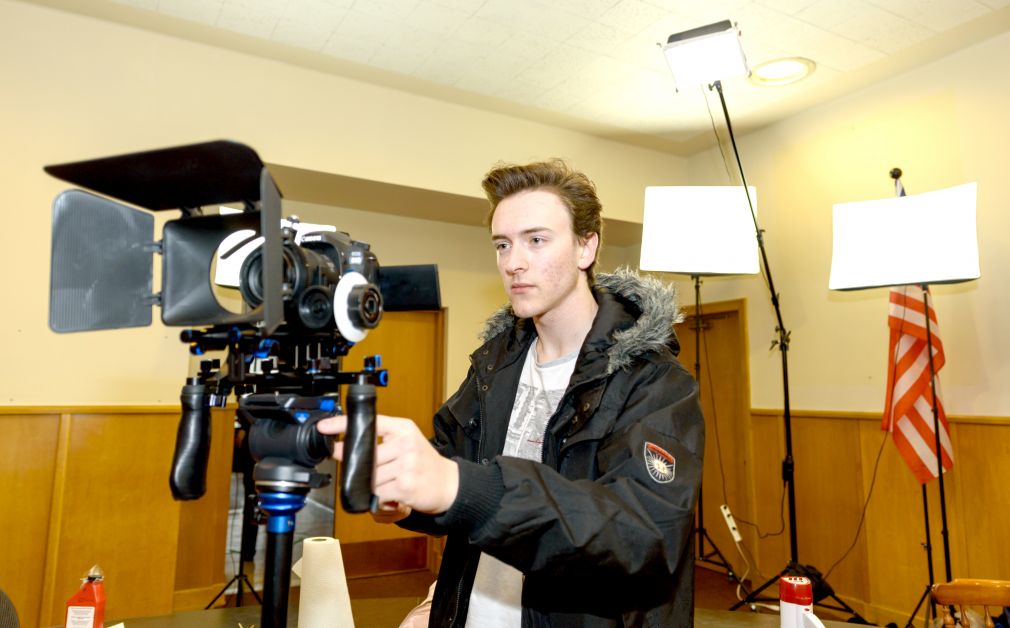 A 17-year-old filmmaker takes on a Hollywood challenge by filming in the Drumheller valley. Brandon Watson of Cornwall, Ontario, is the 17-year-old director, writer and producer of a new film called ‘Supposition’.
The production is filming in Drumheller at the old Courthouse until April 6.
“The Town of Drumheller has been unbelievably supportive and accommodating and so helpful,” said Watson. “Keith Almberg who owns this building has been extremely supportive and accommodating of the production, Julia Fielding with the Town of Drumheller has also been unbelievable getting us connected with the right people and organized, so we feel really blessed to be able to shoot here and work with all these great people that are helping us out.”
The story revolves around a group of first-year law students attending the fictitious Southfield, Colorado University of Law. When their professor, Professor Peterson, (Tahmoh Penikett of Supernatural, Altered Carbon, Battlestar Galactica) is murdered, student Chloe Russel (Zahra Kavyani) is taken in and charged for committing the crime. Fellow student Calvin West (Justin Toth), convinced that Chloe was framed, sets out to discover the truth behind the murder.
Supposition is considered to be a word for reasonable theory which is alluded to throughout the film. “It’s like a fact or something that is supposed but not proven, but it seems pretty reasonable,” said Watson. Watson sees the film as something unique in nature as there is a hefty challenge set in place.
Robert Rodriguez is a director who has filmed many movies such as Spy Kids and Machete. Rodriguez worked with a micro-budget of $7,000 to produce his first film El Mariachi where he broke a Guinness World Record for lowest budget feature film to make $1 million at the box office.
Since then, he has issued a challenge for fellow directors to make a feature film for $7,000 or less.
“That’s what we are doing with Supposition,” began Watson. “We are going for that challenge but more importantly the world record for producing a feature film with this micro-budget and with the goal of making over a million at the box office. We’ve got interest from a few major distributors who could certainly make that happen; and we think with just the story alone of a 17-year-old producing a feature film for $7,000, that it’s not unreasonable to reach for that goal.”
A few scenes will be filmed in High River and Calgary but the majority of the movie will be filmed within Drumheller, mainly at the Courthouse. “That’s the thing about this building that we are in [...] We were just looking for a courtroom and we ended up finding that we could shoot half of our movie here,” said Watson. “This is a very versatile and unique location and I think honestly after we are done here, I wouldn’t be surprised if many other productions start coming out here and booking this place. I would very much advise them to do so.”
The father and son duo could not give Drumheller enough praise for both its welcoming nature and secret hidden talents. “The thing is, there is so much talent here that would otherwise go undiscovered,” said Watson. “Our cast of people here are local actors and some of them have little to no experience but they are so talented that I feel like we are really lucky to have come across this new group of people. It’s like finding diamonds or gold.”