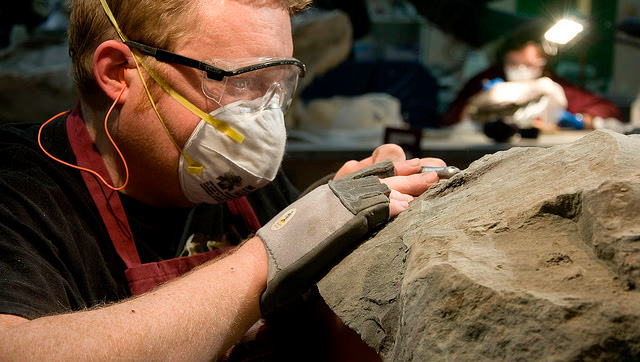 Already making international headlines, Mark Mitchell has been honoured for his many years of service in the fossil world.

The new species of armoured dinosaur, named ‘Borealopelta markmitchellii’, was released to the public on August 3, three months after the grand unveiling of the Grounds for Discovery exhibit in May.

The researchers of the world renowned museum had banded together and decided that Mitchell was a fitting candidate for the new fossil after his many years of preparing the specimen.

“It was pretty great, I put my hands up in the air and cheered,” said Mitchell.

Mitchell has also worked on other impressive discoveries including a shark from the Triassic period, several marine reptiles, nodosaur skulls from Dinosaur Provincial Park, and a large Eotriceratops.

“Having something named after somebody is a big honour,” Mitchell noted.

The overall preparation of the animal took approximately five years and 7,000 hours.

“It was a very challenging specimen to work on,” continued Mitchell. “The rock was very hard and the bone, for the most part, was pretty soft, pretty chalky so it was quite difficult – but in the end, it was all worth while.”

The specimen found that Mitchell worked on was in the nodosaurid family but with the new species name of ‘Borealopelta markmitchellii.’

Alberta in the early 90’s. Afterwards, Mitchell landed a job at the Tyrrell in 1996.

“It took me many years of applying to get in,” said Mitchell. “Luck and timing have a lot to do with it.”

The experienced tech is now working on a Plesiosaur from a separate mine in Fort McMurray.

When the Grounds for Discovery exhibit was released to the public in May, it created worldwide headlines. The extremely rare find was made at the Suncor Energy Millennium Mine north of Fort McMurray in March 2011, dubbed as the remains of the best-preserved armoured dinosaur in the world.

“When this amazing dinosaur went on display at the museum this past May as part of the Grounds for Discovery exhibit, it received international attention from premier publications such as National Geographic, the New York Times, Sky News Australia, Forbes, the Guardian and CNN,” Alberta Minister of Tourism and Culture Richardo Miranda stated.

Dinosaur fans can also now rejoice after new technology has now been released about the exhibit.

“In addition, this project has been well documented in National Geographic with an interactive 3D model of the dinosaur, both how it looked and lived in its day, and how it came to be fossilized for millions of years before its discovery. That coverage continues with a new online interactive graphic that explains the dinosaur’s fossilization,” said Minister Miranda.