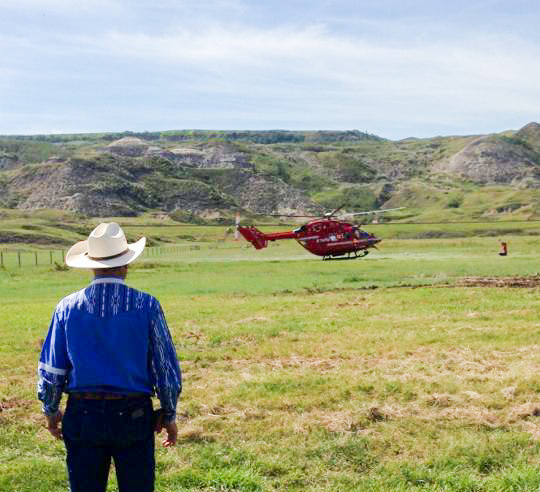 The Rumsey Ride for STARS kicks off Sunday, August 13, at the TL Bar Ranch near Rumsey and Trochu.

As the longest standing STARS volunteer fundraiser in Alberta, this year has lots to offer.

“Most charity organizations maybe only last five or six years as the shelf life but we’re kind of like the energizer bunny, we just keep going and going,” said Rob Richmond, the spokesperson for the event. “It’s kind of the calling card of all the rides and all the charity fundraisers for STARS.”

The volunteer fundraiser for STARS is considered a ‘huge, huge event’ with the trail rides raking in the most cash.

“The bulk of it is for the trail ride, they have it down at the ranch and Ricky and Jamie Anderson and the Lynch’s and have done it for years now down there. Depending on the year there is usually 100 or so riders.

Tons of other functions are available on the day of the annual Ride for STARS event like a special Ducks and Dogs demonstration from Jill Brodie, a quilting prize raffle, and a silent auction.

“My sister has donated probably 20 quilts over the years for the raffle,” said Richmond. “I mean there is so much stuff going on that it’s absolutely crazy.”

A smorgasbord of food will let no one become hungry as a large lineup of well known local groups aid hunger pangs.

To kick off the day, the Rumsey volunteer fire department puts on a pancake breakfast followed by Gooch’s Gang hotdog lunch from 12 to two p.m. Later on in the afternoon from four until 6 p.m., Mary Newton of the Country Cookers puts on a beef supper.

“I say it’s the best barbecue beef supper around and I challenge anybody to it,” Richmond exclaimed.

A STARS booth will be set up for everyone to check out with lots of neat souvenirs.

“They have people there and they’ll sell their swag and I heard they are going to have lots of new stuff this year,” said Richmond.

“That’s what makes it such a big thing is the volunteers,” Richmond highlighted. “It’s not just organizers, it’s the people that come down and help out; the Rumsey Ag Society, the

The trail rides have been dedicated to the Ride for STARS president Ernie Goddard for this year.

“We have all these great folks and volunteers that have helped. Ernie has been the president for years – he still rides and is 80 plus years old,” said Richmond.

Each year as a fun tradition, a contest is made for all the trail riders. Prizes are awarded to both the youngest and the oldest.

If donating money is not an option, time certainly can be the currency. Richmond encourages folks to take part in the event by volunteering their time and energy.

Keep up with upcoming videos created by Richmond. It can be found on their Facebook page here.