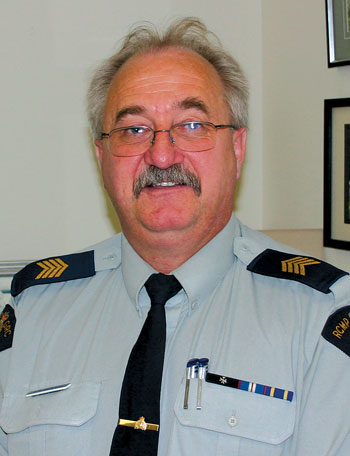 Drumheller’s former RCMP Detachment commander has taken on some interesting roles as he transitions on to retirement.

Art Hopkins served with the Drumheller RCMP as Staff Sergeant for seven years.

He was transferred from the Drumheller Detachment in 2015 where he took on a supervisory role for Southern Alberta.

Today, he has a little more variety in his work schedule; from guarding the former Prime Minister to spending days on Central Alberta waterways.

“I retired as a regular member, but I was re-hired as a reservist,” explains Hopkins. “I am a fully qualified operating police officer, but I can kind of pick when and where I want to work.

One of the details he was assigned was as security for Prime Minister Stephen Harper.

“He (Harper) is entitled to have security and a driver for a period of time,” he explains. “Since there hasn’t been a former Prime Minister out in Western Canada, for some time, there wasn’t enough staffing here. So it was picked up by people that had the training.”

Hopkins spent about two days week beginning February 2016, up until October 2016 working with Harper. The RCMP have since made arrangements to have more staff to take on the responsibility.

This doesn’t mean that he has not been busy, and if you are boating in the area, you just might run into Hopkins out on the lake.

“I am the inland water transport coordinator for virtually every lake in central and Southern Alberta. So any RCMP vessels south of Edmonton, I check up on them, make sure they are being maintained and operated, and I go out and do patrols."

Last weekend he was everywhere from Crawling Valley to Prairie Oasis and then Chestermere.