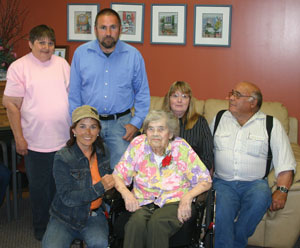 Gladys Wilson has spent a lot of her time healing and nuturing life, and is living a long life of her own as she celebrated her 100th birthday on Monday, July 14.

Wilson has always been known for her love of animals, and has raised everything from skunks to a baby deer.

“I remember once there was a sparrow with a hurt wing, after just a few weeks in my mother’s care, the sparrow was back outside and flying,” said her only son Frank Wilson.

Frank attributes his mother’s longevity to years of hard work.

“She was always out on the farm picking rocks and stacking bundles. She did pretty much everything on that farm,” said Frank.

Gladys grew up in the Hand Hills area near Fish Lake and was married to Clarence Wilson who passed away at the age of 90, in 1995.

“I will always remember the picnics we had with grandma and grandpa after we moved the cattle. The food was delicious, and no matter what, they always had time for you,” said Gladys’s grand daughterAudrey.

While Gladys’s love for animals was never usually a problem, when they moved to the new castle area in 1962 visitors were not always as impressed.

“She had the skunk down in the basement, and one time we had the local plumber do some work down there, he was not excited to see the skunk once he got into the basement,” said Frank with a laugh.

Even though Gladys had an interesting love for all types of animals, her son and grand daughters all agree that what most comes to mind when they think of Gladys, is that, “she was always there for you, not matter what.”