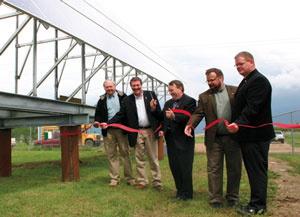 Even on a cloudy day, things are bright and strong for Delia’s new solar project.

In fact, on the very day that saw the unveiling of the solar project, which is now powering Delia’s water pump station, the array of panels was producing surplus energy, sending power back to the grid.

On Friday, June 6, the Delia Solar Project was officially unveiled. Starland CAO Ross Rawlusyk, Starland Reeve Barry Hoover, Delia Mayor Gordon Isaac joined the Honourable Jack Hayden Minister of Infrastructure and Gerhard Schwarz of ATCO Electric to help cut the ribbon for the project that has been four years in the making. The project was a joint effort with Starland County, the Village of Delia, the Village of Munson and the Village of Morrin, all contributing.

“It is just so refreshing to see all of these communities working together and sharing the resources, said Hayden. “Everyone is doing it for the right reasons; to help each other out, to reduce costs, and to do what is right environmentally. It is just so amazing and all of it makes me proud of my constituency.”

The Village of Delia water pump station photovoltiac project is the largest free standing project of its type in Western Canada. It consists of 60 solar panels that converts sunlight into DC power. An inverter converts it to usable power for the pump station. Any excess power generated is sent back to the grid. The array has a peak power of 10 kilowatts.

Judging by the efficiency the project has already created, it is a success. In April of 2007, the water pump station consumed 1,011 kWh, all purchased off the grid. This year in April the array produced 972 kWh, used 534 kWh and sent 438 back to the energy grid.

“The average plant uses between 75,000 to 80,000 kWh per year,” said Starland Reeve Barry Hoover. “We are anticipating a 20 per cent reduction in power purchases. Based on the performance of the structure to date, it looks like payback might be much better.”

The Delia water plant project is just a component of the overall project. By the end of summer Munson and Morrin will both have operating solar arrays powering their water stations.

The project received funding from the Municipal Sponsorship Program. According to Rawlusyk they received the grant in 2004. One of the major challenges in going forward with the project was finding contractors.

Rick Dunsmore of Goosecreek Renewable Energy took on the project. He said the Delia project was a challenge, but its successful completion reflects on the company's reputation.

“Because we have gone this far people are contracting us because of confidence," he said.

One confident partner is the Village of Delia. They are looking into powering their arena, curling rink and community hall with solar power.

“(The arena) is great because you can produce all summer, store it in the grid and pull it out and use it in the winter,” said Dunsmore.

Another challenge had to do with regulatory issues. The project was a pioneer and opened many doors, but it took a lot of work.

“We essentially had to go through the same process as Sheerness, because we are a power generator,” said Rawlusyk.

He said Starland has made a couple of resolutions through the Alberta Association of Municipal Districts and Counties including a call for net metering. This means rather than having a meter measuring power in and another measuring power out, it will measure the net power used, paving the way for individual projects to contribute back to the grid. This is expected to happen in the near future. They also passed a resolution calling on the province to work on alternative energy policy.

“The province has certainly come a long way in developing policy to encourage this industry,” said Rawlusyk.