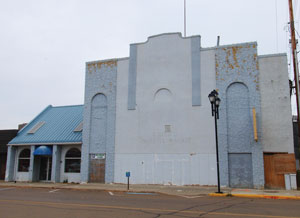 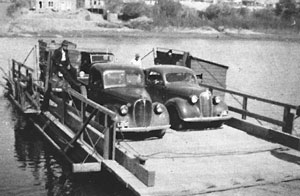 The Red Deer River, which flows from the Rocky Mountains east through the Drumheller Valley, is perhaps one of the most important features of the valley.
During the early part of the 20th century settlers relied upon the river to provide them and their livestock with water and transportation.
However, crossing the river could be a major obstacle.
The only bridge that crossed the river at the time was located in Red Deer. As Gilles Danis of the Homestead Musuem explains, “There were no towns around here, so where are you going to put a bridge?”
Inhabitants of the area had to rely first on fords to cross the river, which could be hazardous, especially when the river was in flood.
To make the dangerous task of crossing the river easier, settlers began to make homemade rafts and ferries and operate them privately. “There were hundreds of ferries all over the prairies,” said Danis.
There were at least nine major ferries that operated at one time or another throughout the valley. The ferries were primarily used to transport people, vehicles, and livestock to the other side of the river.
However, the ferries also served a valuable function as a social hub where members of the community would congregate. The earliest ferries were operated by a large wheel which passengers would “turn and tell stories while going across,” said Danis.
The Alberta government ran the ferries, but commissioned local farmers to operate them in their stead.
The Wigmore family operated a homemade ferry between the Kneehill and Ghost Pine creeks until 1908, when the ferry collapsed and Bob Wigmore drowned. A cable ferry was installed by the government in the same location and was operated by Bob’s father, Sam Wigmore, and John Moyer.
Other ferries were operated by the Russel family in Nacmine, and the Greentrees and Leonhardts in Drumheller. West of Morrin, Rosedale, Cambria, and East Coulee also boasted ferries.
Over the years, as highways and bridges were built in the valley, the ferries disappeared. “Nobody’s going to take the ferry when there’s a bridge nearby,” explains Danis, “except if there is historical significance, like the Bleriot Ferry.”
The Bleriot Ferry, west of Drumheller, has remained in operation for over a century. Andre Bleriot, brother to aviator Louis Bleriot who became famous for being the first to fly over the English channel, was the first operator of what was then known as the Munson ferry.
“Ferries tended to attract colourful people,” remarked Danis. Indeed, Andre Bleriot was originally from Paris and moved to the Orkney District, Alberta. “Talk about a culture shock.”
The Bleriot Ferry is one of only seven ferries operational in Alberta today and serves as one of the tourist attractions in the Drumheller valley. It is estimated that ninety per cent of the traffic is comprised of tourists.
However, the Bleriot Ferry continues to serve as an important crossing. “It’s good for tourists, but not intended just for them,” said Gordon Wilton of Alberta Transportation. “Farmers use it to get equipment across the river, because some farm both sides.”
Other than the Bleriot Ferry there is also the Finnegan Ferry, southeast of Drumheller on highway 862. Like the Bleriot Ferry, the Finnegan Ferry is a tourist attraction, but still used substantially for local transportation.
Residents of the Drumheller valley rely on the bridges that have replaced the ferries that populated the Red Deer River.   However, in the absence of convenience, it was the ferries that nurtured the growth of the Drumheller Valley. The remaining ferries remind us of this historic legacy. 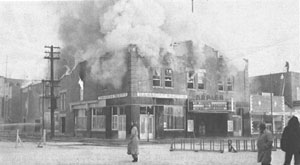