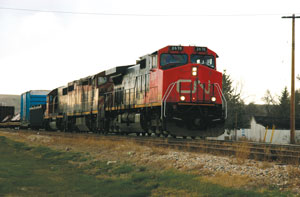 Drumheller is turning over a century, and while the community has been defined by its history of coal mining and exploration, in the early days one key component of making the industry viable was having a way to get its product to market.
This came in the form of steel tracks laid across the countryside.

As Ernest Hlady astutely said in his book Valley of the Dinosaurs, “Without the intrusion of the railway into the valley, Drumheller could possibly still be called Greentree Crossing, with little or no business enterprises.”
In fact in the legendary deal between Thomas Greentree and Sam Drumheller, it is said Drumheller’s motivation to buy Greentree’s land was the coming of the rails.
In 1911, when the first mine was established, Canada was still a very young country. The last spike, joining the east and west coast by rail had been driven only 26 years earlier. However, the rail system grew quickly. By 1905, Canadian North Railway and the Grand Trunk Pacific both had lines connecting Manitoba to Edmonton. In July of 1911, the Canadian Northern had built a line from Vegreville to Munson. The next move was to drop into the valley.
This was completed on November 29, 1911. It wasn’t until the next year, however, that the Midland Bridge was completed.
When the river was traversed in 1912, the first mine at Newcastle already had a spur line built waiting for the bridge. When this was completed the first cars, containing 4,068 tons of coal, were shipped out. These cars went north to Vegreville, and then transferred to the Canadian Pacific Railway (CPR), where it was shipped to Calgary. According to the Hills of Home history book, it was presumed the first shipment went out of province.
Not only was industry connected, but so were people. Residents could now travel by train north to Munson, Stettler, Vegreville, and then across Canada.
Following the opening of the north branch, a southern route out of the valley was completed, heading through Wayne to Langdon Corner, and eventually Calgary.
Another route was completed in 1919; this time it was when the Grand Trunk finished a line from Saskatchewan to Hanna, where it connected with the Canadian Northern line.
However many railways  were losing money in the war years and eventually an Act of Parliament saw many private railways swallowed up by the Canadian National Railways.
The Canadian Pacific railway was also busy at expanding towards the valley. They looked to connect a line from Acme to Drumheller via Carbon. They also worked their way east from Rosedale to Empress. This was completed in late 1928. This included Cambria Bridge. In September 1928, the line west to Acme was opened and able to handle one third of the coal from the valley.
As quickly as the line appeared, as the mining industry waned, the lines fell into disuse. By the mid-seventies the CPR East Coulee line was abandoned, and the stations that dotted the line disappeared. The CNR station in Drumheller closed in 1970.
A freight line continued through the valley, until it was discontinued in 2008.
While the familiar sound of a train whistles no longer blow in the Drumheller valley, there is a chance it may come back. Negotiations continue between local municipalities and CN to revive the line from the Drumheller area to Lyalta.