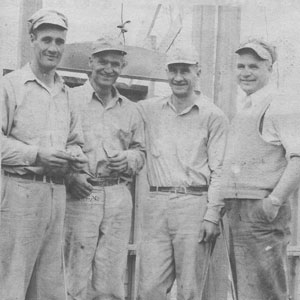 If there was one family that left a concrete impression on the valley, especially downtown, it was the Langford family.
A tour through downtown, looking at the historic plaques on the building, a common element jumps out. The family and its construction business helped to build the valley.
Two brothers, Fred and Herb, married two sisters Ethel and Janet.  By 1914, they were late arrivals to the valley after getting off the train from Portage la Prairie, Manitoba. With homesteading out of the question, they began to work in the Bishop Mine at the base of the Munson Hill and try their hand at farming. They rented a home at what is now the Drumheller airport.
Fred had experience and skill in the construction industry and went back to brick laying. It became a family business when he trained his sons in the trade.
As one son Rollie relayed to The Drumheller Mail in 1988, “I remember we went to the old Central School, which was a wood building back then. As kids do, we used to wish the school would burn down and one night it did.”
The joy wasn’t long lived as school was only out for three days before classes resumed in the basement of the Knox United Church.
To add insult to injury, Rollie worked on the addition to Central School in 1949-1950.
His memories of Drumheller were like the birth of a town. He remembers his family working on the former Drumheller Mail building, the Vickers building, the Western Garage, the Elks, the Dalum Lutheran Church and even a wing of the former Drumheller Hospital, not to mention number of homes in the valley. He remembers his dad working on the former post office, now Schumacher Gough and Company.
Other buildings that were built by the family include the Cummings Hardware, now S&S News, the Leach Block, now Pizza 249, the Alexandra Hotel, the Anderson Block, now Bits and Pieces, Wade’s Jewellery and Sunrise Auto.
The company also worked for the mining companies erecting the transformer buildings or the boiler houses.
Rollie married Telma Folden in 1941 and his father Fred died in 1942. During the war years Rollie was exempt from the service because of the construction business; he recalled it was tough to continue to work because of wartime rations. To get around that, he rebranded himself as a mining construction company because mining was deemed an essential service. Because of this, he was able to get gas and supplies to carry on.
Rollie and Telma raised four children, Fred, Ross and Gaye as well as Larry Folden, whose mother, Telma’s sister, died during childbirth.
Rollie remembers that during the boom, there was even a brickyard in the valley owned by P.S. Brown on Dinosaur Trail. It was short lived, however, because the clay in the valley was not suited for making bricks.
His sons Fred and Ross continued in the construction industry, making it a third generation in the family.
While the valley has seen an ebb and flow of business throughout the core, these buildings are entrenched and have become part of the history and fabric of the valley.  The Town of Drumheller is actively working on an inventory of the Historic Sites of Drumheller in hopes of keeping this heritage alive.