Historian of the community | DrumhellerMail
02072023Tue 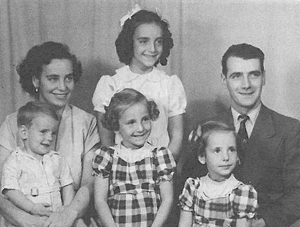 The Drumheller Valley possesses a remarkable history. Whether you’re looking at millions of years written in the rocks or the towns that have grown in the last 100 years the stories are fascinating.
The history of the towns in the valley is recorded in the minds of residents, in journals, diaries, The Drumheller Mail, and in the gigantic The Valley of the Dinosaurs: Its Families and Coal Mines, written by Ernest Hlady.
Ernest John Hlady was born on April 17, 1922, in Edmonton. Soon after, in 1923, his parents, Bill and Rosey, moved to Aerial, then Willow Creek, and settled in East Coulee in 1927. Bill initially operated a coal cutting machine at the Star Coal Mine and then went into business as the owner of the Atlas Cash & Trading Store.
Ernest went to school until 1939, when he dropped out. He had only reached Grade 11.
After quitting school  Ernest worked in the Atlas Coal Mine. He initially was in the tipple dabbing red paint on the coal, quickly rose to a pusher, electrician and mechanics helper, and by 1949 was the youngest machine boss in Alberta.
In 1942 Ernest wed Marion Clarke Armstrong, and had five children, Beverly Anne, Carol Janet, Alana Rose, Ronald Ernest, and Garry Robert.
Ernest was in charge of a crew of eight and oversaw maintenance and the relocation of equipment from the Atlas Coal Mine to the new mine site on the prairies.
When the coal mine let go of most of Ernest’s assistants, leaving him and one assistant to look after all maintenance, Ernest decided to look elsewhere for work.
In 1956, the Hladys moved to Edmonton and Ernest attempted to find work as an electrician. However, a series of tragedies put the Hladys in a dire situation.
In 1957, both of Ernest’s parents died within a month of each other, and Ernest was out of work for 10 months, recovering from a spinal injury. Ernest was unable to pay for the house and eviction was looming over the family.
The generosity of a friend saved them and Ernest’s back recovered.
Soon, Ernest was back to work supervising the wiring of residential construction in several neighbourhoods being developed at the time in Edmonton.
In 1960 Ernest travelled north to aid in the construction of the Distant Early Warning (DEW) Line, the series of radar stations that would warn of Soviet attack. When Beverly Anne was to be married, Ernest went home to Edmonton and remained there working at a steel mill.
Arthritis began to plague Ernest’s knees in the 1970s and by 1979 he could no longer work. Surgery on his legs compounded the issue and guaranteed that Ernest was retired.
This gave Ernest the opportunity to fulfill a lifelong passion. Ernest was always interested in anthropology, the study of man and culture.
For eight years Ernest researched, wrote, and edited the material that would be published in The Valley of the Dinosaurs: Its Families and Coal Mines, perhaps one of the most significant chronicles of the history of the Drumheller Valley.
The colossal book, published in 1988, is not necessarily a chronicle of what happened and when; it is rather an extraordinary collection of the stories of the families that made the area home and the coal mines that fueled the growth of the community.
Ernest passed away in 1998. His passion for the history of the valley lives on.