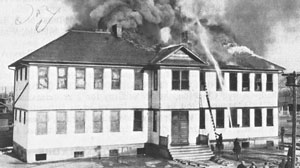 The educational institutions in the Drumheller valley have been providing high quality education for students for nearly a century. Today there are several schools, outreach centres, and a bustling international program.
However, education in the valley sprang from humble beginnings a mere century ago.
The first Drumheller School District meeting was held on July 6, 1911. From there the board borrowed money to build Drumheller’s first school. The board hired their first teacher, Ms. Hollinquist, but she resigned after three months. Oliver McKee came in as replacement and served the district for many years.
The first school was a small building built in the fall of 1911 and opened on January 2, 1912. There were 35 students in its first year.
A second school, the Drumheller Public High School, was completed in 1914. The building boasted four rooms and two additional teachers were hired. Once the newer school was functioning, the old, small school was sold to the Presbyterian Church Board and used as a church for many years.
In 1918, a one room school was constructed in Midland and the Drumheller Public High School added four more rooms. Two cottage style school buildings were erected in 1920 in Parkdale.
In May of 1925 the Drumheller High School was engulfed in a fire. Students and teachers had to use community halls around town until the new brick Central School was completed in 1926.
A brick school was built in Parkdale in 1928. Enrollment swelled rapidly and by 1936 crowding forced the cottages to be used for some classes.
Schools also began to spring up in other areas of the valley, such as the East Coulee School, which opened in 1930 to accommodate the families that moved to the area during the coal rush.
By today’s standards the schools in the valley were a little archaic. Corporal punishment was standard practice. Teachers were encouraged to use the strap for, what would be today, minor infractions such as day dreaming.
“To this day I’m a terrible speller because I got the strap for getting two wrong on a spelling test,” said Vivian Dietz, a former student at the East Coulee School. “I never forgot that and was quite timid about spelling because I was afraid of getting the strap.
“It was very negative,” continued Dietz. “It didn’t enable you to gain confidence and be confident in yourself.”
Another quaint practice of schools in the valley was to post grades in The Drumheller Mail. Nothing was hidden and every mark was posted, including the confidence crushing failing grades. These were also the days when students would be held back should they fail. The observant reader might annually spot the same individuals in the same grade for multiple years.
Despite the harsh environment, Dietz remarks, “The teachers did care about us learning.”
“Schools back then were a lot stricter than they are now,” commented Robin Digby. “It’s interesting that people I’ve talked to that, while it was strict, have a positive attitude towards it.”
A junior high school was built in 1948 on the Central School grounds, and in 1961 connected via a gymnasium and library to Central School.
In 1958, parishioners at St. Anthony’s held a vote for the establishment of a separate school division. The vote was in decisive favour of opening a school and St. Anthony’s School was opened in 1959.
1962 saw the valley’s first vocational school, which shared the impressive building with a high school. The school was built in the east end of Riverside and residents now know it as the Drumheller Valley Secondary School.
In 1967, what would become DVSS had a million dollar addition. The added east wing expanded space to provide vocational education to students. The east wing was eventually torn down in 2009.
Until this point the remaining communities in the valley, East Coulee, Nacmine, Rosedale, Wayne, and Western Monarch were under the auspices of the Red Deer Valley School Division. In 1965, the two school divisions in the valley merged. Unfortunately this centralization, and declining population, led to the demise of the schools in those areas.
Greentree School opened in September of 1968. The school was initially meant to function as junior high school, but as of 1990 it was teaching Grades 4-6, and K-6 in 2003.
The Central School, Parkdale,  and East End School handled elementary education in the valley until 2003, when Central School shut its doors and the students went to Greentree School.
In recent years the Drumheller valley has been drawing attention internationally. “It’s an indicator of the caliber of education that Alberta provides,” said Curtis LaPierre, principal of DVSS. “It’s an area we’ve had to be innovative to help maintain programs for our local students.”
In the past century the schools in the valley have grown from a one room, one teacher operation to an education system that has three large schools and has been bringing students here from around the planet.