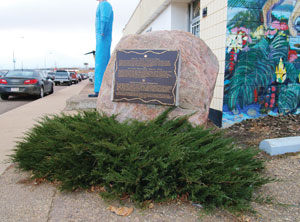 When war was declared on Germany in 1914 and 1939, the first and second World Wars, Canadians went overseas and witnessed the horrors of war first hand.
At home Canadians worked hard to support the war efforts. However, even those who stayed in Canada were not immune to the atrocities committed in the wars.
On August 4, 1914, the Canadian parliament passed the War Measures Act. The legislation granted the government emergency powers that allowed them to suspend civil liberties. The War Measures Act has only been invoked three times: during World Wars I and II, and the October Crisis in 1970.
In World War I those persons classified as “enemy aliens” were the target of the act. Those labelled as enemy aliens were persons of nationalities that Canada, and the Allies, had declared war upon, such as Austria, Germany, Hungary, and Ukraine.
The nationalities mentioned were forced to register with local authorities. Enemy aliens were banned from carrying weapons, leaving the country without permission, reading or publishing material in languages other than English and French, and had to check in with local authorities on a regular basis. It is estimated that roughly 70,000 people, mostly Ukrainians, registered.
The Drumheller area has records of such persecution taking place. A mine strike in early 1918 had some blame attributed to the enemy aliens who worked in the mines.
In July of 1918 John Baluk was fined $50, a large sum during that time, for simply travelling to Calgary without permission. Mike Furnick was fined the same in July of 1919 for failing to report to authorities for his regular check in.
Charles and John Marks, two Germans, were arrested and sent to jail in May of 1919 for the possession of firearms and for making “comments of a revolutionary nature”. There was some suspicion by the authorities and media that the two, who had recently arrived from Winnipeg, were sent to cause agitation and spread propaganda amongst the labour force here.
Unfortunately the situation was even darker. Of the 70,000 who registered, it is estimated that nearly 9000 were sent to internment camps. Most were single males and generally poor. However, a few women and children went as well. The property of the internees was confiscated as well.
Internees were not imprisoned for any treasonous activity, only for their nationality and as a source of cheap labour. Arrest records indicate that some were sent to internment camps for their skills. A Ukrainian carpenter who helped build one of the camps was arrested simply because the camp wanted a carpenter.
Twenty six camps were spread throughout the country. Internees were generally forced to do hard labour. One of these camps briefly operated in Munson from October 13, 1918, to February 25, 1919. Roughly 65 internees were present.
Unfortunately records are scarce as to what exactly took place in the Munson camp. Many of the records were deliberately destroyed afterwards. The only coverage in the papers during that time simply reported that enemy aliens were being held in Munson and were working on the C.N. railway, local agriculture, and mines.
Conditions in the Munson camp were deplorable. During the long work day internees were forced to do hard labour and were later locked in railway cars during the night. It is doubtful that internees were remotely comfortable, as it is difficult to imagine that a steel railway car would provide much insulation from the frigid prairie winter.
In late February the internment camp at Munson took to the rails and went to Eaton, Saskatchewan. It is ambiguous as to why the camp moved, but the flu pandemic and unrest amongst the internees are believed to have been the causes. Eventually the internees ended up in Nova Scotia where they were deported.
The unjust internment of so many during World War I is now formally recognized by the Canadian government as of 2005. In 2008 and 2009 funding has been provided by the federal government to projects that commemorate the experiences of those who suffered internment during World War I.
Internment and persecution of enemy aliens is one of the darkest chapters of Canada’s participation in World War I. Sadly, a small part of that chapter was written on the rails near Munson.