Hockey fans have cause to celebrate this weekend.
On Saturday, September 14, the Drumheller Dragons will make their first regular season appearance at home. The puck drops at 7 p.m. at the Drumheller Memorial Arena.
There are a number of fresh faces on the roster this year, but fans will recognized quite a few veteran Dragons, including Ryan Suchorab, Mitchell Cook, Tyler Kerner, Colton Vannucci, Hunter Mills, Tyler Poskus, and Dakota Zaharichuk.
Drumheller’s very own Shayne Gwinner will take to the ice in the orange and black as well.
The Dragons started the regular season last weekend with two wins, 5-1 over the Canmore Eagles and 3-1 over the Camrose Kodiaks.

The Drumheller Dragons are preparing for their home opener on Saturday, September 14, at the Drumheller Memorial Arena. The Dragons began the regular season with two wins last weekend and the Dragons will be looking to keep the momentum building when they face the Brooks Bandits tonight and the Camrose Kodiaks on Saturday.

The home opener on Saturday will feature a rematch between the Dragons and Kodiaks.
Everyone is welcome to attend and cheer on the Dragons as they embark on another roaring season in Drumheller.

The Drumheller Dragons have invited some of the brightest and toughest names in hockey for its second annual Evening of the Stars.
The team has invited Hall of Famer Bryan Trottier and legendary tough guy Marty McSorley. Dave Semenko was originally slated to appear but was unable to attend. In his stead, Claude Lemieux, one of only 10 players in history to win a Stanley Cup with three teams, will be 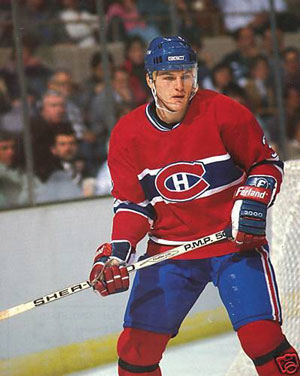 appearing.
Former hockey player–turned broadcaster, Jim Ralph, fills out the bill for a night of fond hockey talk from some of the game’s best.
“The biggest thing is these guys are a little bit removed from the game, but they are still very popular, and still do a lot in smaller communities. I think people in our generation will love to hear the stories they can tell,” said Dragons coach Brian Curran.
Trottier had a legendary career. The Saskatchewan native hit the NHL with a storm and was Rookie of the Year, playing for the Islanders during the 1975-76 season. He has six championship rings as a player and one as an assistant coach. Four of these were with the Islanders between 1980-1983. He played in New York until 1990, when he was moved to Pittsburgh. There, he was part of two more championship teams.
He retired in 1994, at the time he was ranked sixth in NHL point totals.
“Bryan Trottier is a Hall of Fame hockey player, and that stands for itself,” said Curran.
While Trottier had six rings, Lemieux had four, his first being with the Canadiens in 1986.            In 1990, he was traded to the Devils and earned his second ring in 1995. The next season he was traded to the Avalanche and won ring number three.
In 1999, he was sent back to New Jersey and in 2000 won his fourth championship. He retired with 80 playoff goals, ninth in NHL history.
Marty McSorley was an important part of two Stanley Cup winning Edmonton Oilers squads, but scoring was not typically his first responsibility.
He made his NHL debut with the Penguins, but it was with Edmonton that he became household name, joining the hockey dynasty alongside Gretzky, Messier and Kurri.
In 1988, he was part of “the trade” and was sent to Los Angles with Gretzky. He was with the Kings until 1993, when he was traded to Pittsburgh. This didn’t last long and he was back in LA to assist Gretzky break the all-time scoring record. In 1999, his NHL career ended with the Bruins.
Curran played at the same time as McSorley and it stands to reason the two may have went toe-to-toe at one time or another. All of that is left on ice.
“One thing people have to realize that most guys I knew and fought with are some of the greatest guys you’ll ever meet. You just played a role. But Marty played a significant role as a player, he was much more developed than I was for sure,” said Curran.
The Evening of the Stars is a great chance to hear stories from some of the game’s greats and support the team. Throughout the evening there will be a dinner, silent auction, live auction and draw prizes. Some of the silent auction items are incredibly rare pieces of sports memorabilia, including dozens of autographed jerseys, and even a Montréal Forum seat.
The live auction items are unique travel experiences. There is everything from luxury salmon fishing excursions to the opportunity to judge a World Tropic Bikini Contest in Las Vegas.
While the evening is in support of the team, Curran said the experience for the Dragons will be just as important for them as individuals. He said they are inviting at least one of the featured guests to come and address the players in the locker room.
“When you have players that are as well known as these guys, the team will look to them like there is no tomorrow. They will inspire them to be better. And it could have a big impact on them learning what it takes to be a pro. There are a lot of tough roads and a lot of learning,” said Curran.
The Evening of the Stars is on Friday, September 20 at the Badlands Community Facility at 5 p.m. For more information or tickets, contact the Dragons office at 403-823-2022, or email pam@drumhellerdragons.ca 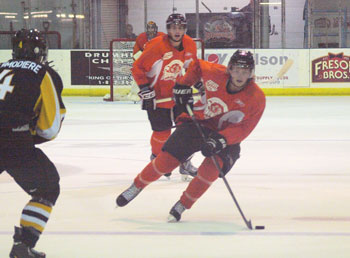 The regular season begins tonight for the Drumheller Dragons as they head to Canmore to face the Eagles. They then travel to Camrose on Saturday to take on the Kodiaks.
“We’re playing against a team (the Eagles) that is very well coached. We played against them in the first round of the playoffs last year and had a tough series, so I expect a tough first game,” said Brian Curran, head coach and general manger of the Dragons.
The Dragons swept the Eagles in the first round of the 2012/2013 playoffs.
Over the past two weeks the Dragons have been busy with training camp and preseason. Overall, the Dragons went 3-3 over the preseason.
The Dragons opened the preseason on August 26 with a 3-2 win in overtime in Camrose. The next evening, they lost a close game to the Brooks Bandits. The Dragons were up 5-2 heading into the third, but the Bandits, the AJHL champions for the 2012/2013 season, came back to win 7-5.
“In the Brooks game, we played great for two periods and controlled everything. Then, in the third, they came back, and we panicked and started playing like individuals,” said Curran.
The Dragons notched another win on August 30 in Lloydminster. The next night, they lost 5-1 against the Kindersley Klippers of the SJHL.
On Monday, the Dragons lost 3-2 in a shootout at home, their only home game of the preseason, against the Olds Grizzlys, but won 5-1 the following night in Olds.
Curran feels there are quite a few positive results from the preseason.
“I feel our goaltending has done very well in camp. Curtis Kipp and Steven Glass have been good additions. Our defense has played well. We have some young defensemen, who I think will be very good hockey players as time goes on,” said Curran.
However there are a few areas Curran feels need to be improved.
“For our forwards, I think we have some pretty good strength through all our lines, but we need some of veterans to pick it up. They played okay, but not to my expectations. We need that to change,” said Curran.
The Dragons’ coaching staff was busy making the final cuts to the team earlier this week on Wednesday.
“It’s a time where you’re trying to find players and see what they can do. It’s great to win, because it builds confidence, but at the end of the day we’re trying to make decisions on players,” said Curran.
The Dragons will be looking to start the season on the right foot tonight against the Eagles. Their first home game will be on
“It’s the first game, so everyone is a little excited and nervous. There are still a lot of question marks. It’s a road game and to be successful, you have to win on the road,” said Curran. “I want our boys to give it all they got, work together, and play as a family.”