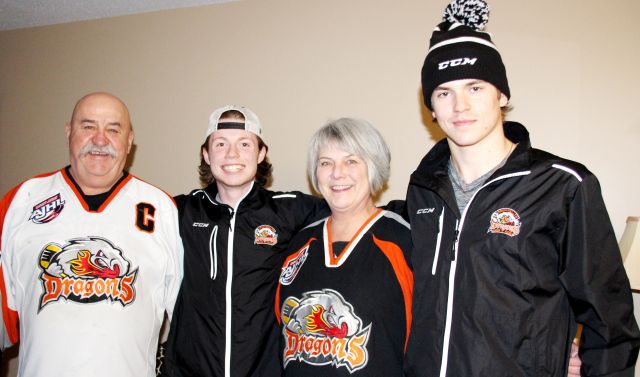 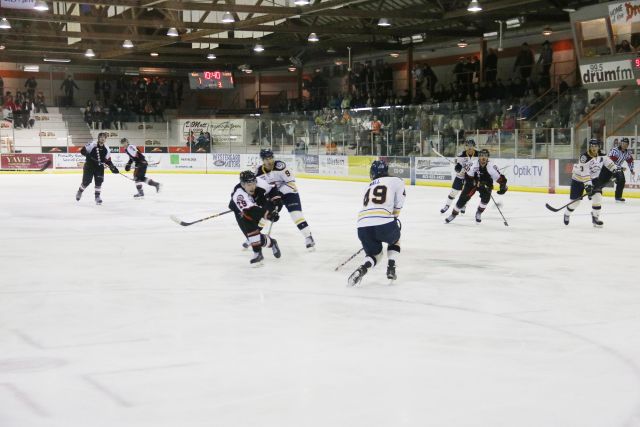 Clint Filbrandt scored his second shoot out winner in less than a week as the Dragons downed the Calgary Mustangs 3-2 Friday night.

The Dragons and 569 fans hosted the Mustangs at Drumheller Memorial Arena on February 26.
Mason Fischer drew first blood for the Dragons just three minutes in, but Calgary tied it up six minutes later. The two team remains tied until the 12 minute mark of the third, when the Mustangs took the lead 2-1.
It looked bleak, but with less than 3 minutes left Chaydan Lauber tied it up for the Dragon, and forced overtime.
Calgary outshot the Dragons 4-1 in the extra period, but it went to the shoot out where Filbrandt scored the winner.
This makes four in a row for the Dragons as they head into the  last two games of the season. They are in Canmore this Friday to take on the Eagles, and then at home to wrap up the regular season Saturday versus the Camrose Kodiaks. 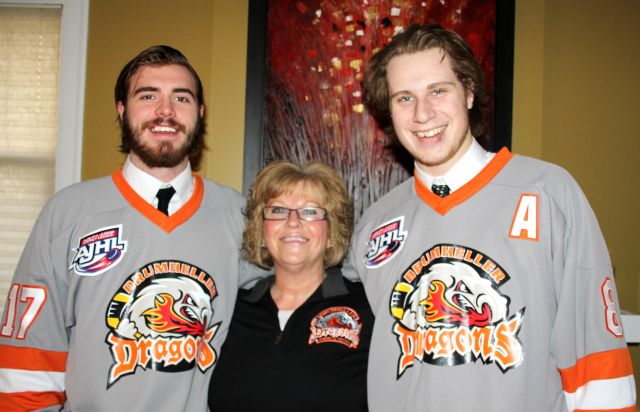 The Drumheller Dragons have 17 billet families to host up to 23 players during the season and Corrine Collett spoke with The Mail about her experience.
Collett had three sons who grew up playing hockey and she was always the manager of their teams and their dad was always the coach. “I’ve been involved with hockey for over 18 years.” said Collett.
Currently, Collett has two players, #17 Clint Filbrandt from Calgary and # 14 Matt Muzyka from Connecticut.
“These billeted kids come into your life and they are part of your family from the minute they get here.” said Collett. When speaking with The Mail about day to day living with two players, Collete said:  “Depending on the individual player, as they have different eating habits, and if they eat fruit, vegetables, meat as well as Gatorade, bottled water and protein bars, it can be a little bit more expensive. Game night, the players mostly eat pasta, chicken or fish, perhaps a spinach salad or something similar to that. They don’t really eat a lot at mealtime and it is no different than your own kids around home. The difference is that players just eat all day.  It’s always nutritious, not a lot of junk food, mainly protein snacks, fruits and vegetables. One of my kids came from Connecticut and doesn’t have his own vehicle but his roommate does and they look after each other.”
Collett continued, “I’ve had the same kids year after year, but last year they both left for the WHL,  Ryan Jevne who now plays for the Tigers in Medicine Hat and Carter Czaikowski who plays for the Portland Winterhawks. I keep in contact with every kid I have ever billeted and one player, Harrison Hendrix is now in his third year at Queens University in Kingston, Ontario and every year at Christmas he calls and he tries to see her every summer.”
“It is very rewarding. I have been so lucky, the greatest kids, and it’s mostly fun and they grow up before your eyes, it’s pretty cool. Billet families are provided with season passes for home games and I’ve attended every single game and sometimes go to the away games. Then the Dragons have their windup banquet and the kids pack up and they’re gone. It’s pretty tough to see them go.” expressed Collett.
If you think you would be interested and your family would be a good match, please contact the Dragons Billet Coordinator, Corrine Collett (403) 821-4502 or email her at corrine@canalta.com or corrinecollett@gmail.com