Drumheller wanted to keep their four game winning streak alive, when they faced the Calgary Canucks on October 21.
The Dragons picked up two of a possible six on a week on the road, first stop; Calgary.
Drumheller opened the game with a power play goal in the first from Robert Nocera.
Sean Pollard from the Canucks tied it with a minute and 50 seconds left from a power play goal. 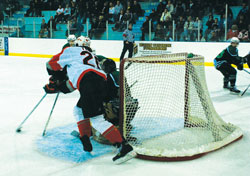 The Dragons are where they want to be, playing great hockey, winning games, and back on top in the Rogers Wireless South. The Dragons claimed the division’s top seat this week. After an 8-0-0 streak with two overtime losses, morale, discipline and energy are all up. “We’re on a roll right now so guys are holding each other accountable, and we’re holding them accountable. They are coming to the rink every day having fun,” said assistant coach Jason Hegberg. “They are expecting to win every time they step on the ice.” This week saw the Dragons win all six points made available to them playing the Okotoks Oilers, Drayton Valley Thunder and the Canmore Eagles respectively at home. Again the tough Dragons offense put in 14 goals over the three games, but this time they held their opponents to just six. On Tuesday, October 14 the Oilers were in the Dragons’ Den, and opened the scoring on the powerplay after a scoreless period. Trevor Smyth tied the game to end the second period. Okotoks got the jump on the Dragons and went up 2-1, but less than a minute later Jeff Young tied the game again. Five minutes later Okotoks went up 3-2, but then Drumheller went on a tear. Erik Slemp scored his first of the game on the powerplay, and then two minutes later Smyth put the Dragons up 4-3. Robert Nocera and Scott Kennedy each dropped a puck into an empty net to end the game 6-3. The Dragons had a goalie to beat on Friday night (October 17) when they took on the Drayton Valley Thunder. Drayton Valley led after the first period, but at the 13-minute mark of the second, Patrick Bartoshyk tied up the score. Four minutes into the third period Justin Morello scored the winner. The Dragons outshot the Thunder 34-26. On Saturday night, again the opposition scored the first goal of the game, but Bartoshyk evened the score with the Canmore Eagles before the first period was up. Justin Faryna got the Dragons’ momentum going in the second with a short-handed goal only 1:55 into the first period. Two minutes later he followed it up with a powerplay goal. Cam Lamoureux scored with nine minutes left in the period, putting the Dragons up 4-2 after two. Five minutes into the third period Trent Colberg put the game way out of reach, and then Young scored short-handed. Final Score: Dragons 6; Eagles 2. Hegberg says the team has a great pool of talent to rely on, but it still needs to work on the back end. “First and foremost we have a very talented hockey club, that’s a no brainer. It’s cliché, you can have all the talent in the world, but if you are not on the same page, then things don’t work. Right now we’re getting there, but we’re not there yet?” said Hegberg. “We got enough talent to win hockey games by scoring a whole bunch of goals, but we’re still not where we want to be defensively, but we are definitely making huge strides.” He says the team has even more potential. “We’re in first place, and that is where we want to be. Coming from a coach’s standpoint and the players standpoint, we still think we are better than what we have shown, defense is where we need to get better and the guys know that.” The Dragons are on the road until Wednesday, October 29 when they take on the Olds Grizzlys at home.

The Dragons have the firepower this year on offense, but so far the main challenge has been on the defensive end.
The Dragons hit the road last week for three in a row, away from home to play Brooks, Fort McMurray and St. Albert respectively. They came away with one win and two losses.
“Our challenge right now is to keep pucks out of the net,” said coach Rob Hegberg. “We’re scoring enough goals to win games, but we’re allowing more goals than we score.”
The Dragons first stop was in Brooks on Tuesday, September 16 to take on the Bandits. Team captain Trent Colberg opened the scoring in the first period as the Dragons peppered the goal with 17 shots to the Bandits 6. The second period saw no scoring, however just 31 seconds into the third period Robert Nocera found the net. The Bandits scored three minutes later on the powerplay.  With a minute left, Justin Faryna scored to put the game out of reach, 3-1.
“We played some good defense,” said Hegberg.
The Dragons were in Fort McMurray on Friday, September 19 to take on one of the hottest teams in the league. The Oil Barons have started the season with a 6-1 record. The two teams traded goals to end the first period with a score of 2-2. Justin Morello and Erik Slemp each scored in the first. Slemp added his second of the game 10 minutes into the second period, however the Oil Barons put it out of reach in the third period with three more goals. Final score: 5-3.
“The problem right now is we are giving up a lot of goals that other teams don’t have to work for,” said Hegberg. “When I look back at the goals we scored, we had to work hard, but then we give up easy ones so we’re working against ourselves.”
The same pattern continued on Saturday, September 20 in St. Albert. The Dragons were spitting fire right out of the gate with Nocera’s short-handed goal five minutes in.  He then assisted Jeff Young’s goal five minutes later to put the Dragons up 2-0, to end the first period.  The Steel tied it after two, and in the third period the Dragons went up 3-2 with Nocera’s second of the game. St. Albert however put together three straight to win 5-3.
“It was a complete mental breakdown and defensive breakdown in the defensive zone, and our penalty killing not doing a good enough job to shut down the powerplay,” said Hegberg.
He says it is time for the players to focus in on defense and sticking to the game plan.
“They’ve got to make a decision. They either have to stick to the game plan and follow what we are trying to do defensively, or we’re going to have to make some changes. Something has got to happen, we’re giving up too many of these opportunities,” Hegberg said.
‘I’d feel worse if we weren’t scoring goals. From the red line to the offensive goal we are doing some great things…we just have to bear down on defence, and it is not just goaltending. Goaltending has to be better, our defensemen have to be better and our forwards have to be better, from the red line to the net.”
The Dragons were still on the road Tuesday, September 23 in Canmore (results not available as of press time), and are back at home this Thursday, September 25 to take on the Olds Grizzlys.