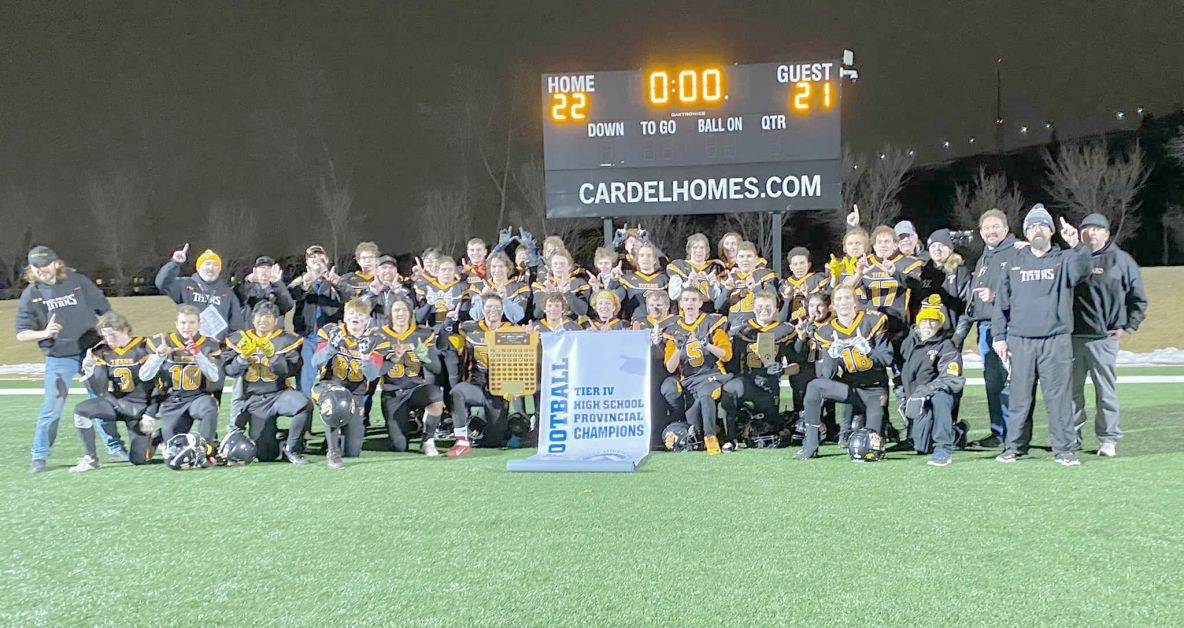 The Senior Drumheller Titans achieved their goal of winning the Tier IV provincial championship, and it was a nail-biter from beginning to end.
The Titans battled their way to the top and the honour of playing in the Alberta Bowl. As did the St. Paul Lions.
They met on the field in Calgary on Friday, November 25.
The two teams, while different, were well-matched. At no time did either team lead by more than a touchdown.
“They were huge, and they brought the heat early on offence. They were trying to take away our ability to set up and make passes and routes, and they were doing a good job of it,’ said Coach Ken Fournier. “They were doing a really good job of taking away passing lanes. And of course, when they got the ball they could run it. Their full-back has to be 260 pounds.”
Because of this, the Titans had to make some adjustments on the fly. The team showed composure.
“As part of our game plan, we knew we had certain areas to attack on the run. We used those early,” explained Fournier.
“The first half went how we wanted it. We made some adjustments at halftime, and so did they. What it meant was they had such a strong running attack for us to be passing a lot, it was very dangerous. If we would have stalled out on one or two drives in that second half, the way they could chain together first downs, it would have been over.”
The Titans decided to fight fire with fire and kept the ball on the ground and eliminated the Lions’ ability to have the ball.
“It's not pretty, but when you are already down two runningbacks, and we took another injury. So we were down some key personnel. The boys knew what they needed to do to get it done, and they did it.”
The Titans were leading down the stretch, but St. Paul scored with seven minutes left and then converted for two points to tie the game at 21. The team showed discipline and controlled the ball for six minutes on their drive.
Battling to the 10-yard line, the Titians opted to punt through the end zone for a single point.
It was enough for the 22-21 victory.
“Taking just under seven minutes off the clock and kicking for a single point, and then letting the defence do what defence does on a long field, that paid off for us,” said Fournier. “I never thought going into that game that we would be winning it by a rouge. But we did plan for it before that drive. When St. Paul called their last time out, we talked to the boys about it.”
Coach Fournier says the victory speaks to the team’s character and preparedness.
“Of course, the receivers and the quarterback want to throw the ball more but there is risk involved with that, and missing key guys, everything changes. Our guys settled into the game, making sure they were taking care of business when they needed to,” said Fournier.
“The biggest part of a championship game like this is the guys being able to show up and be prepared. We always tell them being a champion is the decisions you make every day, not the banner at the end of the year, and that is the mentality they have to carry throughout the season to get to that.”
The team is losing 10 Grade 12 players come next season, however, Fournier is confident they will have a solid squad on the field when it fills a handful of key spots.
“Next year we will be in good shape,” said Fournier.
He is also appreciative of the Titans family that has supported the team, from the volunteers, to the association and the fans.
On Saturday night the team was honoured at the Drumheller Dragons home game.
“It was awesome for them to go from winning and coming home, and then have the community recognize them,” said Fournier. “We have been very lucky to have the community support and the volunteers we have had for so long.”
“The team really enjoys playing in front of a Drumheller crowd, that is a big part of it, and the guys feed off that stuff and it is awesome to see.”