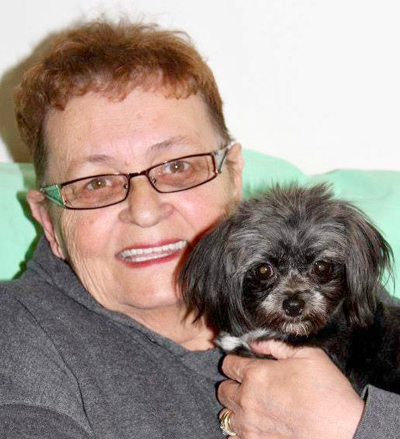 It is with broken hearts that we announce the passing of Norma Carol Campbell (nee Weston). Norma was the beloved wife and soul mate of 55 years to George Linton Campbell, who predeceased her on February 17, 2016. Their monumental love for each other will last for eternity. Norma passed away suddenly at the age of 76 on December 17, 2020, after very strongly and bravely struggling through complications with pneumonia.
Norma was born in Winnipeg and later moved to Calgary, where she met her treasured husband in a meeting of chance on a day trip on the road- one of her most loved stories. Norma’s favourite thing in the world was to be with her immediate and extended family, as much as possible. She talked with much pride about her children and grandchildren, and never missed an opportunity to share family news. She also kept busy with numerous friends and loved visiting and chatting with everyone, in person, and on the phone. Norma had a true passion for camping, spending time outside in the sun, and enjoying the beautiful Rocky Mountains. With her family, she took countless month-long camping trips through Alberta and British Columbia, with her absolute favourite places to stay being Penticton and the Kananaskis. Norma’s true love for all animals was a constant her whole life. She was always excited to see any animal in nature and spent long road trips pointing out every creature that she could see to her family. She devoted true care and attention to all of her beloved pets over the years, and never missed an opportunity to interact with any dog or cat she saw. Later in life when Norma wasn’t able to have pets due to building restrictions, she dedicated many hours to volunteering at the Drumheller SPCA, where she found true joy in spending time with and helping animals in need. Norma endearingly ended every single phone conversation over the years with “bye-bye for now”, and that is how we wish to think of her passing- not as a goodbye, but a ‘bye-bye for now’.

Norma will be forever remembered and loved by her children - her eldest son, Stacey (Marcia) of Hanna, and her daughter Jaime (Ryan) of Youngstown. She is also survived by her two cherished grandchildren, Aiden and Emily. She will be sorrowfully missed by her sister Marlene, of Dartmouth, Nova Scotia, as well as by her much-loved niece and nephew, Nancy (Don), and Philip, of Calgary. She will be dearly missed by countless other family members and friends. Besides her adoring husband, Lynn, Norma was predeceased by her parents, John and Josephine, and brother-in-law, Gordon. In keeping with Norma’s wishes, no formal funeral services will be held. As Norma’s love for animals was so strong, for those who wish, the family requests that memorial donations be made directly to the Drumheller & District Humane Society. 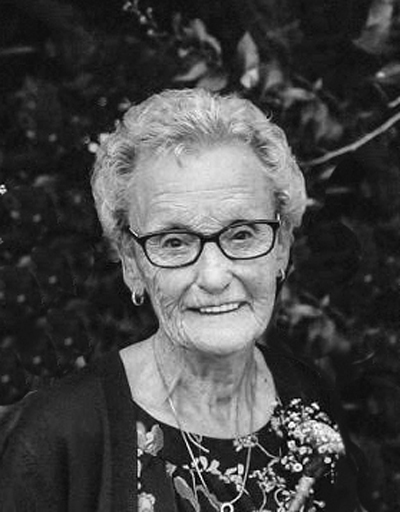 It is with extreme sadness that the family of Rita Mary McKinnon announces her passing on Friday, December 18, 2020, at the age of 87. Rita leaves to mourn her very loving husband of 66 years, Allan McKinnon. Their love for each other grew stronger and deeper as time went on. It was a relationship their family looked up to, one for the history books. She also leaves behind her children, Jim (Kristine), Malcolm (Twila), David (Shirlee), and Barb (Grant) Bishop; grandchildren, Jennifer (Mark), Christopher, Burgandy (Troy), Curtis (Krista), Tiffany (Riley), Justin (Megan), Matt (Randi), Paden, Colton (Tonya), Courtney (Jon); and 11 great-grandchildren. Rita was born in Michichi, AB, and met the love of her life at the age of 16 at the Drumheller High School Dormitory. They spent their early marriage in Rosebud and then moved to Standard in 1969, where Rita was a lifetime member of the Lionettes. Rita loved to travel, curl, snowmobile, dance, and generally have a good time. She always looked forward to drives in the mountains with her family and some of her greatest memories came from the many camping expeditions that she and Allan did together. Rita was one of a kind; she was feisty, thoughtful, fearlessly protective of her loved ones, and had the biggest heart for her friends and family. Mac (Grandma) took tremendous pride in all her kids, grandkids, and great-grandkids. She leaves behind a huge hole in the hearts of many, but we were so blessed to have had her in our lives. The family wishes to thank the staff at the Wheatland Lodge for the exceptional care provided to Mom. Due to existing covid restrictions, no funeral services will be held. In lieu of flowers, donations may be made to the Standard Municipal Library. To send condolences, please visit Rita’s obituary at www.wheatlandfuneralhome.ca 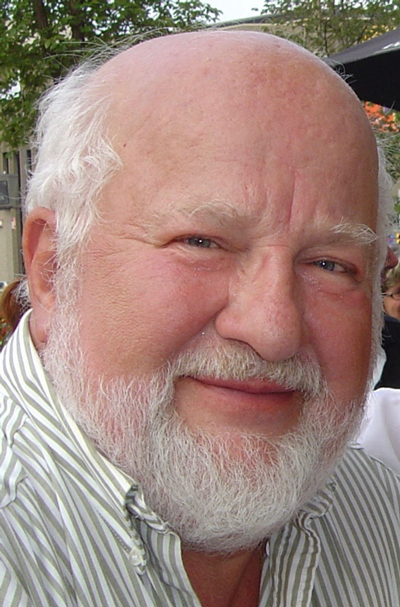 We are saddened to announce the passing of our Dad, Ralph Gutwald, after a long struggle with health issues. Throughout the past few years, he was the epitome of strength, courage, grace, and of course, the stubbornness of his German heritage.
Dad was born in Brux, Republic of Germany in 1933, which later became part of Czechoslovakia. When World War II broke out in 1939, his family was shipped on trains to internment camps with nothing but a suitcase, where they lived in squalor for over a year. There were many years of hardship living in Nazi Germany, including a period living in another camp post-war. The horrors he witnessed left an indelible impression, yet he managed to find ways to be a typical boy, with stories of stealing “artifacts” from sleeping Russians and digging underneath the internment fence into the forest to explore--much to his mother’s consternation and worry. And worse, collected and disassembled grenades and other acquired weapons in the back shed. Imagine his mother’s surprise when that was discovered during an inspection.
When he was 14 years old, he commenced his journeyman mechanic training and became a full-fledged mechanic by the time he was 18. At the young age of 19, not knowing the language and just after WWII, he decided to immigrate to Canada to find work. He docked in Montreal in December 1952 and made his way by train to Saskatoon where he was employed as a diesel mechanic for CP Rail. Dad’s deepest desire was to become an aeronautical engineer. However, a faulty furnace in his boarding house resulted in carbon monoxide poisoning. It impaired his memory, studying became difficult, and he was unable to pursue that dream. He made up for that loss by achieving his private pilot licence in his 40s, and his passion for aviation stayed with him until the end.
Dad moved to Edmonton in 1956 when he was offered a job with M&P Trucking, and concurrently, attended St. Joseph’s High School to improve his English. He met Mom while attending school and he was smitten. They married in 1958, and being good Catholics, started their family soon after.
Dad was always resourceful and resilient. They moved to Drumheller in 1963 after accepting a position as an automotive teacher at the new high school. Conditional upon employment was that he pursued his teaching certificate, travelling back and forth to Edmonton to attend University of Alberta classes for four years while still teaching school. He received his teaching degree in 1968. During the summer months, he worked in the oilfields as a diesel mechanic to supplement their income.
Mom and Dad loved travel, new experiences and entertaining, and they had the best backyard pool parties. Dad taught all of us the value of hard work. He told us if we wanted a swimming pool, we would have to help dig it. By hand. And we did. But we had decades of enjoyment in that pool…even skipping classes and bringing friends over during hot June days. And the pool was a magnet for our large family, right down to his grandchildren. Dad was a real renaissance man: in addition to tinkering with anything mechanical or technological, he loved to cook and sew, often to the chagrin of his daughters who had to confess their Dad made their dresses. We didn’t appreciate this about him until much later in our lives.
Dad was so proud of his family and they were always his priority. His children are left to mourn his passing and rejoice in his life; Craig (Judy), Catherine (Patrick), Shelley (Dale), Licia, and daughter-in-law Dixie. He was Opa (and sometimes Santa) to his 12 grandchildren and 9 great-grandchildren, with another on the way. Dad is survived by his younger brother Volker in Germany and is predeceased by his parents Eduard and Aloisia. Dad’s saddest moments were when he lost his eldest son Mark, daughter Alyson, and grandson Brenon. He never recovered from the sudden loss of Mom in 2014 after 56 years of marriage. We are overjoyed he is with her and the rest of his loved ones now.
Due to the pandemic, so many of our family and close friends were unable to see Dad in his final months, including his very special friend Lisa. Being a humble man, he underestimated the impact he had on young students as an educator, and so many people have reached out to tell us how he made school worthwhile and inspired them to pursue their own goals. We have therefore decided we will plan for a large gathering when restrictions on group events are lifted. The specifics of his Celebration of Life will be announced at a later date.
We must acknowledge and recognize the exceptional care Dad and our family received during this challenging pandemic period, and the past few weeks. We are forever grateful for the outstanding professionalism, compassion and caregiving of Dr. Amanda Randolph, Pharmacists Kevin and Carmen, Nurses, Aides, and LPNs, especially Jennifer, Lise, Kathy, Kim, Jolene, Helen, Asha, and Hazel. Although we may have missed a few names, your contributions to Dad’s comfort and the relationships you formed with him are appreciated from the bottom of our hearts. It is important to us that for those who wish, memorial donations may be made in Dad’s name to The Drumheller Area Health Foundation, specifically directed to Continuing Care.
Courtney-Winters Funeral Home in care of arrangements. 403-823-2666.